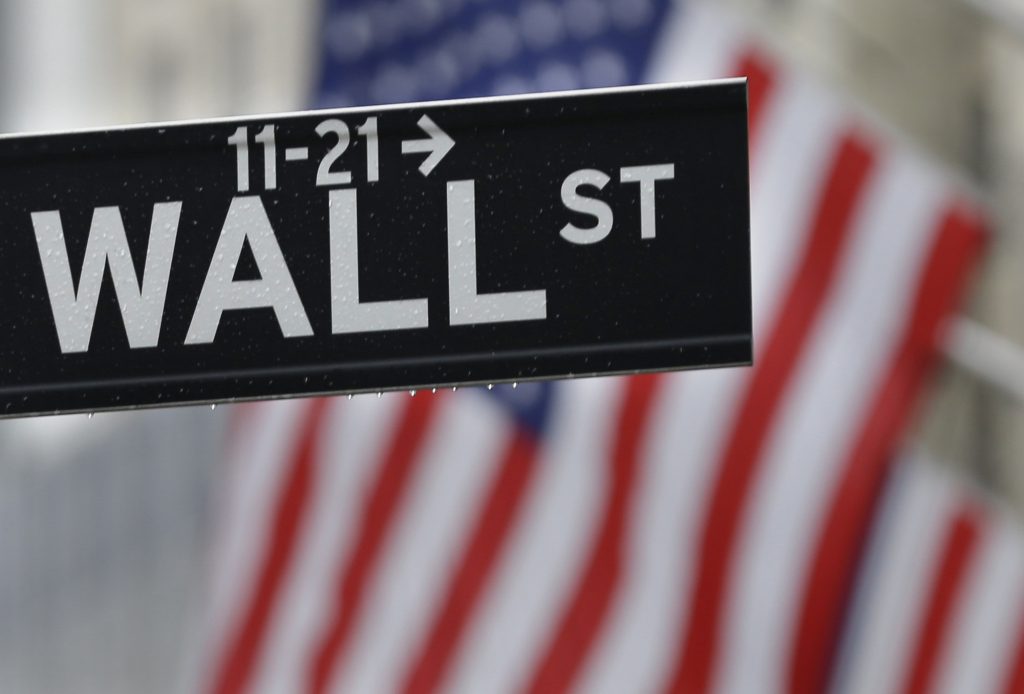 U.S. stocks are falling on Tuesday, following weak fourth-quarter results from companies including UPS and Under Armour. Industrial and technology companies are down the most as investors move money into bonds and stocks that pay large dividends, like utilities. The Standard & Poor’s 500 index is on track for its fourth consecutive loss.

The S&P 500 is on the verge of its longest losing streak since before the presidential election in November. But the losses have been fairly small, and other indexes haven’t lost much ground. The Nasdaq set an all-time high on Friday.

SHOELACES UNTIED: Athletic apparel maker Under Armour is plunging after investors were disappointed with its fourth-quarter report, which included higher expenses. Under Armour also issued a weak full-year forecast and said its chief financial officer is leaving. The stock tumbled $7.31, or 25.3 percent, to $21.63. It dropped 30 percent last year and is now trading at its lowest price in two years. Rival Nike also lost 63 cents, or 1.2 percent, to $52.45.

RETURN TO SENDER: United Parcel Service sank after the package delivery company forecast an annual profit that was far smaller than analysts expected. UPS expects to earn no more than $6.10 a share this year while FactSet says experts expected $6.15 per share. UPS gave up $7.66, or 6.5 percent, to $109.37; and FedEx fell $5.07, or 2.6 percent, to $188.18. That helped pull industrial companies lower.

NERVES: Another day of protests against parts of Trump’s agenda and challenges for some of his cabinet nominees who haven’t been confirmed by Congress made investors a bit more nervous. The VIX, an index known as Wall Street’s “fear gauge,” rose again after jumping Monday. It climbed 6 percent Tuesday to 12.64, which is up from 10 late last week but about the same as it was two weeks ago.

EASED OFF THE THROTTLE: Harley-Davidson said it shipped fewer motorcycles in the fourth quarter, and its profit and sales disappointed Wall Street. The company also said it expects shipments to be flat or down this year. The stock shed $1.94, or 3.3 percent, to $55.98.

DRUG RULING DINGS TEVA: Teva Pharmaceutical Industries slumped after a court ruled that four patents protecting its multiple sclerosis drug Copaxone are not valid. Teva said it will appeal the ruling, which could help competitor Mylan launch a lower-priced version of Teva’s best-selling product. Teva fell $1.11, or 3.2 percent, to $33.41; and Mylan gained 57 cents, or 1.6 percent, to $36.91.

POWER OF SCIENCE: Scientific instrument and lab supply company Thermo Fisher Scientific climbed $7.02, or 4.9 percent, to $150.31, after its net income and revenue in the fourth quarter beat of analyst estimates.

OVERSEAS: Stocks in Europe turned lower. Germany’s DAX lost 1.3 percent, and the CAC 40 of France fell 0.7 percent. The FTSE 100 index in Britain lost 0.3 percent. Japan’s benchmark Nikkei 225 dipped 1.7 percent after the Bank of Japan raised its growth estimates, which made the yen stronger. That hurts Japanese exporters, as it makes their goods more expensive in other markets. The South Korean Kospi lost 0.8 percent. Markets in Hong Kong, China and Taiwan were closed for Lunar New Year holidays.