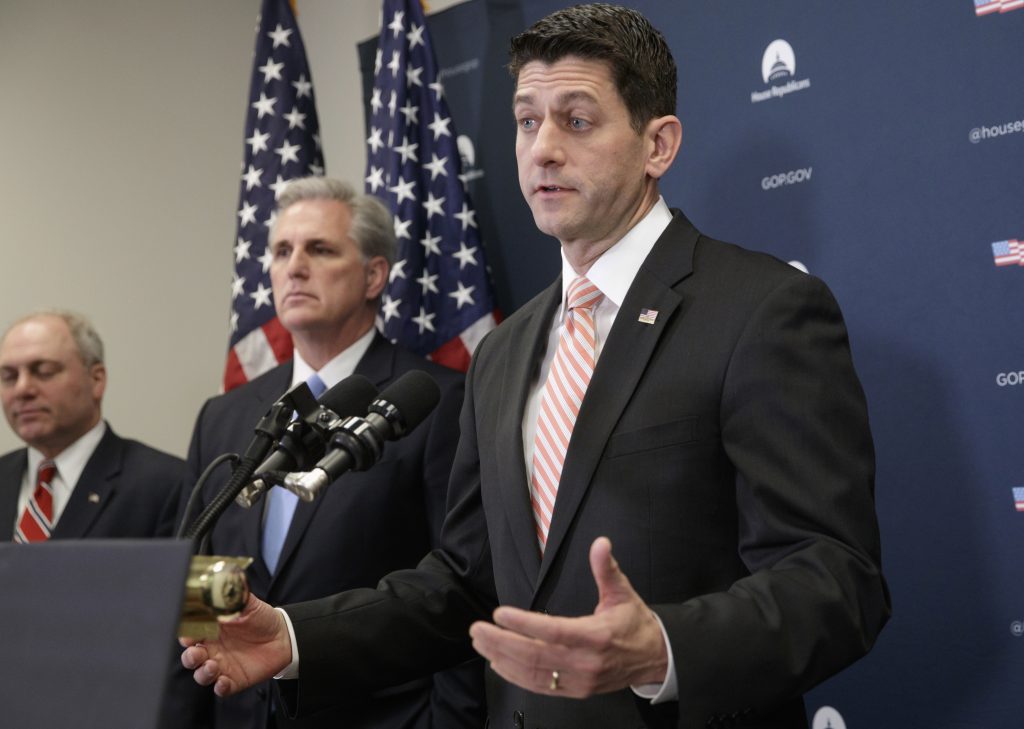 House Speaker Paul Ryan on Tuesday defended President Donald Trump’s divisive executive order on refugees and immigration, arguing that while the rollout was bumpy, the policy is consistent with Republican principles.

“The president has a responsibility to the security of this country,” Ryan told reporters. “What is happening is something that we support, which is, we need to pause. And we need to make sure the vetting standards are up to snuff so that we can guarantee the safety and security of our country. That is what this does.”

“I think it’s regrettable that there was some confusion on the rollout of this,” Ryan said, adding no one wanted to see legal permanent residents caught up in the immigration ban, which initially happened before the administration clarified that they should not be.

Even though GOP congressional leadership was frozen out of the drafting of the order, Ryan told rank-and-file Republicans in a closed-door meeting before speaking to reporters that he backed the decision to stop the U.S. refugee program and ban all entries from seven Muslim-majority nations for 90 days.

The action triggered mass confusion and chaos worldwide, split families and set off protests at airports across the country.

In the aftermath, Ryan told the GOP that the “rollout was a little bumpy, been a few potholes in the road but the actual policy he agreed with,” Rep. Phil Roe, R-Tenn., said.

Ryan warned lawmakers to expect protests at their offices, Roe said, but reminded them that the policy is in line with legislation the House has strongly backed in the past.

Another lawmaker, Rep. Dennis Ross of Florida, said the speaker’s message was, “‘Look, this shouldn’t be a surprise to anybody, this is what we all campaigned on … We’re looking at eight years of a legacy that we’re essentially undoing.’“

Said Rep. Chris Collins, R-N.Y.: “The speaker was very out in front today, reminding our conference this is something we should be embracing.”

Ryan’s reassurances weren’t enough to quiet frustration from some members.

“Basically, I think the thrust of the executive order should have been a very positive move,” said Rep. Pete King, R-N.Y. “The way it was handled, though, put the Republicans on defense, and also caused great inconvenience to too many people. But the political question you ask, yeah, they’re losing political capital for no reason. It was a self-inflicted wound.”

Top congressional leaders of Trump’s party, including Ryan, were left to find out the same way the general public did: from news reports as Trump signed the order on Friday.

“I guess one of you guys probably told me about it. Thank you for that,” Sen. Bob Corker, R-Tenn., who chairs the Foreign Relations Committee, told reporters Monday.

Then, as lawmakers struggled to gather details for constituents about the order, at least one prominent GOP senator was told that the State Department had been instructed not to communicate with Congress.

“There’s not a lot of answers as of today. In fact, my staff was told the State Department as of today was ordered not to talk to Congress about this issue,” said Sen. Marco Rubio of Florida. “That cannot be a permanent position; we expect answers here fairly soon.”

Next followed the surprising news, first reported by Politico, that the administration’s repeated claims that Hill Republicans were involved in drafting the executive order apparently referred to staffers on the House Judiciary Committee who acted without the knowledge of GOP leadership.

Each new revelation set off alarm bells on Capitol Hill. The failure to consult with lawmakers ahead of time on the immigration executive order set the stage for high-profile Republicans to criticize the measure once it started attracting widespread controversy, and so they did, despite leadership remaining generally supportive.

And the administration’s decision to make a major foreign policy move with no notice to Congress raised questions about how well the Trump White House will work with Capitol Hill to push through a massive legislative agenda that includes repealing and replacing Barack Obama’s health-care law, overhauling the tax code and building a border wall. Although many Republicans remained optimistic that the failures amounted to growing pains for the new administration, congressional relations under the Trump administration seemed to be off to a sour start.

“I think they understand, let me put it that way, that this was not handled in the most productive manner,” Corker said. “My guess is next time they attempt to do something that is far-reaching like this, there’ll be a lot more communication.”

Trump’s order pauses America’s entire refugee program and indefinitely bans all those from war-ravaged Syria. Federal judges in New York and several other states issued orders that temporarily block the government from deporting people with valid visas who arrived after Trump’s travel ban took effect. Trump fired the Justice Department’s acting attorney general Monday after she refused to defend the order in court, replacing her with someone who would.

Throughout the day Monday, as confusion continued at home and abroad over the scope and implementation of the order, White House officials led by press secretary Sean Spicer insisted that Hill Republicans were involved in drafting the order and were aware of it beforehand. Yet top aides to House GOP leaders repeatedly disputed that assertion, leaving it unclear what Spicer was talking about.

Finally late Monday, confirming some details of a report in Politico, the House Judiciary Committee said that some staff members had been “permitted” to lend their expertise on immigration to the Trump transition team. Yet leadership was not aware, and earlier in the day committee officials had said that the panel’s chairman, Rep. Bob Goodlatte of Virginia, was not consulted on drafting the executive order, so the staff effort appeared to take place behind the backs of top House Republicans.