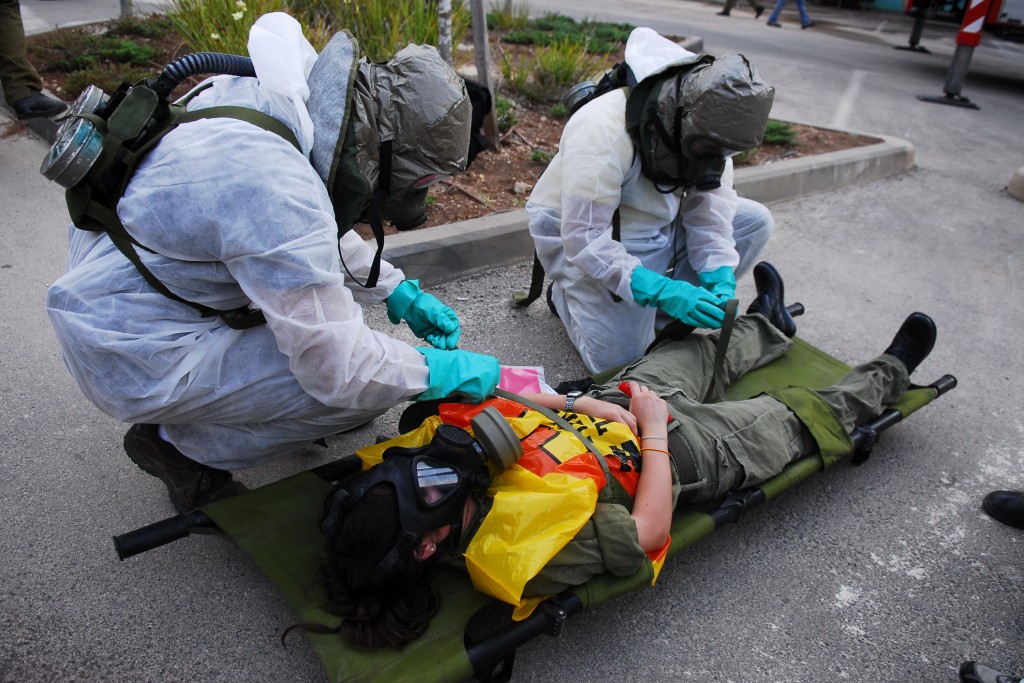 At a press conference Tuesday, Haifa Mayor Yonah Yahav said that a new report on the dangers posed by ammonia storage facilities in his city is “frightening. The way ammonia is imported and stored, including the ships it is transported in and the storage facilities it is kept in, constitute an immediate threat for a catastrophic incident that could, R”l, end in death and injury or damaged health to hundreds of thousands of Israelis.”

The report, which Yahav presented Tuesday, was authored at the request of the city by Professor Ehud Keinan of the Technion.

Haifa is home to a large ammonia storage facility, operated by Haifa Chemicals. In 2013, the Environment Ministry approved a plan to move it to a less-populated area of the Negev, because of fears that a leak or other incident could endanger the health and lives of the 800,000 residents of the region. The matter has been a cause célèbre for environmental groups for decades, who have organized many petitions, protests and marches over the years to move the facility.

Those fears, said Yahav, are very well founded, according to the report. To start with, ammonia is poisonous, and exposure to a concentration of even a small amount (as little as 5,000 parts per million, or a 0.5-percent concentration) could lead to death within minutes. “Israel needs no more than 3,000 tons of ammonia a year, and that is a small enough amount to store in small facilities” away from a heavily populated area like Haifa.

One of the chief fears of security officials is that terrorists, or Hezbollah missiles, could attack the storage facilities. Last year, Hezbollah chief terrorist Hassan Nasrallah said that the Haifa storage facilities were on Hezbollah’s target list. “It would have the same effect as an atomic bomb, according to the Israelis themselves,” Nasrallah told supporters. “They have 15,000 tons of ammonia there. If one of our missiles hit that site it would mean the death of tens of thousands — just like with a nuclear weapon.”

But an even more immediate issue is the fact that the storage facilities have been in Haifa Bay for decades — and professional groups recommend not storing ammonia in the same containers for more than 40 years. “As such, the storage facilities in Haifa are nearing the end of their life cycle,” said Yahav. “That means they could literally collapse within months. They must be shut down and moved immediately. We have studied other ammonia storage facility collapses around the world, and we have strong fears that the same thing could happen here,” he added.

Yet an even greater danger is one that few Israelis are even aware of: the ship that Haifa Chemicals uses to transport the ammonia to Haifa. “This is a subject that has never even been raised in the past,” said Yahav. “The possibility of a ship leaking ammonia into Haifa Bay is strong, and it could have a devastating environmental impact. Half of the leaking ammonia would dissolve in the sea, and the other half would evaporate into an ammonia cloud” that would move onshore, bringing death in its wake.

“A terror or rocket attack on the ship would create an explosion that would put 600,000 people in immediate danger of death,” Yahav added. “The party is over. For 13 years we have fought legal battles to move this facility, and have been met with cynicism and resistance. This ammonia issue must be resolved immediately.”

In a statement, Haifa Chemicals said that Yahav was “sowing panic and using a professional report cynically to rehash threats that have been dismissed by security officials. He also knows that Professor Keinan used 40-year-old data to compile his report, and this, of course, is no longer relevant. Yahav would do better to invest his time in repairing the city’s poor health and education systems and improving the city’s socio-economic level rather than cause provocations based on untruths.”