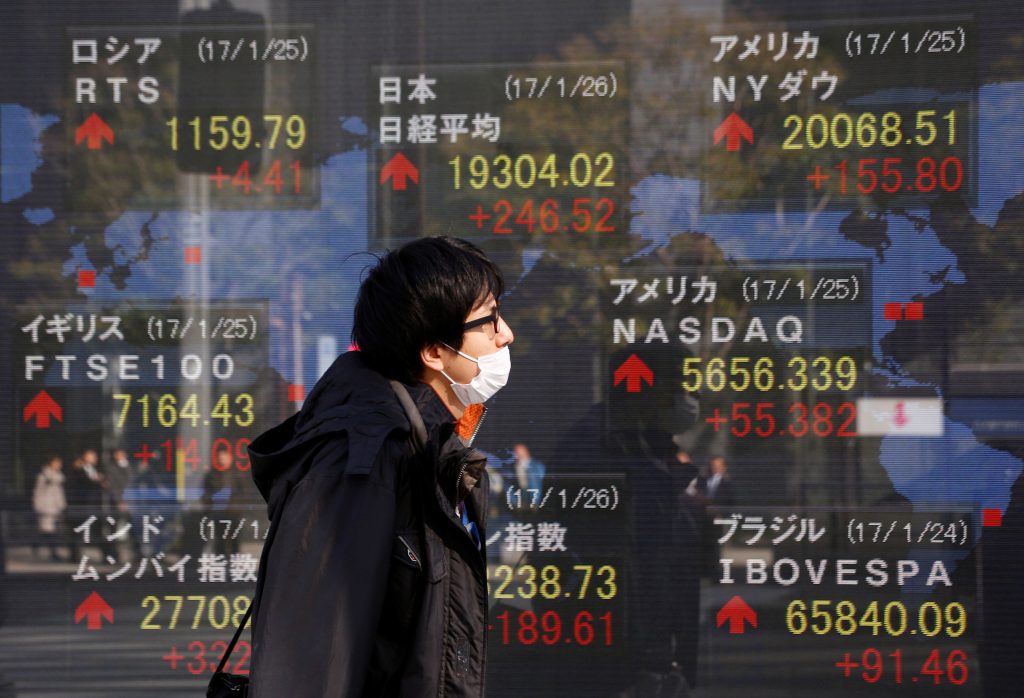 Asian shares slipped on Tuesday as stringent curbs on travel to the United States ordered by President Donald Trump brought home to investors that he is serious about carrying out his controversial campaign pledges.

European bourses are expected to remain fragile after big losses on Monday, with spread-betters seeing opening losses of as much as 0.1 percent in major indexes, including Britain’s FTSE, Germany’s DAX and France’s CAC.

“Investors are becoming worried as it appears as if he was setting fire to geopolitical risks that already exist,” said Yoshinori Shigemi, global market strategist at JPMorgan Asset Management.

Trump’s move drew criticism from some U.S. policymakers, and business leaders, with technology companies, which depend on talent from around the world, planning to discuss a legal challenge.

On Monday, the U.S. S&P 500 Index fell 0.6 percent, its biggest fall in a month, though it remained well above levels seen before the Nov. 8 presidential election.

MSCI’s gauge of the world’s 46 stock markets shed 0.6 percent, its largest loss in a month and a half.

The mood soured further when Trump fired the federal government’s top lawyer after she took the extraordinarily rare step of defying the White House.

U.S. stock futures shed 0.3 percent on Tuesday and the dollar extended losses against the yen.

Still, most share prices were up on the month, supported by signs of accelerating momentum in the global economy and hopes of large fiscal stimulus from Trump.

MSCI’s ex-Japan Asian shares index was up 5.7 percent this month while its index of world markets was up 2.5 percent. They were also higher than their levels before the U.S. elections.

In the currency market, the dollar was broadly weak and fell 0.3 percent against the yen to 113.49 yen. It was down 3.1 percent so far this month, after three straight months of sizable gains.

The Japanese currency showed no reaction after the Bank of Japan kept its policy on hold, as expected. A string of recent data has suggested the economy is slowly regaining traction.

In a possible sign of increased anxiety among investors, the safe-haven Swiss franc strengthened to a seven-month high of 1.0637 franc per euro on Monday.

Worries are also growing about a political shift to populist leaders in Europe.

French bond yields rose to the highest level since September 2015, on rising uncertainty over the Presidential election later this year. Conservative leader François Fillon, seen as the front-runner, is now battling to contain a scandal over allegedly unlawful payments to his wife, while the Socialists on Sunday picked a hard-left candidate, possibly helping popular far-right leader Marine Le Pen.

Italian assets have also been hit by worries over its banking sector after UniCredit, the country’s biggest bank, revealed on Monday it expects to book a net loss of around €11.8 billion ($12.6 billion) for 2016 and fall short of European Central Bank (ECB) capital requirements.

By contrast, the yield on German debt fell on Monday even as data showed inflation in Germany hit a 3½-year high in January.

News that Germany posted a national inflation rate of 1.9 percent stoked talk of an unwinding of monetary stimulus by the ECB, even though the inflation outcome was below expectations.

Elevated uncertainty about Trump’s policies, including a lack of detail so far on his plans for tax cuts and fiscal spending, offset optimism on the U.S. economy.

Data on Monday showed U.S. consumer spending accelerated in December while inflation showed some signs of picking up last month.

The core PCE price index, the Federal Reserve’s preferred inflation measure, rose 1.7 percent on a year-on-year basis after a similar gain in November.

“We’ve seen a jump in U.S. economic sentiment after Trump’s victory. But the improvement in hard economic data remains moderate,” said Haruka Kazama, senior economist at Mizuho Research Institute. “And if Trump takes more steps to limit permits for immigrants, that would surely boost inflation as the U.S. is now near a full employment,” she added.

The Federal Reserve, which will start its two-day policy meeting on Tuesday, is widely expected to keep interest rates unchanged as it awaits greater clarity on Trump’s economic policies.

Oil prices dipped as rising U.S. drilling activity offset efforts by OPEC and other producers to cut output in a move to prop up the market.

Brent crude futures, the international benchmark for oil prices, were trading at $55.14 per barrel, down 0.2 percent from Monday’s settlement price.