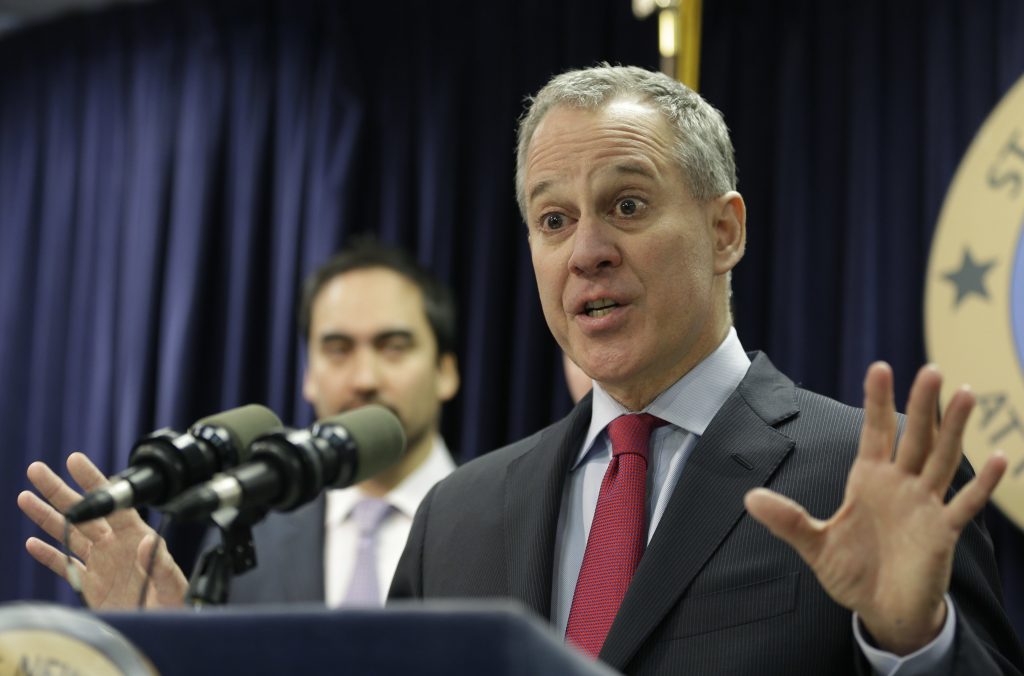 Washington, Massachusetts, Virginia and New York are becoming the first states to sue the Trump administration with filings announced this week over the executive order restricting refugees and immigration. They likely won’t be standing alone for long.

Since Donald Trump was elected president, Democratic state attorneys general have been forming a coordinated wall of legal resistance over immigration, environmental protections, health care, and other major issues.

New York Attorney General Eric Schneiderman told The Associated Press that lawyers, including attorneys general, are having an “awakening” regarding the Trump administration.

“This is a president who does not have respect for the rule of the law,” Schneiderman said. “That’s something that bothers a lot of people.”

On Tuesday, Schneiderman, and the attorneys general for Massachusetts and Virginia announced separately that their offices were joining legal challenges to Trump already filed in their states by advocacy groups such as the American Civil Liberties Union.

The state officials’ plan for legal pushback has precedent: Several Republican attorneys general made it a practice to routinely file lawsuits against the policies of former President Barack Obama.

Unlike groups taking up fights on behalf of individuals, attorneys general — the chief lawyers for state governments — can sue more broadly on behalf of their states. Most are elected and thus can act independently of their state legislatures or governors.

“It’s my responsibility as attorney general to defend the rule of law, to uphold the Constitution on behalf of the people of this state. And that’s what we’re doing,” Washington Attorney General Bob Ferguson said on Monday when announcing his lawsuit against Trump’s executive order.

He said that other states could join the lawsuit, which asks a judge to throw out key provisions of the order Trump issued on Friday to temporarily close the U.S. to all refugees and all people from seven majority-Muslim countries and bar Syrian refugees indefinitely.

Healey, who has held town hall meetings around Massachusetts on responding to Trump, called the policy “harmful, discriminatory and unconstitutional.”

The administration says such action is needed to protect the country from terrorist attacks. Since it was issued, the White House has said people from the banned countries who have permission to work in the U.S. can enter.

On Sunday, 17 Democratic attorneys general signed a letter vowing to “use all of the tools of our offices to fight this unconstitutional order.” Most of the signatories were from states controlled by Democrats and that Hillary Clinton won in November. But also signing were the Democratic attorneys general from Iowa and Pennsylvania, which voted for Trump, and Maine, where the electoral vote was split.

Attorneys general have taken smaller actions since Trump was elected, both on their own and in concert.

For example, some wrote Trump calling for him to keep former President Barack Obama’s clean power plan in place.

In January, a group of them asked a judge to let it intervene in a court case on the constitutionality of the federal Consumer Financial Protection Bureau. That motion could be a step toward the state officials defending the office in court. Trump said on Monday that he intends to do “a big number” on the bill that created the agency. Iowa Attorney General Tom Miller told the AP that protecting the office is a priority.

Some attorneys general banded together to urge the U.S. Senate to reject former Oklahoma Attorney General Scott Pruitt as administrator of the Environmental Protection Agency and Alabama Sen. Jeff Sessions to lead the U.S. Department of Justice.

One of the first steps T.J. Donovan took when he became attorney general in Vermont this month was forming a task force to advise him on immigration policies.

State attorneys general have a history of banding together. Most notably, a series of lawsuits from them led to the 1998 tobacco industry settlement under which cigarette makers agreed to pay states more than $200 billion over 25 years.

Republican attorneys general sued President Obama over his health insurance overhaul minutes after he signed it and over his rules to limit power plant emissions even before the details were final. In both cases, courts sided with them, at least in part. After Trump won the White House in November, taking on the president became part of the job description for their Democratic counterparts.

State attorneys general have become more active since the administration of former President George W. Bush, especially when it comes to federal laws and policies, said a scholar who studies the office.

“It’s become such an established part of what AG’s do on the national level,” said Paul Nolette, an assistant professor of political science at Marquette University. “It’s become much more AG’s going on the offensive.”