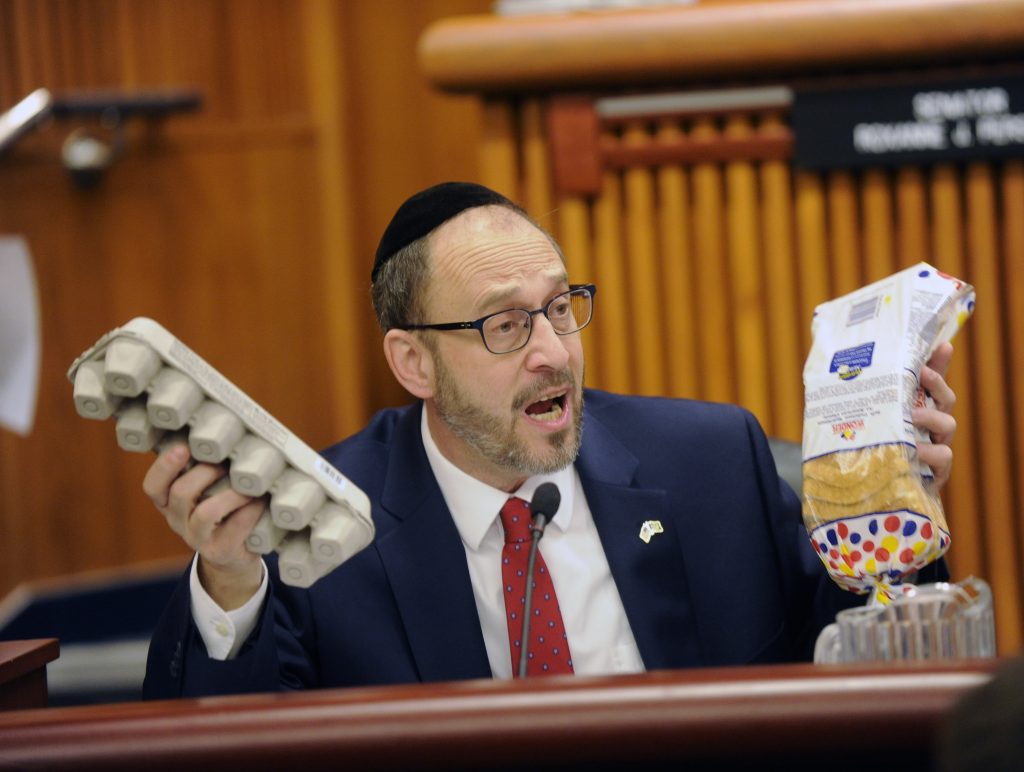 New York state lawmakers lashed out at Mayor Bill de Blasio Monday over New York City’s plan to impose a fee on plastic shopping bags, dismissing it as a burden on poor and middle-class residents already struggling to get by in an expensive city.

De Blasio was in Albany for a legislative hearing on the state budget Monday, an annual occurrence that has increasingly turned into an opportunity for state legislators to lambaste the mayor of the nation’s largest city.

This year, lawmakers quickly focused on the bag fee, set to take effect in the city next month. Democratic Sen. Simcha Felder of Brooklyn held aloft a carton of eggs and loaf of bread as examples of everyday items purchased by New Yorkers who are “overtaxed, overfined, overticketed,” he said.

“Do you know how much a pound of bread costs today?” he asked the Mayor. “Or a dozen eggs? I was in a local shop last week where I watched a mother put back sliced cheese because she didn’t have enough money for everything when she went to pay for her groceries.

“New Yorkers are tired of being insulted,” Felder said. “If government doesn’t have a way to fix something, it’s ‘no problem: tax!’”

Felder insisted that this wasn’t an argument over the environment but how the city reacts to problems.

“It’s about protecting the earth,” de Blasio said. “If we continue to use petroleum-based products when we don’t need them we are only exacerbating climate change.”

Consumers in the city will pay 5 cents or more for single-use plastic shopping bags starting next month. Store owners will keep the money from the fee, which is intended to encourage the use of reusable bags and decrease litter.

Legislation to stop New York City from imposing the fee has passed the state Senate and awaits action in the Assembly.

De Blasio’s legislative critics said the city should have expanded plastic bag recycling efforts or considered incentives for the use of reusable bags instead of the fee.

“There might be another way to do this … that will work for all New Yorkers,” said Assemblyman Michael Cusick, D-Staten Island. “People are exhausted by constant fees, by fares, by everything.”

Speaker Carl Heastie said lawmakers in his chamber haven’t decided whether they’ll support the legislation or offer an alternative.