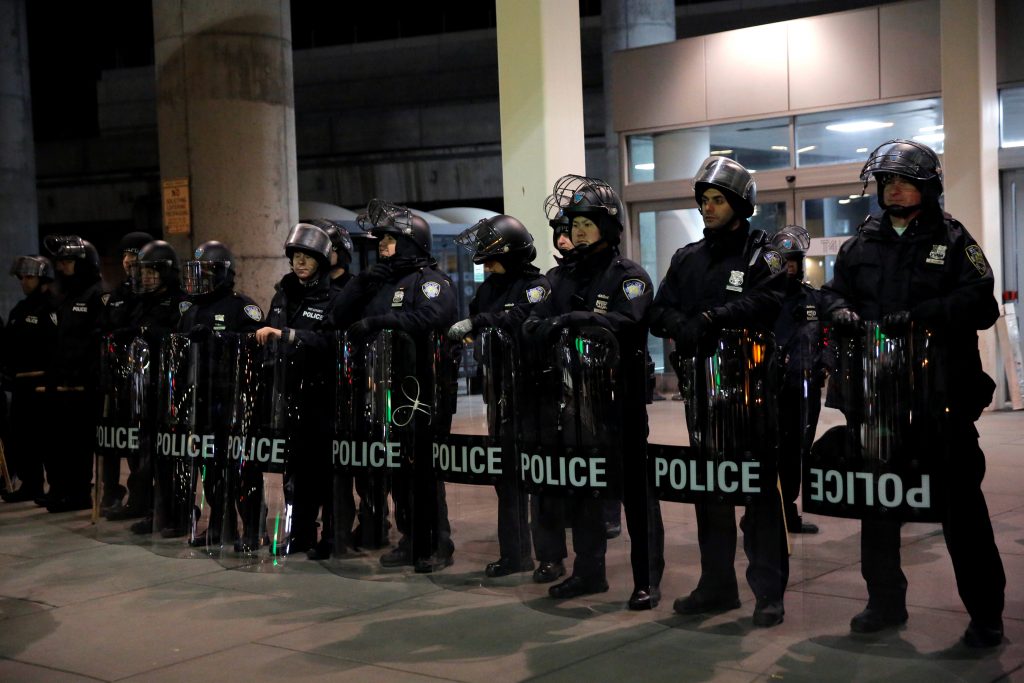 President Donald Trump on Monday denied his immigration order was to blame for the chaos at nation airports over the weekend, instead pointing to computer glitches, protesters and even the “tears of Senator Schumer.”

“There is nothing nice about searching for terrorists before they can enter the country,” Trump wrote in a series of early morning tweets. “This was a big part of my campaign. Study the world!”

Trump enters his second week in office amid a global backlash to his policies. EU officials denounced U.S. policy as a dangerous embrace of isolationism and inequality, while the international aid group Doctors Without Borders accused Trump of keeping people “trapped in war zones, directly endangering their lives.”

In Iraq, two lawmakers there said the Iraqi parliament has approved a “reciprocity measure” restricting the entry of Americans into Iraq.

The president tweeted early Monday that only 109 out of 325,000 people “were detained and held for questioning” following his executive order to bar individuals from seven Muslim-majority countries.

“Big problems at airports were caused by Delta computer outage, protesters and the tears of Senator Schumer,” he added.

Trump was referring to a Delta systems outage Sunday night that led to departure delays and cancellations of at least 150 Delta flights.

Democratic Sen. Chuck Schumer tweeted Friday that “Tears are running down the cheeks of the Statue of Liberty” over the ban.

Trump has defended his order by saying it’s not a “Muslim ban.”

In a background call with reporters Sunday, a senior administration official declared the order’s implementation “a massive success story,” claiming it had been done “seamlessly and with extraordinary professionalism.”

Homeland Security Secretary John Kelly issued a statement Sunday saying that, absent information indicating a serious threat to public safety and welfare, residency would be a “dispositive factor in our case-by-case determination.” That means citizens of the seven countries who hold permanent U.S. residency “green cards” will not be barred from re-entering the U.S., as officials had previously said. It remains unclear what kind of additional screening they will now face.

White House press secretary Sean Spicer on Monday morning defended the closed-mouth discussions that preceded Friday’s announcement, saying that “I think there are some people who might not like the way it was done, but they were all consulted in the process.”

Interviewed on MSNBC, Spicer said officials put the safety of the American people first and said officials didn’t want to “telegraph” what they were going to do. He acknowledged “the secret way we had to roll this out” and said that it was because of “security reasons.”

A federal judge in New York has issued an emergency order temporarily barring the U.S. from deporting people from the seven majority Muslim nations subject to Trump’s 90-day travel ban.

The order barred U.S. border agents from removing anyone who arrived in the U.S. with a valid visa from Iraq, Syria, Iran, Sudan, Libya, Somalia and Yemen. It also covered anyone with an approved refugee application.

The Department of Homeland Security said Sunday the court ruling would not affect the overall implementation of the White House order.

Several Democrats in Congress said they would be introducing legislation to stop the ban.