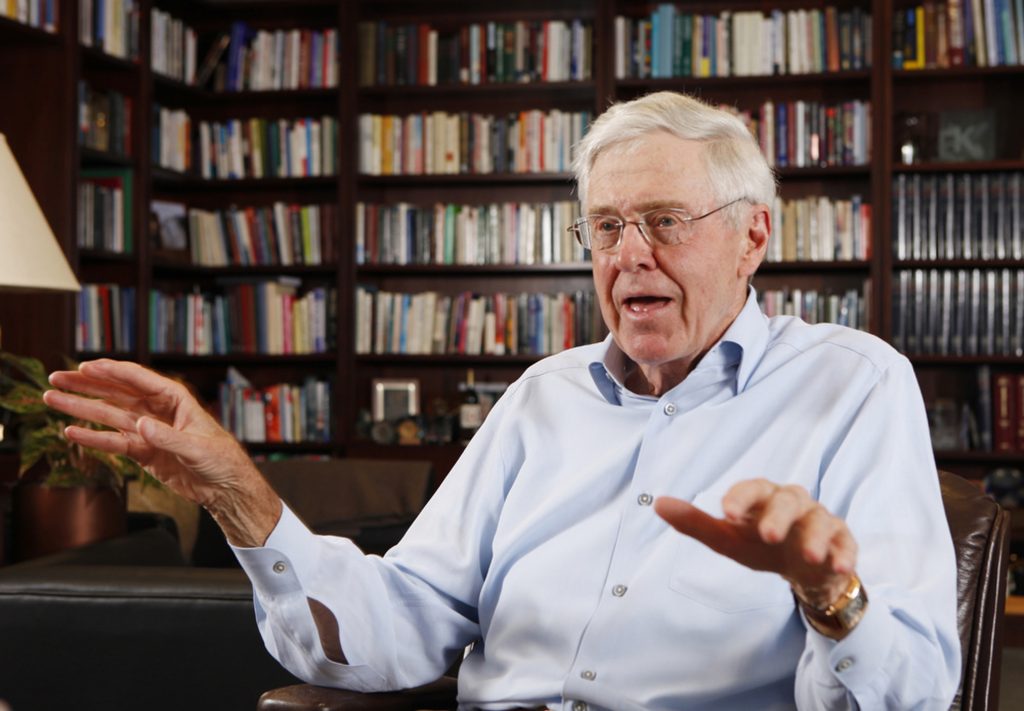 Prominent Libertarian donor Charles Koch (pronounced “Coke”) and his vast network is vowing to oppose President Donald Trump if and when he deviates from their dedication to “free and open societies.”

This weekend alone, Koch raised concerns about whether the Republican president will adopt an “authoritarian” governing style. Koch’s chief lieutenants condemned the nascent administration’s plans to invest hundreds of billions of dollars in infrastructure projects. And the Koch network’s many donors lashed out at Trump’s push to block immigration from several Muslim-majority countries.

“It doesn’t do any good for us to be positioned as hating whole classes of people,” said Erick Brimen, who, like the other 550 or so donors who gathered at a luxury California hotel this weekend, will pay at least $100,000 this year to fund Charles and David Koch’s nationwide network of policy and political organizations.

“What has made America great always is that this has been a place that has welcomed the best and the brightest,” said Brimen, a Venezuelan native who became a U.S. citizen last year and now manages a private equity firm. “The message needs to be very loud and clear that we continue to be such a place no matter where you come from.”

The sentiment was in line with a formal statement released Sunday by the Koch network, which said Trump’s “travel ban is the wrong approach and will likely be counterproductive.”

The pointed criticism comes as the people who help fund what may be the nation’s most powerful right-wing network grapple with mixed feelings about the new administration. The Kochs refused to support Trump’s candidacy last fall, but they now see a once-in-a-lifetime opportunity to influence the White House and the Republican-controlled Congress.

Many who attended this weekend’s Koch donor conference reported anxious optimism about the extraordinary opportunity for Republicans. They highlighted strong ties between the Koch network and the Trump administration. And even before it is announced, Koch’s team is preparing to devote its tremendous resources to defend Trump’s pick for the Supreme Court.

Yet there are also deep concerns about a new president with no long-term commitment to right-wing priorities like free trade, free markets and small government.

“Our suspicion is we’re going to get three parts good and one part bad,” said Chris Wright, a Colorado-based energy entrepreneur. “We’re worried about the one part bad.”

And over and over again this weekend, Koch’s lieutenants insisted they were willing and able to take on the Trump administration and any members of Congress who stand in their way.

Without naming Trump, Koch network co-chair Brian Hooks noted that Republicans opposed President Barack Obama’s stimulus and should do the same if the new president follows through on his pledge to support a massive infrastructure package. Others promised to fight what they called “crony capitalism” in the new administration, reminding Republicans that they fought Obama’s support for private companies like Solyndra and should do the same when Trump picks winners and losers in private business.

Hooks and others also repeatedly raised pointed objections to Republican plans to adopt a “border adjustment” tax or new tariffs.

“We’re going to have the courage to oppose bad policies … regardless of who proposes them,” Hooks declared.

Koch himself raised a broader concern about the new administration’s use of executive authority. The billionaire industrialist did not mention Trump by name as he warned that the nation is facing a moment of “tremendous danger.” He said the nation could “go the authoritarian route … or we can move toward a free and open society. So this is our opportunity.”

There is perhaps no bigger Koch ally than Vice President Mike Pence, whose staff and ideology has been in close alignment with the Kochs for years.

Koch spoke directly with the vice president on the phone days before his inauguration as Pence considered hiring a Koch communications staffer, Stephen Ford, to serve as his chief speechwriter. Ford was soon hired, along with former Koch chief Marc Short, who now serves as the White House legislative director.

“The reason we’re optimistic … is really Mike Pence,” said Doug Deason, a prominent Trump supporter and major Koch donor. “If you think Cheney had power in the Bush White House, just watch and see what happens with Mike Pence.”

Meanwhile, Koch donor Fred Klipsch, of Indiana, suggested the tension between Trump and Koch is exaggerated.

“These are two strong-willed individuals and they’ve had their disagreements,” Klipsch said. “On the other hand, when it comes time to get to work, I think they’re all working in the same direction.”