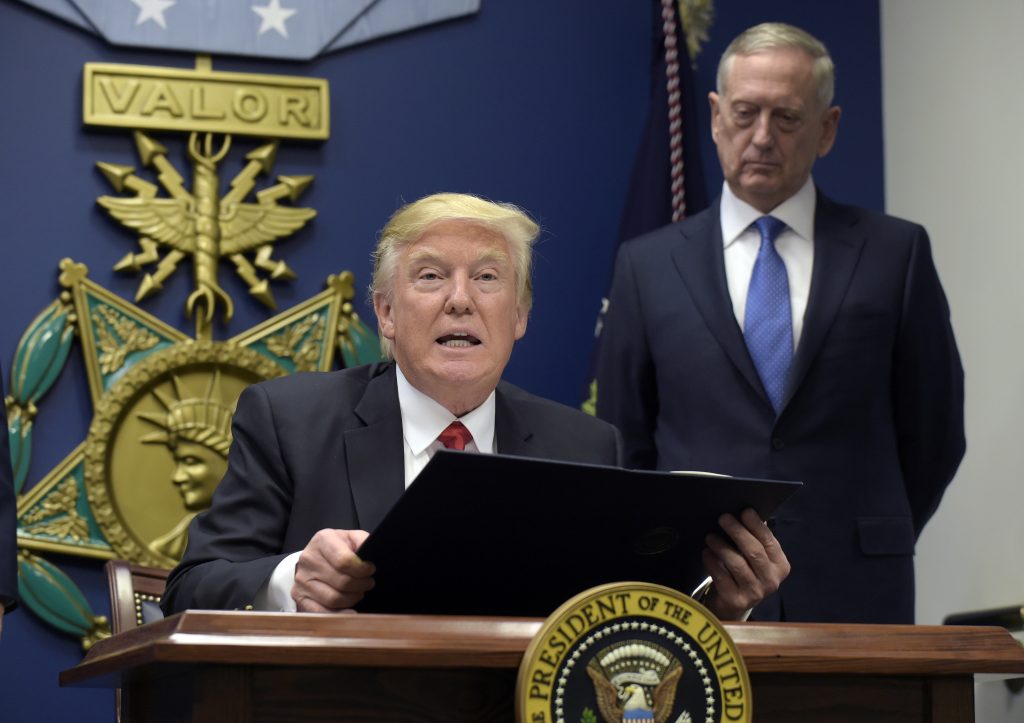 President Donald Trump on Friday barred all refugees from entering the United States for four months — and those from war-ravaged Syria indefinitely — declaring the ban necessary to prevent “radical Islamic terrorists” from entering the nation.

The order immediately suspended a program that last year resettled to the U.S. roughly 85,000 people displaced by war, political oppression, hunger and religious prejudice. Trump indefinitely blocked all those fleeing Syria, where a civil war has displaced millions of people, and imposed a 90-day ban on entry to the U.S. from seven Muslim-majority nations.

“We want to ensure that we are not admitting into our country the very threats our soldiers are fighting overseas,” Trump said as he signed the order at the Pentagon. “We only want to admit those into our country who will support our country and love deeply our people.”

Trump said the halt in the refugee program was necessary to give government agencies time to develop a stricter vetting system. But the order did spell out what additional steps he wants the Homeland Security and State departments to take.

The U.S. may admit refugees on a case-by-case basis during the freeze, and the government will continue to process requests from people claiming religious persecution, “provided that the religion of the individual is a minority religion in the individual’s country.”

In an interview with CBN News, Trump said persecuted Christians would be given priority in applying for refugee status.

“We are going to help them,” Trump said. “They’ve been horribly treated.”

The order was signed on Trump’s most robust day of national security and foreign policy at the start of his presidency, marked by a meeting with British Prime Minister Theresa May and a lengthy phone call with Mexican President Enrique Pena Nieto.

As a candidate, Trump called for a temporary ban on all Muslim immigration to the U.S. He later shifted his focus to putting in place “extreme vetting” procedures to screen people coming to the U.S. from countries with terrorism ties.

The State Department said the three-month ban in the directive applied to Iraq, Syria, Iran, Sudan, Libya, Somalia and Yemen — all Muslim-majority nations.

The Council on American-Islamic Relations, or CAIR, said it would file a federal lawsuit Monday challenging the constitutionality of the executive order.

“There is no evidence that refugees — the most thoroughly vetted of all people entering our nation — are a threat to national security,” said CAIR National Litigation Director Lena F. Masri. “This is an order that is based on bigotry, not reality.”

During the past budget year, the U.S. accepted 84,995 refugees, including 12,587 people from Syria. President Barack Obama had set the refugee limit for this budget year at 110,000.

Trump, according to the executive order, plans to cut that to 50,000. Refugee processing was suspended in the immediate aftermath of the Sept. 11 attacks and restarted months later.

The president was applauded by House Speaker Paul Ryan, who said it was “time to re-evaluate and strengthen the visa-vetting process.”

The order makes no mention of a plan to provide safe zones in Syria and the surrounding area. A draft of the order had directed the Pentagon and the State Department to produce a plan for safe zones in the war-torn Mideast nation.

The president’s directive capped a hectic first week for Trump at the White House. Earlier Friday, he hosted British Prime Minister Theresa May at the White House for his first meeting with a world leader since taking office.

Trump held firm Friday on another controversy — trade and illegal immigration from Mexico. He told reporters he had a “very good call” with Pena Nieto earlier in the day, but he reaffirmed his belief that Mexico has “outnegotiated and beat us to a pulp” on trade — and that would change.

“We’re no longer going to be the country that doesn’t know what it’s doing,” he declared a day after the Mexican leader canceled his visit to Washington in response to Trump’s plans to build a border wall and have Mexico pay for it.