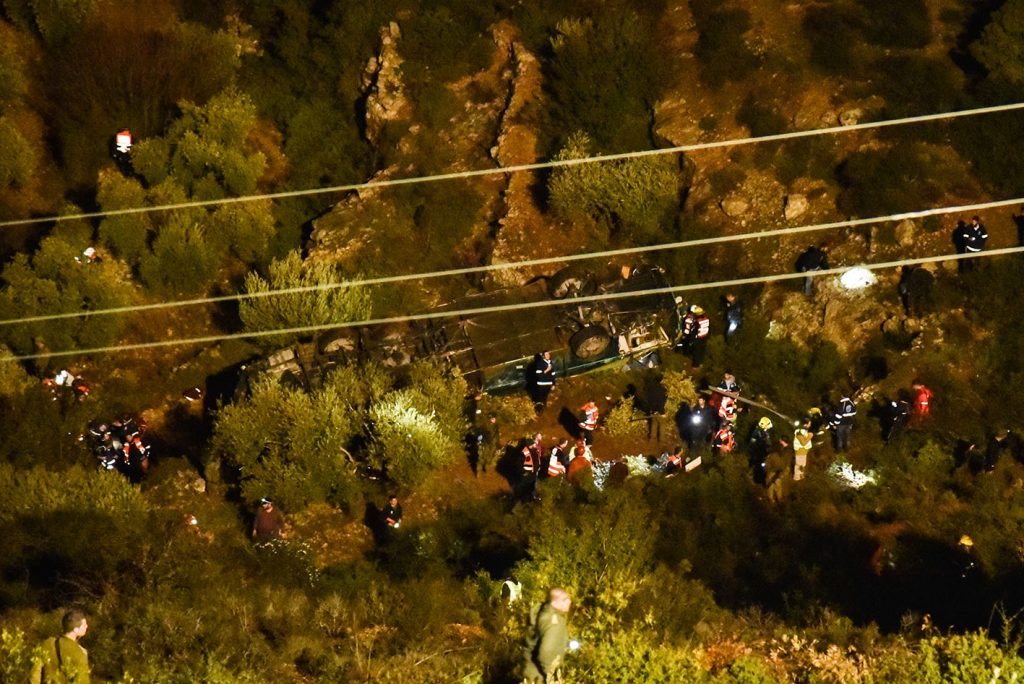 Police and rescue workers completed their work at the scene of a tragic road accident that took place in the Shomron region early Friday. Two people were killed and seven were injured when an Egged bus veered off the side of a road and plunged 230 feet into a wadi. The accident took place on Road 60, near Maale Levona.

One of those killed in the accident was the driver, Avishai Caravani, z”l, a 37-year-old resident of Ariel. Caravani was driving Egged’s bus 462 between Yerushalayim and Ariel. Investigators said Friday that it was not yet clear why Caravani lost control of the wheel. Eliyahu Shviro, the Mayor of Ariel, said he knew Caravani personally, and that he was “a dedicated husband and father, a shining example of a family man who contributed to his community with enthusiasm.” He was also a very experienced and safe driver, the mayor added.

Four were seriously injured; two were in a moderate condition and one person was lightly hurt.

Rescue workers declared the crash a “mass casualty event,” and dozens of ambulances, volunteers and medics were called in from across the region. MDA spokesman Zaki Heller said the rescue was hampered by the darkness, difficult terrain and stormy weather. IDF helicopters had to be used to lift the injured out of the ravine.

The weather Thursday night was wet and wild, with heavy rains and gusting winds – and officials pleaded with drivers to be extra careful over the weekend, when more wet weather is expected. In addition, drivers face a new challenge – ice – that is likely to form over the weekend, as temperatures dip to near freezing in the north and central hills.

High winds and large amounts of precipitation are expected through at least Sunday, and the extremely low temperatures mean that some of that precipitation – on hills 700 meters or higher – is very likely to be snow. In other areas, ice is likely to form. Snow may be possible in Yerushalayim, but forecasters do not expect it to accumulate.