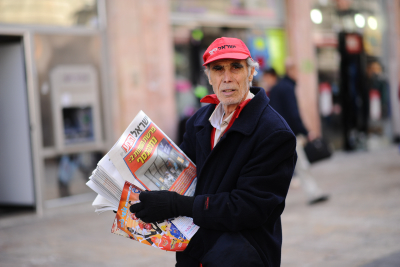 Is the reduction in the number of copies of the Yisrael Hayom in its daily and Friday edition a sign that the days of the newspaper are numbered – or that it is turning cold to Prime Minister Binyamin Netanyahu, support for whom is the perceived reason among many for its existence altogether? The newspaper isn’t talking, but the fact is that daily circulation has gone down by 50,000 copies in recent weeks, indicating that its patron, Sheldon Adelson, is supplying it with less money.

It’s no secret that Yisrael Hayom, the free daily newspaper that has become Israel’s favorite, receives its funding from American billionaire Adelson. Over the years, the paper has “lost” about a billion shekels, according to figures from Haaretz­ – and it has been Adelson who has been on the hook for most of that money. Nevertheless, over the years, circulation of the newspaper has only grown, reaching 325,000 copies daily and 550,000 on Friday.

However, the newspaper is clearly going through some changes. Daily circulation is off by 50,000, figures supplied by the newspaper show, and Yisrael Hayom has stopped listing the number of copies distributed in its Friday edition, a custom that had been in existence until the end of 2016. That is an indication, said Haaretz, that the number of weekend copies had also gone down. Yisrael Hayom had no comment on the matter.

According to business daily TheMarker (which is owned by Haaretz), the changes reflect a falling out between Netanyahu and Adelson, among other reasons. It’s not clear what the cause of that falling out is, but the involvement of Netanyahu in the “pay for play” scandal, in which Yediot Acharonot publisher Arnon Mozes promised Netanyahu better editorial treatment if he would somehow reduce the impact of Yisrael Hayom may be playing a role, TheMarker speculated. Any reduction in the number of copies of Yisrael Hayom printed is linked directly to the amount of money Adelson was supplying the newspaper with, said The Marker. Yisrael Hayom had no comment on this either.

Yisrael Hayom is the only daily newspaper that clearly supports Netanyahu, and has been accused of being a “shill” for the Prime Minister, with the paper funded by Adelson simply as a way to give Netanyahu a sounding board that will allow him to be heard in a manner that he chooses, untarnished by the negative coverage in most other Israeli media outlets.