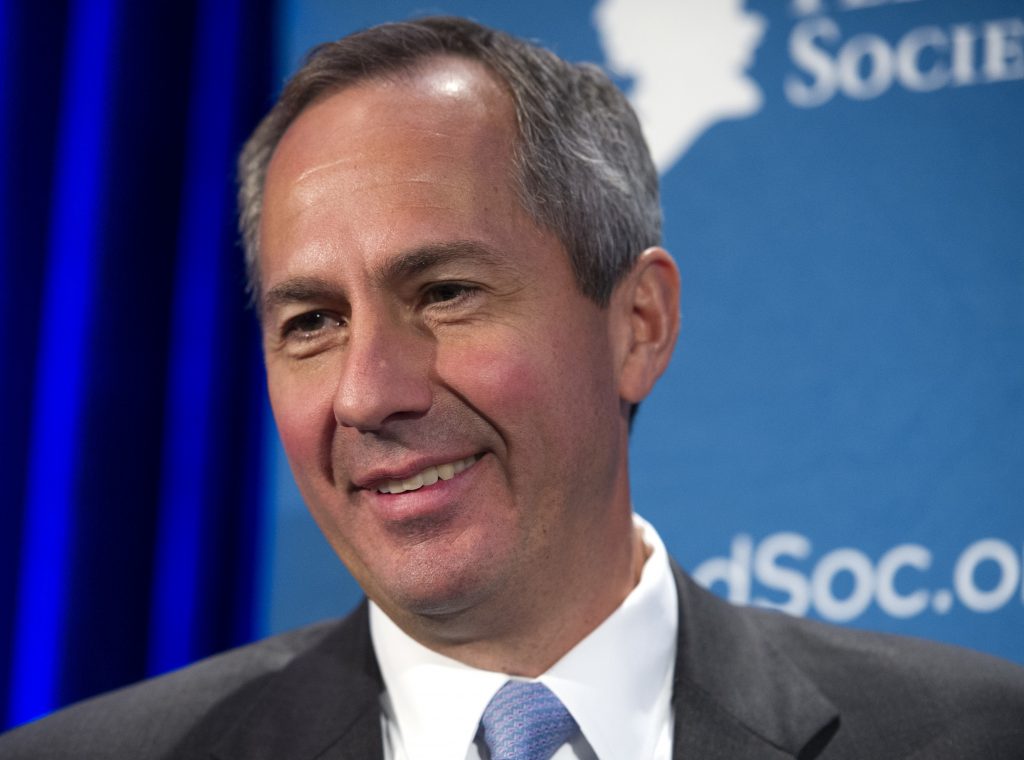 Federal appellate judges Thomas Hardiman and Neil Gorsuch have emerged as the two front-runners as Donald Trump prepares to make his first U.S. Supreme Court nomination next week, according to a person familiar with the selection process.

Hardiman and Gorsuch have both met with Trump, as has William Pryor, another appellate judge who remains in contention, the person said. A fourth possibility is federal appeals court judge Raymond Kethledge, the person said.

Hardiman, 51, or Gorsuch, 49, would probably offer an easier route to confirmation than Pryor, whose name Trump invoked on the campaign trail as a possible nominee. Gorsuch was confirmed by a voice vote and Hardiman on a 95-0 vote in the Senate when nominated to their current posts by President George W. Bush.

Either Hardiman or Gorsuch would, in all likelihood, largely track the voting pattern of the late Antonin Scalia, the justice whose seat Trump is looking to fill. The new justice could provide an outspoken voice for the court’s conservative wing for a generation.

Trump said Wednesday on Twitter that he would “be making my Supreme Court pick on Thursday of next week,” Feb. 2. Republicans say an announcement next week will provide time for confirmation before the Senate recess scheduled to start April 8, and potentially let the new justice hear cases during the high court’s current nine-month term.

Hardiman works out of Pittsburgh and once drove a taxi to help support himself. He got his law degree from Georgetown University and would become the court’s only justice who didn’t graduate from an Ivy League law school.

He has been a supporter of gun rights and police powers in his decade on the Philadelphia-based 3rd U.S. Circuit Court of Appeals. He voted to strike down a New Jersey law requiring people to show a “justifiable need” to get a permit for carrying a handgun in public. Hardiman said that the Second Amendment “right to bear arms” extends outside the home — an issue the Supreme Court hasn’t yet considered.

Hardiman wrote an opinion upholding the constitutionality of a jail’s policy of strip-searching all people who have been arrested.

Gorsuch, who sits on the 10th Circuit in Denver, is a former law clerk to Justice Anthony Kennedy, the Supreme Court’s current swing vote. Gorsuch offers a sparkling resume, with a law degree from Harvard and doctoral degree in legal philosophy from Oxford, where he studied as a Marshall scholar. CBS News was the first to report that Gorsuch was a frontrunner for the position.

As an appeals court judge since 2006, Gorsuch has championed religious liberty and criticized the Supreme Court ruling that requires judges to defer to administrative agencies on the scope of federal statutes. He has a reputation as a stellar writer.

Gorsuch is the son of Anne Gorsuch Burford, who led an effort to roll back the Environmental Protection Agency’s anti-pollution efforts when she served as its administrator under President Ronald Reagan.

Senate leaders from both parties met with Trump on Tuesday to discuss the vacancy. Dianne Feinstein of California, the top Democrat on the Senate Judiciary Committee, said that no names were discussed during the meeting. Senate Democratic leader Chuck Schumer said that Democrats will fight any choice they view as being outside the mainstream.

“I believe the president should pick a mainstream nominee who could earn bipartisan support for the vacant Supreme Court seat,” Schumer said. “I reiterated that view in our meeting today.”

Democrats are still smarting from Senate Republicans’ refusal to consider former President Barack Obama’s nomination of Judge Merrick Garland in March 2016 to succeed Scalia, who died the previous month. That nomination would have given the court a majority of Democratic appointees for the first time since 1969.

Democrats have the power to block a Supreme Court nominee because while Republicans control the chamber 52-48, a longstanding rule requires 60 votes to advance a pick for the high court.

Senate Majority Leader Mitch McConnell said on Tuesday that Trump should be able to get his choice confirmed without needing 60 votes to do so. Republicans have refused to say whether they would change the rule to let a high court justice be confirmed with a simple majority — an action known as the “nuclear option.”

“I anticipate a really well-qualified nominee,” McConnell, a Kentucky Republican, said before the Tuesday meeting.

Trump released a list of 21 prospective justices during the campaign and said he would make his Supreme Court choices from that group. The original list featured some less-traditional candidates, including state supreme court justices and a judge on a military appeals court.

Senate Democrats blocked the appellate-court nomination of Pryor, 54, for more than two years starting in 2003. An Alabama native who sits on the Atlanta-based 11th Circuit, Pryor is a onetime protégé of Sen. Jeff Sessions, Trump’s nominee to become attorney general.

Kethledge, 50, has won fans among conservatives for his pointed opinions. In 2014, The Wall Street Journal’s editorial page credited him with the “opinion of the year” for a “hilariously caustic rebuke” of the Equal Employment Opportunity Commission in a racial-bias case.

Last year, Kethledge ruled in favor of tea party groups that said they were singled out for mistreatment by the Internal Revenue Service. He sits on the Cincinnati-based 6th Circuit, working out of Ann Arbor, Michigan.

Kethledge is a graduate of the University of Michigan Law School and, like Gorsuch, a former law clerk to Kennedy. He took his appeals court seat in 2008, after his nomination was stalled by Michigan’s two Democratic senators for almost two years.