National FOCUS: Under Trump, It’s Make a Deal With the President — or Else
National 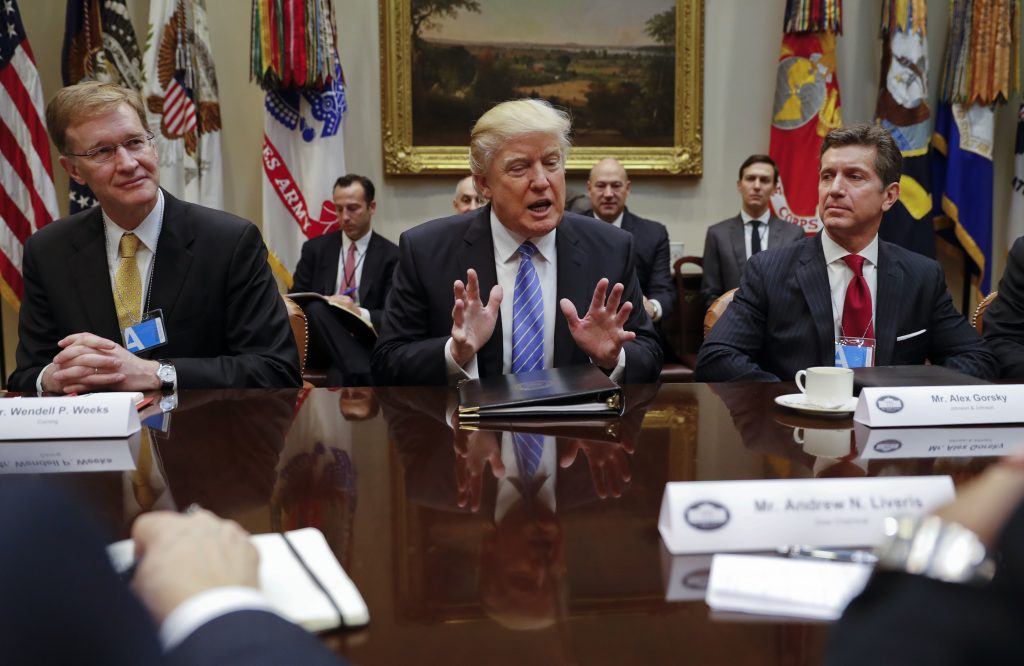 In the opening days of his presidency, Donald Trump has leaned heavily on what he believes is his strongest skill, and the secret to his success in both business and politics: negotiation.

People come in, he offers them a deal — and an “or else.”

He told the CEOs of major manufacturers they can look forward to lower taxes on products made in America. But if they move operations abroad, they’ll be slapped with a 35 percent border tax. He summoned U.S. automakers to make the same proposal, and dangled easier pollution rules as a sweetener. He offered to revive the Keystone and Dakota Access pipelines, with a catch: The pipes have to be made with U.S. steel.

It’s too soon to tell whether Trump will back up the threats and promises, or even whether he can. But the effort, aides say, is at the heart of the administration’s push to spur a rebirth of American manufacturing. In the coming weeks, he’s likely to employ the same tactic with other industries reliant on the federal government, pushing pharmaceutical companies to lower prices and defense contractors to reduce project bids.

Trump, whose Cabinet is not fully in place, is relying on his improvisational instincts. The executive action Tuesday requiring pipelines be made with U.S.-manufactured pipes emerged from an idea union leaders floated in a meeting with the president the afternoon before. Trump looked to an aide and declared, “I want to do this tomorrow.”

His advisers scrambled to consult steel companies and legal counsel to draw up the order and satisfy an adamant president. “Do whatever it takes,” he told them, according to a person familiar with the exchange.

It’s a small irony that Democrats attempted in January 2015 to attach a U.S. steel requirement to Republican legislation that would have fast-tracked Keystone XL. Senate Republicans blocked the amendment.

Trump has honed his particular style over decades as a real estate developer in New York, but transactional politics has a long history in America, even if it is not often so openly practiced in the White House. It was the grease that lubricated Richard J. Daley’s Chicago and Sam Rayburn’s House of Representatives, along with countless state and local governments over the years.

And while Trump is taking the idea of president-as-personal-power-broker to new heights, he is hardly the first to centralize power inside the White House at the expense of Cabinet policymakers. Both of his predecessors, Barack Obama and George W. Bush, had little use for Cabinet input, especially later in their terms, vesting power in close allies who served as White House domestic and national security advisers.

Critics from conservative populist Sarah Palin to liberal intellectual Larry Summers, a former treasury secretary, warn that the idea of a president picking winners and losers among businesses based on whether they bend to his will undermines the rules-based free-market capitalism fundamental to U.S. economic dynamism.

After Trump used a similar strategy of threats and rewards to persuade United Technologies Corp.’s Carrier unit to scale back a plan to shift jobs from Indianapolis to Mexico, Summers wrote in an op-ed for the Washington Post that the move was redolent of Vladimir Putin’s Russia and an approach that would render the country “not only poorer but less free.”

Palin said in a post on the website Young Conservatives that Trump was practicing “crony capitalism” that “amputated” the market’s “invisible hand.”

In a meeting Tuesday with the chief executives of Ford Motor Co, Fiat Chrysler, and General Motors, Trump offered to reduce environmental standards, regulations, and taxes if they aid in his mission to bring manufacturing back to the U.S. But the new president has warned manufacturers’ attempts to move jobs and plants overseas in search of cheaper labor will be met with onerous tariffs.

“If that happens, we are going to be imposing a very major border tax on the products when it comes in,” Trump said in a meeting with other manufacturing leaders on Monday.

Trump also issued memos on Tuesday offering hope for a pair of stalled construction projects: the Keystone XL and Dakota Access pipelines. Trump stipulated the move was “subject to terms and conditions to be negotiated by us.” He signed a third executive memorandum declaring that pipelines constructed in the U.S. must use American steel.

The question is whether Trump’s inclination toward deal-making will produce results.

On Capitol Hill, Democrats are looking to make deals of their own. They’ve said they’re willing to work with him on an infrastructure bill — as long as the spending comes in the form of government projects, and not simply tax breaks for private construction.

Republicans have said they support Trump’s push for corporate tax reform — a key promise in his meetings with business leaders. But disagreement between Trump and House Speaker Paul Ryan, a Wisconsin Republican, over the border adjustment tax has already spilled out into public. And Trump’s pledges to cut tax rates by double-digit percentages are sure to face fierce opposition from some lawmakers.

Companies so far seem willing to grant the new president some concessions. Ford canceled a $1.6 billion assembly plant in Mexico and has said it will spend $700 million to expand a Michigan factory instead. GM and Fiat Chrysler have each pledged to invest $1 billion in domestic assembly.

Both companies said those plans preceded Trump’s election, and all three will continue to produce vehicles in Mexico.

Yet Trump is already declaring success.

With assistance from Jennifer Jacobs and Margaret Talev