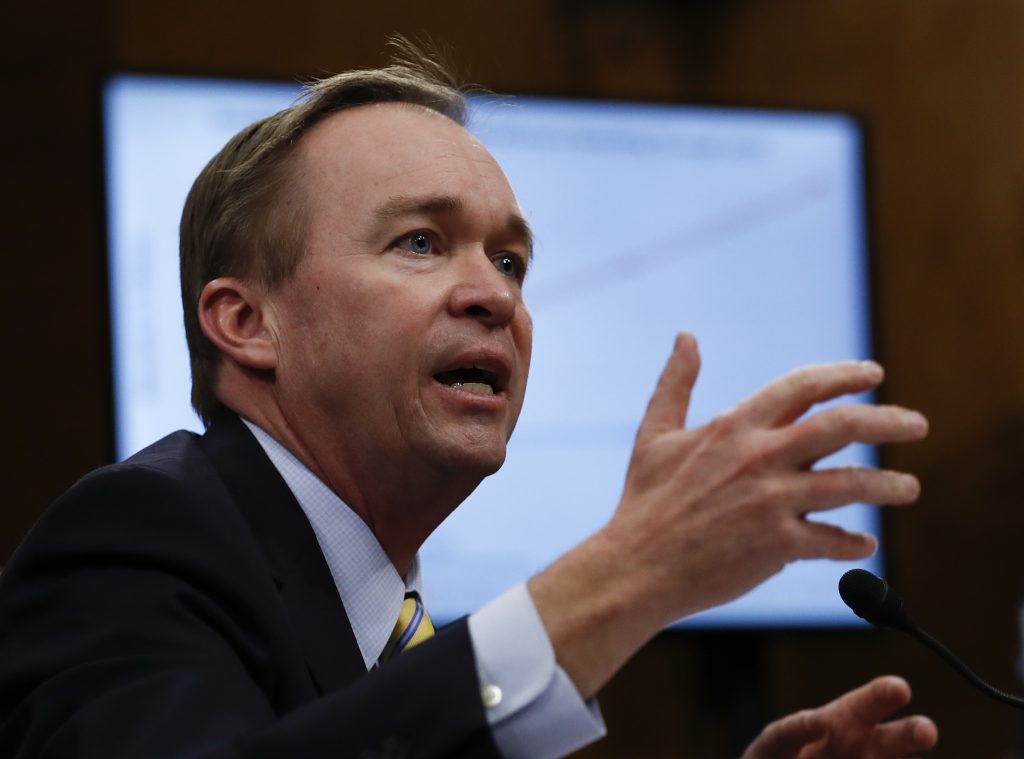 Mulvaney’s comments at his Senate confirmation hearing stand in sharp contrast to Trump’s campaign pledges not to cut the programs. Trump has also pledged to cut taxes, not raise them.

Mulvaney, a South Carolina Republican, said he would not propose cutting Social Security or Medicare benefits for people already receiving them. “I’m not making my parents go back to work,” Mulvaney said. But, he added, younger workers should expect to work longer than their parents did. He also said Medicare should be means-tested, which means benefits would be limited for wealthy retirees. They already pay higher premiums.

“I think folks on Social Security and Medicare ought to be really worried,” said Sen. Debbie Stabenow, D-Mich. “The alarm bells should be going off right now.”

Sen. Bernie Sanders, an independent from Vermont, read quotes from Trump during the campaign saying he would not cut the benefit programs. Yet, as a member of Congress, Mulvaney has been outspoken on changing the programs.

“The only thing I know to do is to tell the president the truth,” Mulvaney said. He added later, “I have to imagine that the president knew who he was getting.”

Trump’s staunchly conservative choice to lead the White House budget office was elected in the 2010 Tea Party wave. He’s been a supporter of the House GOP’s plan to cut back Medicare by turning it into a voucher-like program for future retirees. Trump opposes the idea and has made it clear he doesn’t support dealing now with the program’s financial shortfalls.

Mulvaney said he will present Trump with many options to shore up Social Security, Medicare and Medicaid. As a member of Congress, Mulvaney has signed a pledge not to raise taxes.

He would no longer be bound by that pledge if he is confirmed by the Senate.

Mulvaney appeared before two Senate committees on Tuesday as the Congressional Budget Office revealed new estimates showing that Trump has inherited a stable economy and a government that is on track to run a $559 billion budget deficit for the year.

Social Security and Medicare have long-term financial problems that will become harder to fix the longer Congress waits to act.

Unless Congress acts, Social Security’s trust funds will be depleted in 2034, and Medicare’s trust fund for inpatient care will be exhausted in 2028, according to the trustees who oversee the programs.

If Congress allows either fund to run dry, millions of Americans living on fixed incomes would face steep cuts in benefits.

“If we do nothing, then by the time I retire there will be an across-the-board 22 percent cut in my Social Security benefits,” Mulvaney said. “We do have a chance to fix these programs.”

Mulvaney also faced questions on his failure to pay more than $15,000 in payroll taxes for a household worker more than a decade ago.

Sanders said that the lapse should disqualify Mulvaney from being confirmed, though most Democrats didn’t raise the issue. Sanders noted that Mulvaney voted for a bill in 2015 that would disqualify people with serious tax delinquencies from being federal employees.

Mulvaney said he failed to pay the taxes for a babysitter because he did not consider her a household employee.

“We made a mistake,” Mulvaney said.

Mulvaney said his wife had triplets in 2000 and they hired a babysitter. She worked for the family for four years but, Mulvaney said, she did not live with them.

Mulvaney said he didn’t realize that he should have paid the taxes until he was preparing for the nominating process. He said he has since paid the taxes.