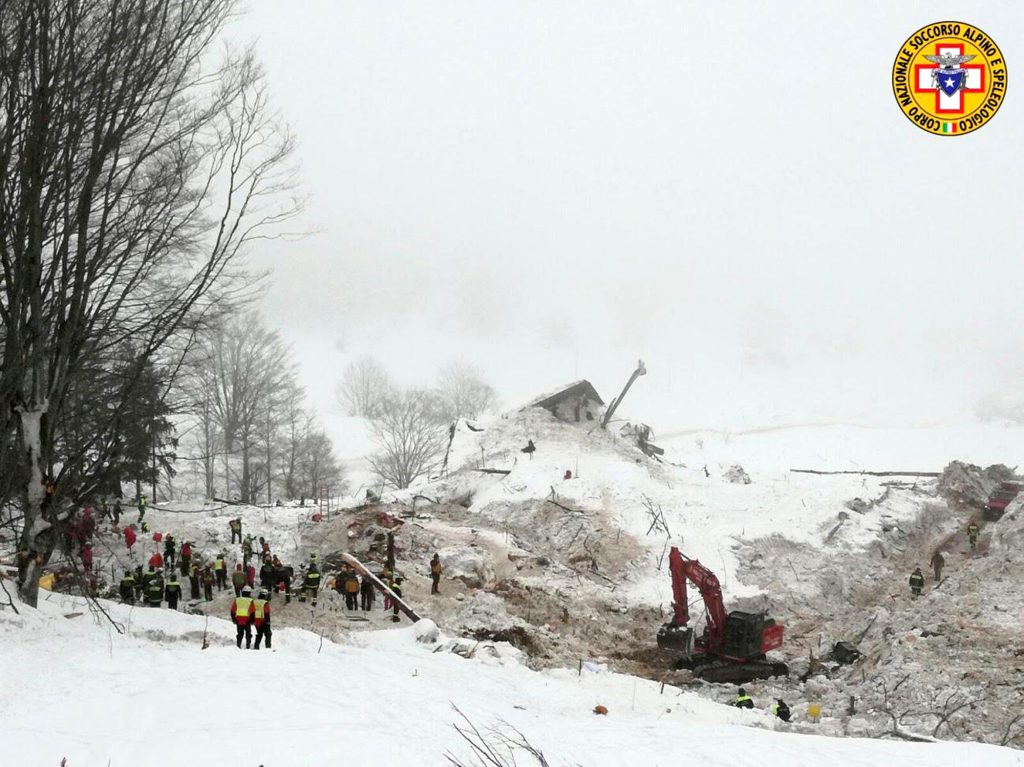 Hopes faded on Tuesday that any more survivors of the devastating avalanche that buried an Italy hotel would be found after the death toll more than doubled, to 17.

Meanwhile, Italy’s central Abruzzo region and its rescue crews were facing their second tragedy in a week when a helicopter crashed at a nearby ski resort, killing six people.

The twin disasters, which followed a series of earthquakes and weeks of heavy snow, have brought the region to its knees. Thousands of people have been without electricity for over a week, and emergency crews have been working around the clock.

The helicopter was ferrying an injured skier off the slopes of the Campo Felice ski area when it slammed into a mountainside buried in thick fog. Five crew members and the skier were killed.

Emergency workers at the center coordinating rescue efforts at the avalanche-entombed Hotel Rigopiano rushed to the chopper crash site about 60 miles away, and those on the ground at the scene hugged one another in solidarity.

The death toll from the Jan. 18 avalanche, meanwhile, climbed to 17 on Tuesday with the discovery of ten more bodies. Twelve people remain unaccounted for. Nine people previously had been pulled out alive from the rubble, the last one early Saturday.

Firefighters’ spokesman Alberto Maiolo said that search crews aided by excavators finally were able to penetrate the central part of the hotel for the first time and found bodies in the bar and kitchen area. He said there were no signs of life.

“Logically, hopes fade as time passes, but we are continuing to search and trying to do it as quickly as possible,” he said.

The first funerals were held on Tuesday, with crowds gathering under a steady rain outside the hilltop church in Farindola to pay their respects to Alessandro Giancaterino, the hotel’s chief waiter.

Giancaterino, one of the first victims pulled from the wreckage, had offered to stay for a double shift on Jan. 18 to spare a colleague from having to make his way to the hotel through the snow, which was two to three meters (six to 10 feet) high in some places.

“He was a great hard worker. He was very professional,” said his brother, Massimiliano Giancaterino. “This is the memory that I want to keep of my brother, beyond obviously the private ones that I keep in my heart.”

Prosecutors are investigating whether a series of missed communications, underestimations of risks and delays in responding to days of heavy snowfall contributed to the toll from the avalanche. In addition, they are looking into the original construction of the isolated resort and whether it should have been open for business at all in such conditions.

Giancaterino, who is also a former mayor of Farindola, said it was useless to speculate now — while an investigation was just beginning — about whether the tragedy could have been avoided.

“Now it is not the time for hypothesis,” he said. “It is the time of pain and above all my thoughts go to the friends and relatives of those who are still missing,” he said.

Two of the avalanche’s youngest survivors, Samuel Di Michelangelo and Edoardo Di Carlo, were discharged from the hospital on Tuesday. Officials have confirmed that Edoardo’s parents were killed in the avalanche, while Samuel’s are still unaccounted for.