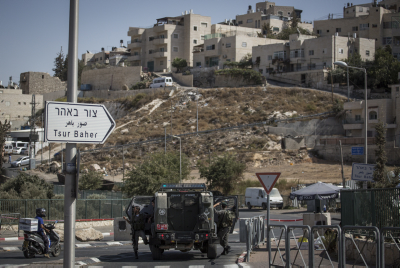 The killer of Alexander Levlovitz (64), Hy”d, who was murdered on Erev Rosh Hashanah in 2015 in an attack by Arab terrorists, was sentenced to 18 years in prison on Monday. The terrorist, a resident of the Arab neighborhood of Tzur Baher in Yerushalayim, was also required to pay NIS 100,000 to the family of the victim in damages

Levlovitz was killed when he drove in the Armon Hanatziv neighborhood into the midst of an Arab riot, which developed with no warning. Three terrorists were indicted on charges of manslaughter in the case, with the oldest, Abd Du’iyat, who was 19 at the time of the attack, sentenced Monday. He was convicted of picking up a rock weighing about a kilogram and slamming it through the window of the car Levlovitz was driving, forcing him to lose control of the vehicle and crash. He was badly injured in the chest area and died of his wounds later.

The 18-year sentence was part of a plea deal in which the terrorist pleaded guilty to manslaughter charges, officials said.

Overnight Monday, security officials said they arrested eight wanted security suspects in areas across Yehuda and Shomron. The suspects were wanted for participating in rioting and throwing stones and firebombs that endangered Israeli civilians and IDF soldiers. All were being questioned on their activities by security forces.