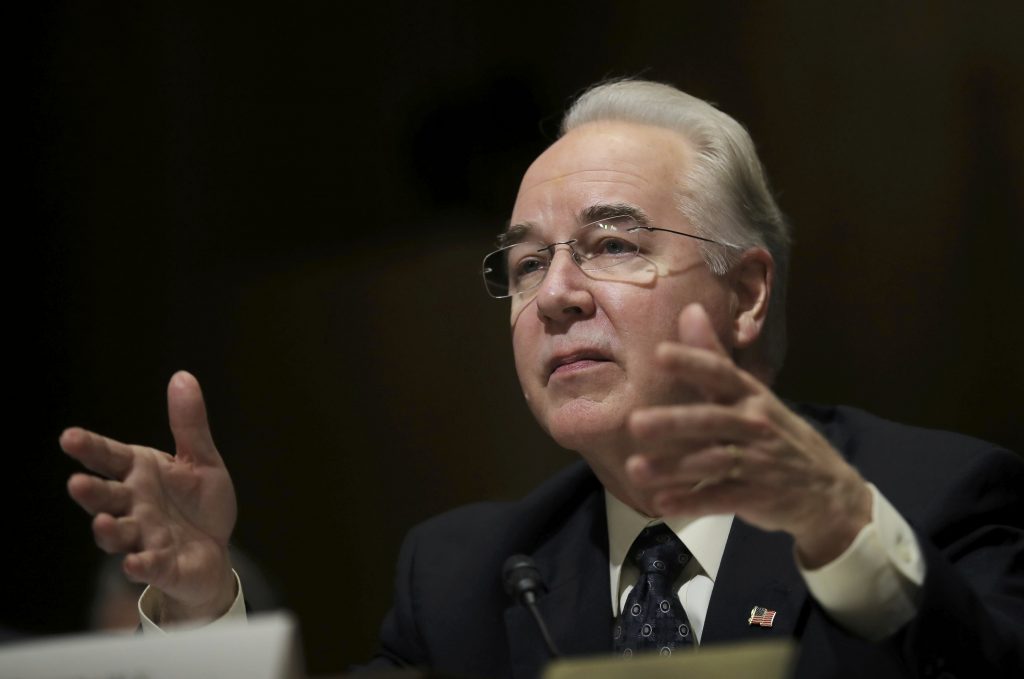 Democrats criticized stock purchases by President Donald Trump’s pick for health secretary on Tuesday at a Senate hearing where Republicans defended the nominee but Democrats attacked his support for tearing down President Barack Obama’s health care overhaul and his financial activities as a member of Congress.

The nominee, Rep. Tom Price, R-Ga., was accused by the Finance Committee’s top Democrat of “a conflict of interest and an abuse of his position” for buying shares in health care firms that could benefit from congressional legislation. Sen. Ron Wyden, D-Ore., said Price had also omitted information in his responses to the Finance Committee’s questionnaire for nominees, and said the panel should delay approving Price’s nomination until it learns more.

Committee Chairman Orrin Hatch, R-Utah, accused Democrats of “what are, by and large, specious and distorted attacks.” He praised Price for having “the experience and qualifications” needed to head the Health and Human Services Department, which has an annual budget exceeding $1 trillion.

Price, 62, is a veteran conservative congressman and orthopedic surgeon from Atlanta’s suburbs who has long favored voiding Obama’s 2010 law and wrote his own proposed substitute for it. Chairman of the House Budget Committee until recently, he’s also favored revamping Medicare and Medicaid, which Democrats vehemently resist and Trump as a presidential candidate said he opposed.

Wyden questioned Price about the congressman’s purchase of around 400,000 shares last August of Innate Immunotherapeutics Ltd., an Australian drug company. Wyden said that Price had bought the stock at prices only available to insider investors, had understated the value of those shares in papers filed with the Finance Committee, and had obtained the stocks at a time when he could affect congressional legislation.

“Yes or no, does this show bad judgment?” Wyden asked.

Price said it did not and added, “The reality is everything I did was ethical, above board, legal and transparent.”

A bipartisan committee staff memo said Price reported the shares were worth as little as $50,000, based on the purchase price then, but they were worth up to $250,000 when he filed his forms to the Finance Committee. Price said he didn’t realize the form requested the updated value of the stock.

The memo also said Price had omitted from submitted forms any mention of a 2010 House Ethics Committee investigation into his campaign fundraising that was later dropped, as well as late tax payments and improper deductions involving rental properties.

GOP lawmakers intent on repealing Obama’s law continue trying to figure out how they would replace it. They plan a retreat in Philadelphia later this week to discuss what to do.

Tuesday’s hearing followed an executive order that Trump issued on Friday, his first day in office, which vaguely empowers federal officials to curb fiscal burdens imposed by Obama’s overhaul and give states more flexibility to interpret it. That could let agencies take steps like stopping fines for failure to buy coverage, but there could be procedural and political pitfalls to exercising those powers.

Wyden tried pinning Price down on that order, asking him to pledge that no American would lose coverage as a result of Trump’s order and that it wouldn’t be enforced until Republicans have enacted legislation replacing Obama’s law. Price didn’t answer directly, saying what Republicans do will “keep patients at the center of health care.”

Democrats repeatedly questioned Price about whether a Republican replacement for Obama’s statute would continue requiring insurers to cover people with pre-existing illnesses. Before Obama’s law, insurance companies did not have to do that because such consumers can be extremely costly to cover; and Trump has said he supports continuing such coverage.

“Nobody ought to lose insurance because they got a bad diagnosis,” Price said.

He said there are different ways of covering people who are already sick. He mentioned high-risk pools, in which people with high medical costs are pooled together to avoid having their expenses drive up premiums for healthier consumers. The system has produced mixed results.

Under questioning from Democrats, Price also said that people currently covered by the expansion of Medicaid by Obama’s overhaul should continue to be covered by that program or “a different vehicle” which he didn’t specify. Democrats and Republicans whose states have accepted the Medicaid expansion support its continuation, though many Republicans prefer ending the expansion and giving states more leeway in deciding how to spend all Medicaid funds.

Obama’s law has provided coverage to 20 million people by creating online marketplaces for those without employer-provided coverage and subsidizing many of them, and expanding Medicaid to lower-income people.

Trump has been pressuring Republicans to move quickly on legislation scuttling Obama’s law and replacing it.

As head of the huge Health and Human Services Department, Price would have enormous power to decide how Obama’s law is interpreted and enforced. For example, he could weaken the statute’s requirements that people buy insurance and larger employers provide it to workers by granting broader exemptions, or reduce the extent of coverage insurers must provide for 10 types of mandated health services.