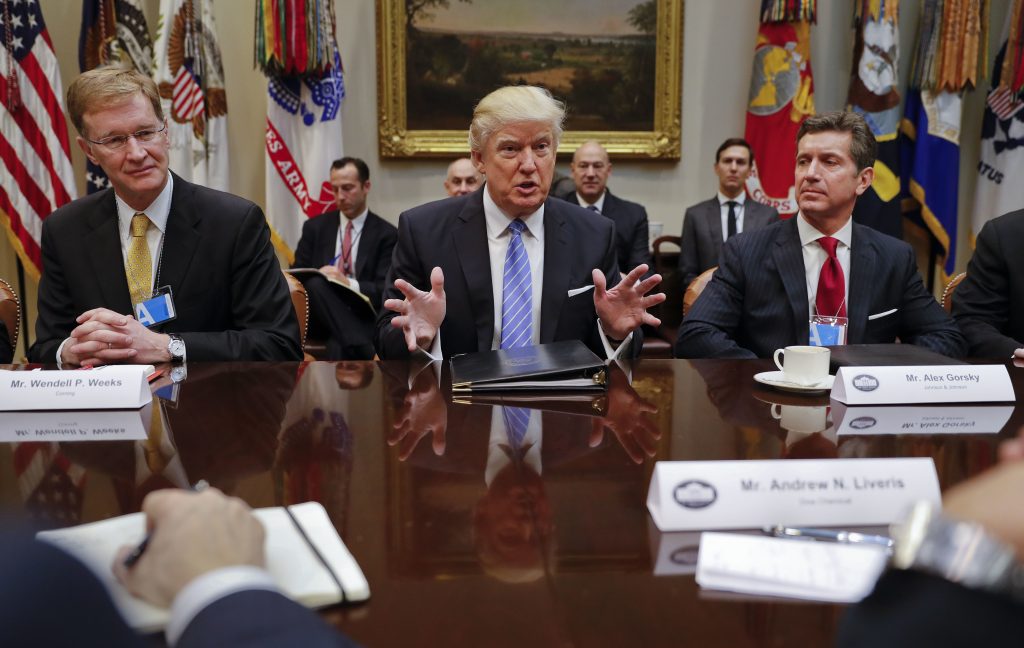 Opening his first official week in office, President Donald Trump warned business leaders Monday that he would impose a “substantial border tax” on companies that move their manufacturing out of the United States, while promising unspecified advantages to companies that manufacture domestically.

“All you have to do is stay,” he said during a morning meeting in the White House’s Roosevelt Room.

Tesla CEO Elon Musk and Marillyn Hewson of Lockheed Martin were among the executives who attended the meeting. The gathering kicked off a jam-packed day for the new president, including an evening reception with lawmakers from both parties and a sit-down with union leaders.

The president also planned to sign multiple executive orders in the Oval Office. Trump had pledged to quickly use his executive authority to withdraw the U.S. from the 12-nation Trans-Pacific Partnership trade pact agreed to under the Obama administration. He’s also expected to sign an order implementing a federal government hiring freeze.

President Trump ran for office pledging to overhaul U.S. trade policy, arguing that massive free-trade agreements have disadvantaged American workers. Since winning the White House, he’s aggressively called out companies that have moved factories overseas, vowing to slap taxes on products they then try to sell in the U.S.

“Some people say that’s not free trade, but we don’t have free trade now,” Trump said Monday. He also reiterated his campaign pledge to significant curb regulations, though he insisted that doing so would not compromise worker safety.

President Trump’s outreach effort comes after a tumultuous first weekend in the White House that included lambasting news organizations for correctly reporting on the size of the crowds at his inauguration and mass protests against his presidency on the following day.

Trump delivered a more unifying message Sunday and sought to reassure Americans he was up to the daunting task ahead.

Speaking in the White House East Room during a swearing-in ceremony for top aides, the president warned his staff of the challenges ahead but declared he believed they were ready.

President Trump said his staff was in the White House not to “help ourselves” but to “devote ourselves to the national good.”

President Trump spoke Sunday with Israeli Prime Minister Binyamin Netanyahu, who accepted an invitation to visit the White House in early February. The prime minister said he is hoping to forge a “common vision” with the newly inaugurated president that could include expanded settlement construction and a tougher policy toward Iran.

“We’re going to start some negotiations having to do with NAFTA,” he said of his meeting with Pena Nieto. Mexico is part of the free trade agreement with the U.S. and Canada. Trump said he also will discuss immigration and security at the border. He has promised to build a wall along the length of the southern border and insisted that Mexico will pay for it.

Later in the week, he’ll address congressional Republicans at their retreat in Philadelphia and meet with British Prime Minister Theresa May.