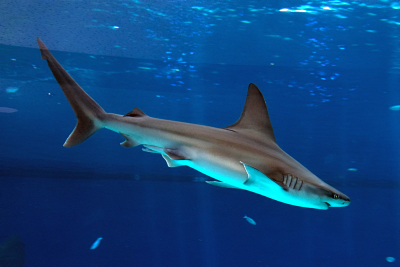 A word of caution to those planning a swim in the waters off Hadera: Watch out for sharks. At least 150 have been observed swimming off the beach in that area, police said, reiterating a warning to Israelis to stay away from the sharks — despite the growing popularity of “shark swims,” organized by tour guides.

The shark pilgrimage is an annual one, as the sea creatures that normally ply the western Mediterranean and the Atlantic are attracted to the eastern Mediterranean’s warmer water temperature. Hadera has been an especially popular hangout for them, as the water there is warmer than in other areas due to the runoff from the large Israel Electric Company plant on the shore. The warmer temperature also enhances the development of plankton and small sea creatures, supplying the sharks with a rich diet.

According to Israeli oceanographers, as many as 32 types of sharks can be found off Israeli waters between December and March, at which time the sharks begin to return to their regular habitats. The largest number of them are sandbar sharks, one of the biggest coastal sharks in the world. They are generally not aggressive, and are considered among the safest sharks to swim among.

But officials aren’t taking any chances — both for the welfare of swimmers and in order not to overly bother Israel’s winter guests. The Parks and Nature Authority has issued a stern warning against swimming with the creatures, and has threatened to criminally prosecute those caught violating the rule — if, of course, they survive their swim intact.