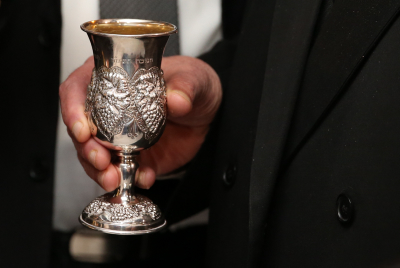 It’s against the law to sell alcohol in Israeli supermarkets and groceries after 11 p.m., and most times that works out fine – except on Thursday nights, when the stores are open late, to accommodate working people who need to go shopping for Shabbos. Many supermarkets, especially those catering to the chareidi public, are open until midnight and even beyond – but customers who get to the checkout line with wine in their baskets after 11 PM are out of luck when trying to buy that necessary item.

Enter the so-called “Kiddush Law,” proposed by MKs Rabbis Moshe Gafni, Uri Maklev and Yaakov Asher, which would change the law just slightly. While the prohibition against late-night alcohol sales would remain in place, wine would be exempt, in order to allow people shopping for their Shabbos needs to buy the wine they need for kiddush.

According to the MKs, many families find that their schedules are badly disrupted by the rule, especially those whose designated shopper cannot get to the store until very late. “In recent years, many supermarkets have extended their hours to accommodate shoppers who work or learn during the day and evening, and are unable to get to the store early,” they wrote in a codicil to the bill, which was presented to the Ministerial Law Committee Sunday. “Many stores remain open late on Thursday nights and erev chag in order to enable shoppers to buy what the need for their families. We seek to exempt wine from the rule that alcohol cannot be sold after 11 p.m.” The law would apply only to supermarket chains, and not to grocery stores or neighborhood candy and snack shops, many of which also sell alcohol, the MKs said.

“The original purpose of the law against late-night alcohol sales was to prevent the sale of large amounts of alcohol” that could lead to drunkenness, said MK Rabbi Maklev. “Unfortunately the law is injurious to shoppers who seek to buy wine not to get drunk on at night, but for their Shabbos and Yom Tov tables, or for cooking. Our measure will correct this situation.”