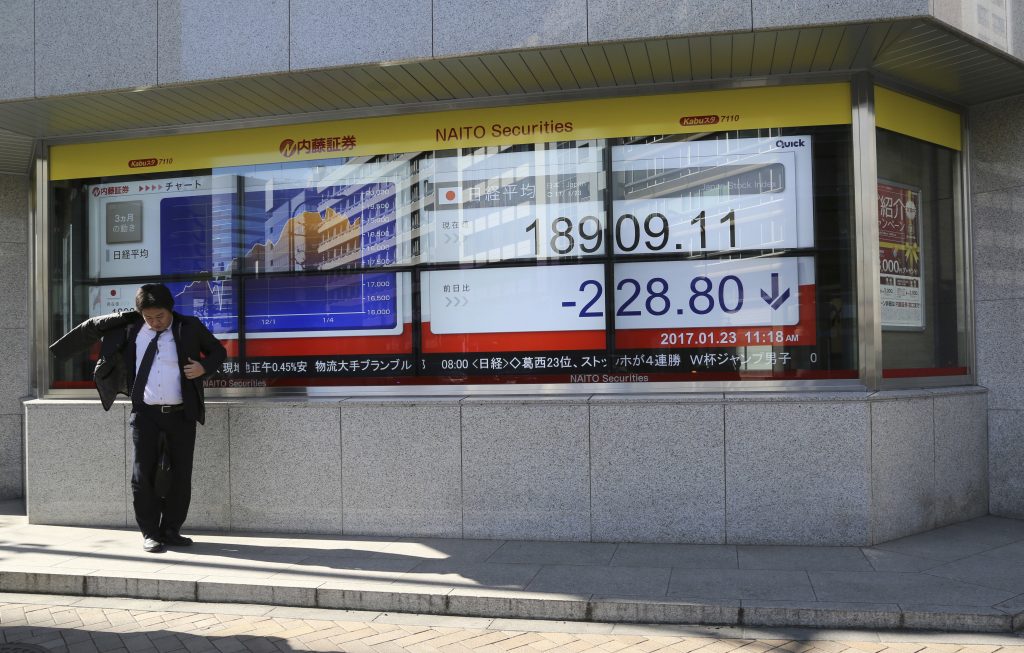 The dollar slid broadly on Monday after President Donald Trump struck a protectionist tone in his inauguration speech, undermining optimism over the U.S. economy spurred by his promises of tax cuts and other stimulus.

Japan’s Nikkei dropped 1.1 percent while shares in Australia dropped 0.8 percent after the Trump administration, on its first day in office, declared its intention to withdraw from the Trans-Pacific Partnership (TPP), a 12-nation trade pact that Japan and Australia also have signed.

European shares were expected to fall, too, with spread-betters looking to a drop of 0.4 percent in Britain’s FTSE and 0.3 percent in Germany’s DAX.

Other Asian shares were more resilient, however, in part due to the dollar’s weakness and relief that there were no negative surprises, with Trump refraining from labeling China as a currency manipulator for now, an accusation he made while campaigning.

“At least, there was no negative news this weekend, like a border tax or the currency manipulator, even though they could come up in the future,” said Yukino Yamada, senior strategist at Daiwa Securities.

In his Inaugural Address, Trump pledged to end what he called an “American carnage” of rusted factories and vowed to put “America first,” laying out two simple rules – buy American and hire American.

Trump also said on Sunday he plans talks soon with the leaders of Canada and Mexico to begin renegotiating the North American Free Trade Agreement (NAFTA).

“The market is getting nervous about the possibility that the world’s trade might shrink,” said Koichi Yoshikawa, executive director of financial markets at Standard Chartered Bank in Tokyo.

“Many of his policies, including tax cuts and infrastructure spending, need approval from the Senate and that [may not be] easy,” he said. “The markets that had been led by expectations on his policy since the election are now the dragged down by the reality.”

The dollar had soared late last year on expectations that Trump’s pledges to cut taxes and hike infrastructure spending would boost the U.S. economy, spurring inflation and higher interest rates. But optimism is starting to fade as details of his tax policies remained sketchy. It is not clear if the Congress will agree to any plan that could drastically increase budget deficits.

“If all of Trump’s tax proposals [were] implemented, that alone would increase the deficit by more than two percentage points of GDP. It’s questionable if the Republicans will agree to that. Any fiscal stimulus will be a mild one,” said Hiroko Iwaki, senior strategist at Mizuho Securities.

The Mexican peso, which has weakened the most on Trump’s protectionist and anti-immigration stance, rose 0.8 percent to a two-week high of 21.415 per dollar. The rise came after its 1.7 percent gains on Friday, its biggest in two months.

The two-year yield, which is more sensitive to the Fed’s policy outlook, dropped sharply to 1.180 percent from Thursday’s three-week high of 1.250 percent, giving back much of gains made after Wednesday’s upbeat comments from Federal Reserve Chair Janet Yellen.

Oil steadied after Friday’s gains, as support from statements over the weekend from OPEC and other producers (that they have been successfully implementing output cuts) were offset by a surge in U.S. drilling.