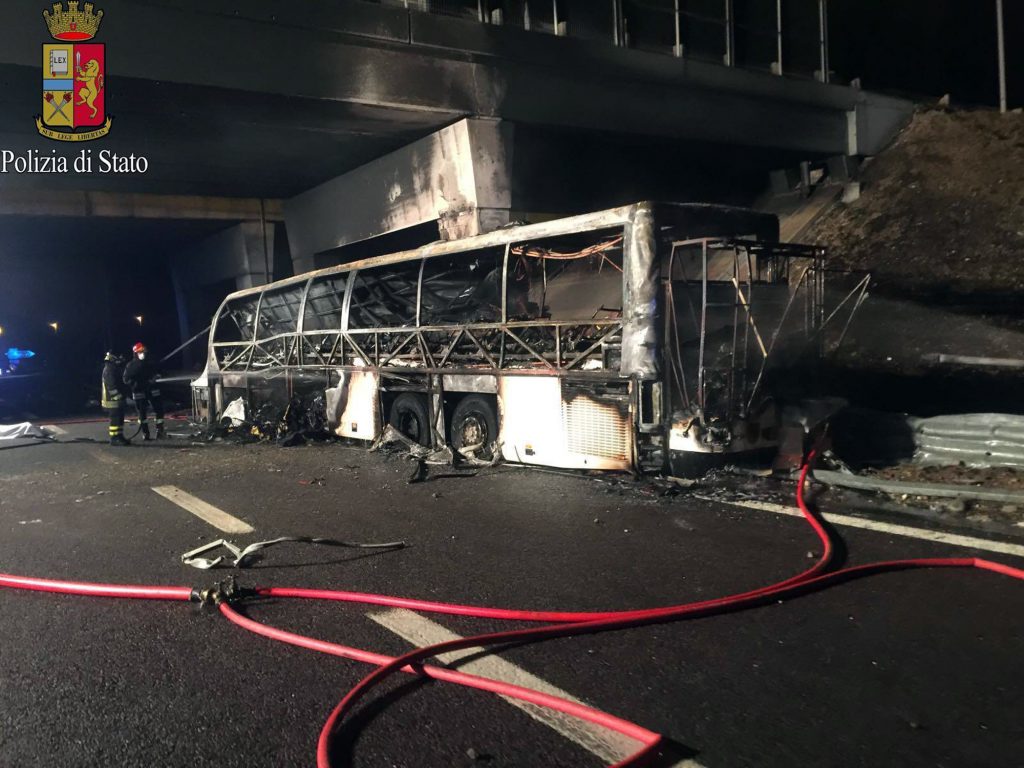 At least 16 people were killed and dozens injured, after a bus carrying Hungarian students crashed and burst into flames in northern Italy, authorities said on Saturday.

The bus went off the road near a highway exit close to Verona around midnight on Friday. The local highway police chief said it was carrying mostly teenage students, teachers and parents.

The number of victims could rise to 18, “but certainly no more than that,” the Hungarian consul in Italy, Judit Timaffy, told reporters in Verona. At least two of those hurt are in serious condition.

“Many children among the victims of the accident in Verona, a bus catches fire on impact with a pillar,” national police said on Twitter.

Hungarian Foreign Minister Peter Szijjarto told a news conference that the teenagers were from a Budapest secondary school, returning from their annual ski camp in France. A spokesman for the minister told Reuters the school was the Szinyei Gimnazium.

The Hungarian government declared Monday a day of national mourning.

The official passenger list included 54 people, Gabor Toth, director of the school, told national news agency MTI. Thirty-six students, some former students, three teachers and the family of one of the teachers were on board, he said.

Earlier, Szijjarto had said the exact number of passengers on board was unknown, but it was higher than the director of the school had known about.

A physical education teacher, who suffered severe burns, returned to the bus several times to save other passengers and all of the survivors were “well taken care of,” Timaffy said.

Six adults are seriously injured and are being treated in two different hospitals in Verona, Hungarian channel M1 reported. Of them, two men are in life-threatening condition, a spokesperson for the Hungarian national ambulance service said, speaking to M1.

Survivors were staying in a hotel south of the city, the minister said.

Local highway police chief Girolamo Lacquaniti told SKY TG24 that identifying the victims was still at an early stage and was advancing “with extreme difficulties.”

Magistrates and authorities from the highway police were meeting in Verona, with an afternoon press conference cancelled and not rescheduled.

In Budapest, hundreds gathered outside the secondary school in city center, with police having to close part of the street.

Lacquaniti said the cause of the crash would be investigated: “We are not aware of other vehicles being involved, it seems to have gone off the road of its own accord.”

The bus had left France around 4:30-5:00 p.m. on Friday (local time) and the two drivers had a shift change approximately an hour before the accident, shortly before midnight, said Timaffy.

She added that one of the survivors had told her that he had seen the driver “swerve from time to time.”

Both drivers were Hungarian, state news agency MTI wrote, quoting an unnamed employee of the bus provider, denying earlier press reports that one was French.

The company employee added that the bus was from the German company Setra, had a capacity to seat up to 59 people, was in good condition and that the drivers were experienced.

“There was a lot of black smoke coming out of the back of the bus,” a Slovenian truck driver who was driving behind the bus before it went off the road told SKY TG24.

“With my prayers, I am with the families and friends shocked by the tragedy,” Hungarian Prime Minister Viktor Orban said in a statement sent to MTI.