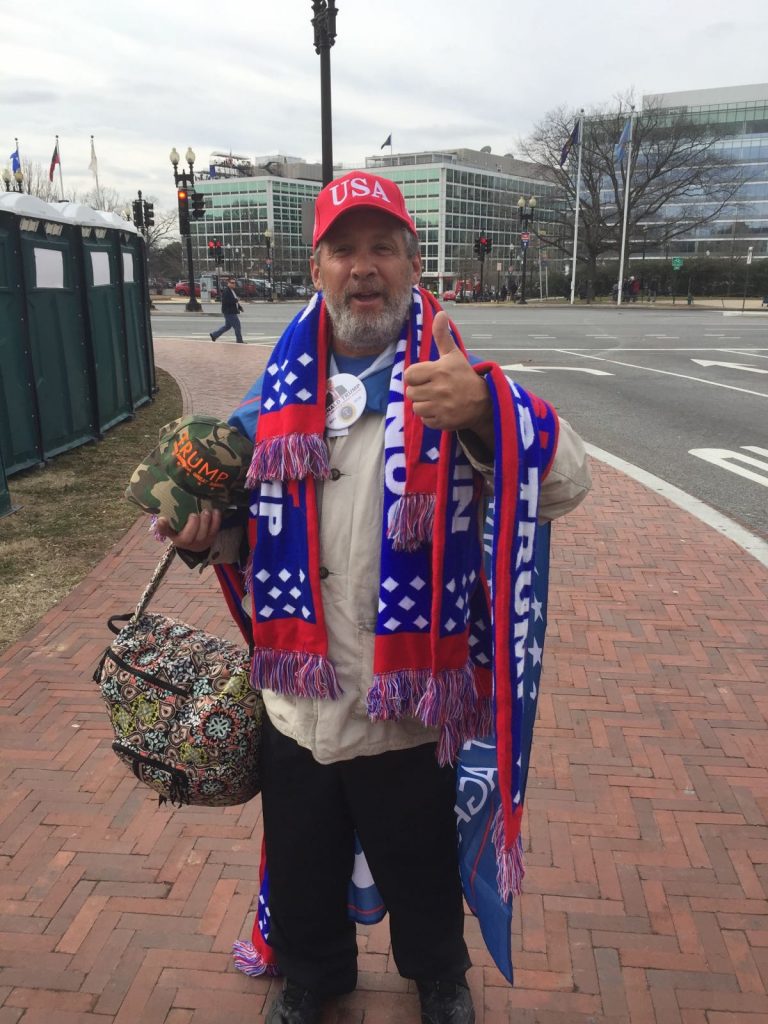 There are Donald Trump-shaped cookie cutters, “Drain the swamp” sweatshirts and candles meant to smell like the new president — a combination of “all of the classiest smells,” according to the product’s description. Keep searching among the Trump-inspired flasks, paperweights and peppermints and you’ll find coffee mugs that say “Build that wall” and a penny stamped with “Trump” selling for $2.75.

Online shops, street vendors and high-end boutiques around town said they spent weeks preparing for Friday’s inauguration with equal parts sincerity and snark in hopes of cashing in on fans and foes of the next president.

At Chocolate Moose, a novelty gift shop a half-mile from the White House, shelves were lined with Trump whoopee cushions and chocolate miniatures of the Capitol. The Trump mask, a Halloween favorite, was back in stock.

“Up to now, absolutely, it’s been all about the gag stuff,” said Michele Cosby, the store’s owner.

The best-selling item? Toilet paper emblazoned with Trump’s face. “We sold cases upon cases of it,” Cosby said. “And at $12 a roll, it wasn’t cheap.” (But, she added, she stopped selling the popular item once Trump became president-elect: “We didn’t want to cross the line.”)

At the Great Republic, which had inauguration pop-up shops at the St. Regis and Mandarin Oriental hotels in Washington, revelers could pick up pens made of wood from the White House and hand-painted with portraits of Trump for $1,950 each.

Over in Georgetown, local jeweler Ann Hand had sold nearly 1,000 inaugural pins bearing Trump’s name and a slew of pavé stones. She was also selling inaugural cuff links, charm bracelets and a limited number of mother-of-pearl pins with Swarovski crystals for $250.

“We were astounded by the reaction that we got,” Hand said. “All these inaugurals seem to take on a life of their own — there are those who love their candidate and those who don’t.”

Jim Warlick, owner of White House Gifts, said that he spent months buying $100,000 worth of items for the inauguration. There was just one problem: He had projected the wrong winner.

“So here we were, the day after the election, with a store full of Hillary T-shirts, mugs, wineglasses, you name it,” he said. “We didn’t have a single Trump item.”

Since then, he has amassed a collection of Trump merchandise, some serious, some silly, such as sunglasses that come with a mop of hair glued to the top. (He continues to sell the Clinton items, which last week were marked down about 15 percent.)

“It’s been a very tough inaugural to buy for,” said Warlick, who began selling inauguration-related items in 1981. “Usually we only do pro-presidential items, but this time we also have ‘resistance products’ because people are so divided.”

A search for “Trump” on the crafts site Etsy turned up more than 18,000 results for T-shirts, bracelets, dolls and bumper stickers celebrating his win and bemoaning it. There were pins that say “Deplorable lives matter” and handmade bracelets stamped with “Love trumps hate.”

But on Washington streets, vendors said they just hadn’t seen as much demand this year for president-related mugs, T-shirts, shot glasses and key chains as they as they had ahead of previous inaugurations. In a town where 91 percent of residents voted for Clinton, they said it has been difficult to sell Trump-related merchandise.

“We’re all dealing with the same dilemma: What quantity of shirts do we get?” said a vendor with a booth at Connecticut Avenue and K Street NW who declined to give his name. “. . . We cannot afford to get stuck with all this Trump stuff. People in Washington resent that fact that we even carry these shirts.”

Warlick said he expects to sell inauguration-related items through May. For now, a line of Michelle Obama merchandise continues to outsell both his Trump and Clinton inaugural lines.

“Sales have been nowhere near what they were with Clinton and Obama,” Warlick said, adding that he expects to sell about one-third the Trump merchandise as he did for Obama back in 2009. “Obama’s first inaugural was — to use Trump’s own words — yuge.”