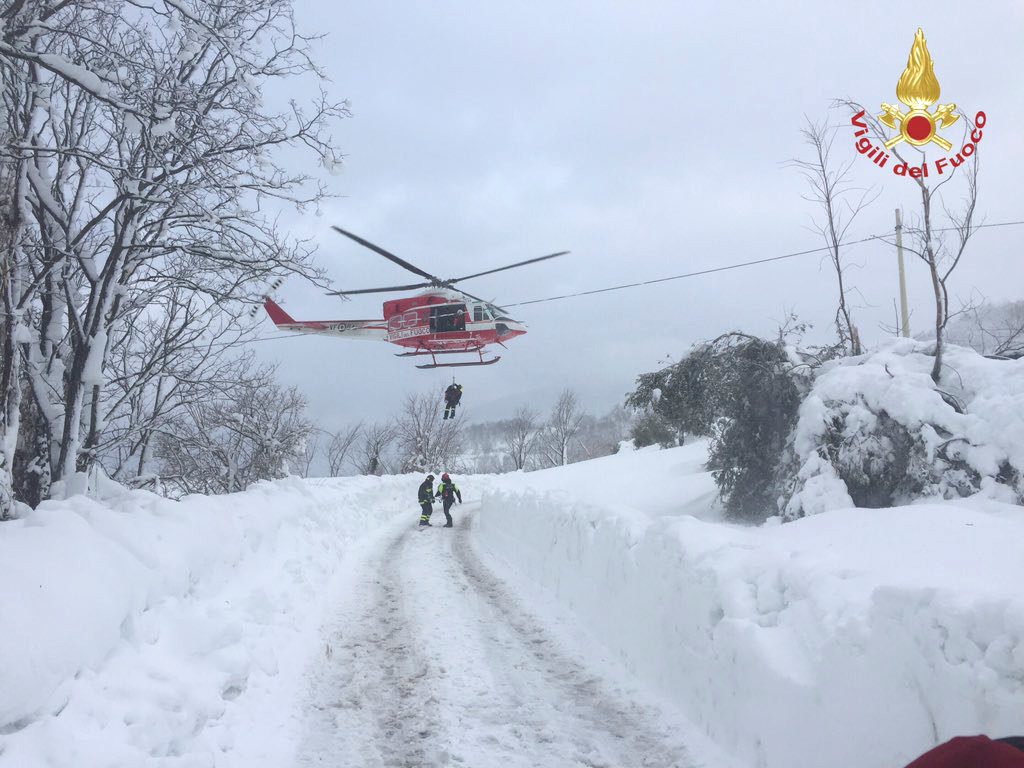 Rescue workers were met with an eerie silence Thursday when they reached a four-star spa hotel struck by an avalanche in a mountainous earthquake-stricken region of central Italy. At least 30 people were missing, including at least two children, authorities said.

Guests at the three-story Hotel Rigopiano in the central Abruzzo region alerted emergency workers of the disaster on Wednesday, following a series of quakes in the region.

“Help, we’re dying of cold,” one couple wrote rescuers, according to the ANSA news agency. Another man, identified by news reports as Fabio Salzetta, sent a phone message saying he had escaped with a maintenance worker, but that others were trapped inside.

Corriere della Sera quoted the message as saying: “Some walls were knocked down.” And: “I’m outside with a maintenance worker but you can’t see anything of the hotel, there’s only a wall of snow in front of me.”

When rescuers on skis arrived in the early morning hours of Thursday, they found just two people alive, according to news reports. Civil protection authorities said that 30 people were missing. The ANSA news agency quoted a rescuer as saying that there were fatalities, but details weren’t immediately available. Just one body was reported removed from the hotel by late morning Thursday.

One of those saved was 38-year-old Giampaolo Parete, who told rescuers he had gone outside to get something from the car, which was untouched by the avalanche, but that his wife and two children were buried inside, the news agency ANSA reported.

Rescue efforts were hampered by the large snowfall in recent days, making it difficult to clear roads for heavy vehicles and ambulances to get through.

The buried hotel was just one of several rescues underway in an area that has been pummeled by more than three feet of snow in recent days — storms that have knocked out power and phone lines and blocked roads, isolating towns and hamlets.

Video footage from Italian financial police force GDF showed a gray-haired man being led to safety by rescuers through a path dug out of deep snow from another rescue in the region.

Snow continued to fall throughout the region, with reports of people being isolated in many places. A resident of a town in the province of Teramo, Daiana Nguyen, told SKY TG24 that 10 feet of snow had fallen and that people “were completely isolated.”

The timing of the avalanche Wednesday and the messages remained unclear, but the hotel posted a notice that its phones were down around 9 a.m. following the first of Wednesday’s quakes, including one with a 5.7 magnitude. It wasn’t immediately clear if the temblors triggered the avalanche.

Video shot by rescue teams showed huge piles of filthy snow and debris piled up inside corridors, stairwells and an indoor pool area, having slammed through the outer walls of the building. The audio is silent. The largest wall of snow shown was in the pool area, where plastic lounge chairs were flipped on their sides.

Aerial video shot by helicopter crews showed rescue workers on top of the snow-covered hotel, digging holes down to try to get in.

The civil protection agency said that they were working to get rescue vehicles to Hotel Rigopiano through roads covered in snow, joining initial rescue efforts overnight by alpine rescue teams who went in on skis.

The hotel is about 30 miles from the coastal city of Pescara, at an altitude of about 3,940 feet.

An ambulance was blocked about 5-½ miles from the hotel, according to SKY, which also said that snowfall was so heavy that snowplows have had trouble clearing the road to the hotel.

The mountainous region of central Italy has been struck by a series of quakes since August that destroyed historic centers in dozens of towns and hamlets. A deadly quake in August killed nearly 300, while no one died in the strong aftershocks in October largely because population centers had already been evacuated. In the meantime, the entire region has been hit by freezing weather and buffeted by snowstorms, piling more suffering onto the hard-hit population.

People left homeless by the earlier quakes had been moved to hotels in the region, but it wasn’t immediately clear if any of them were staying at Hotel Rigopiano, which is located in the Gran Sasso National Park.

On Tuesday, the hotel posted photos of the recent snowfall, calling it “a dream Tuesday. Snow is giving us spectacular scenes.” It advised guests that roads were still passable but snow tires were required with chains for cars.