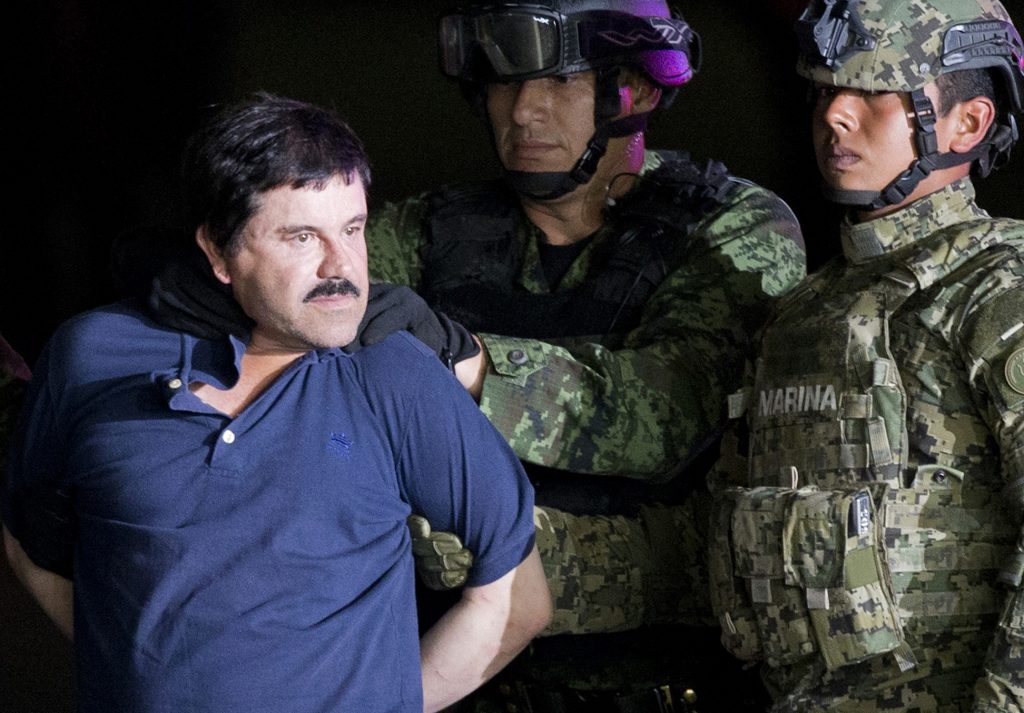 Joaquin “El Chapo” Guzman, Mexico’s most notorious cartel kingpin who twice made brazen prison escapes and spent years on the run as the country’s most wanted man, was extradited to the U.S. Thursday to face drug trafficking and other charges.

Mexico’s Foreign Relations Department announced Guzman was handed over to U.S. authorities for transportation to the U.S. on Thursday, the last full day of President Barack Obama’s administration and a day before Donald Trump is to be inaugurated.

The U.S. Justice Department issued a statement confirming that Guzman was en route to the United States and expressed gratitude to Mexico for its cooperation.

A senior U.S. official said the U.S. Drug Enforcement Administration took custody of Guzman in Ciudad Juarez, which is across the border from El Paso, Texas, and a plane carrying him departed for New York at 5:31 p.m. EST. The official was not authorized to discuss the matter publicly and agreed to give the information only if not quoted by name.

The convicted Sinaloa cartel boss had been held most recently at a prison near Ciudad Juarez. He was recaptured a year ago after escaping from a second maximum-security prison through a tunnel dug to his cell.

The 2015 escape was highly embarrassing for the government of President Enrique Pena Nieto, and Mexican officials were seen as eager to hand the headache off to the United States afterward. Guzman’s lawyers have fought extradition since his recapture.

Guzman, who is in his late 50s, faces the possibility of life in a U.S. prison under multiple indictments in six jurisdictions around the United States, including New York, San Diego, Chicago and Miami.

A federal indictment in the Eastern District of New York, where Guzman is expected to be prosecuted, accuses him of overseeing a trafficking cartel with thousands of members and billions of dollars in profits laundered back to Mexico. It says Guzman and other members of the Sinaloa cartel employed hit men who carried out murders, kidnappings and acts of torture.

He was first indicted by a U.S. federal grand jury in July 2009. A superseding indictment was issued in May charging him and Ismael “El Mayo” Zambada with a variety of drug, gun and money laundering charges as part of an ongoing criminal enterprise.

The Mexican Foreign Relations Department’s statement said a court had ruled against Guzman’s appeal and found that his extradition would be constitutional.

Guzman’s first prison break was in 2001. He spent more than a decade at large before being captured in 2014. The following year he broke out through the mile-long tunnel dug directly to the shower in his cell.

It was while on the lam a second time, in fall 2015, that he held a secret meeting with actors Sean Penn and Kate del Castillo. The encounter was the subject of a lengthy article Penn published in Rolling Stone last January, right after Mexican marines re-arrested Guzman in the western state of Sinaloa.

Guzman was initially returned to the Altiplano prison outside Mexico City where he escaped through the tunnel. Last May, officials abruptly moved him to the prison in the desert near Juarez.

The White House, which was down to a skeleton staff hours before Trump takes office, said it had no immediate comment.