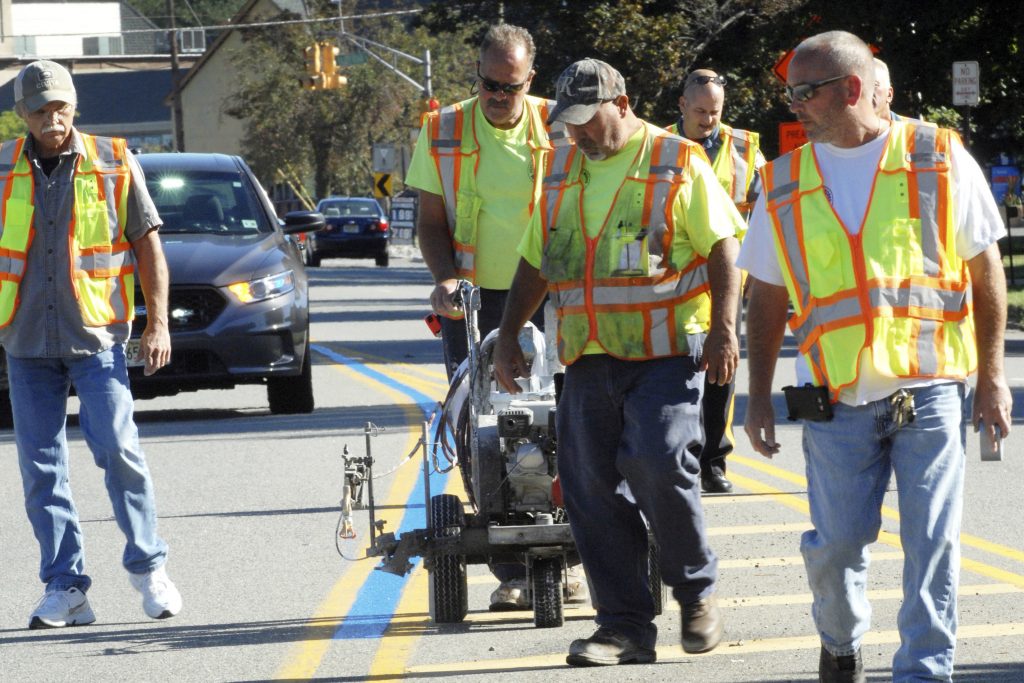 Two New Jersey congressmen on Tuesday introduced legislation to allow towns to paint strips of blue on roadways to honor police after regulators said the tributes crossed the line of federal safety rules.

The bill by Republican Leonard Lance and Democratic Bill Pascrell would permit the blue lines that have sprung up in towns around the state and elsewhere after 135 police officers were killed in the line of duty nationally last year.

The thin blue line traditionally represents the role law enforcement serves, standing between law-abiding citizens and criminals. Communities saw this as an appropriate way to thank officers and others for their efforts and the sacrifices they make.

But after an official in Somerset County wrote to the Federal Highway Administration to get clarification about whether the blue lines painted between the double yellow lines in the center of roadways were permitted, agency officials informed them that the lines don’t comply with the provisions of the Manual on Uniform Traffic Control Devices for Streets and Highways. That manual defines the standards for such devices on all public roadways, bikeways and private roads open to public travel.

“We appreciate and understand the efforts by local governments and others that convey support for law enforcement officers,” FHA spokesman Neil Gaffney said. “However, the yellow lines down the center of a road are meant to control traffic and modification of that marking could cause confusion, accidents and fatalities. Our number one priority is the safety of all drivers.”

James Batelli, police chief in Mahwah, where a 150-foot blue line has been painted near the police department’s headquarters, said transportation officials should have more important things to address than blue lines painted on roadways.

“If you look up the word ‘bureaucracy,’ you will find the [standards manual],” Batelli said. “This should be very low on the list of priorities, and it probably shouldn’t even be on the list.”

He called the line “a nice gesture that shows the community understands what we deal with on a daily basis.”

“It means a lot to our officers, who see it every day as they drive by. I’m not saying it’s a game-changer, but it has an impact,” he said. “I don’t think someone sitting in an office in Washington or Trenton may get that.”

It’s unclear if towns could be penalized for not removing the blue line, such as facing fines or losing funds, Gaffney said. It’s also not clear if blue lines have ever contributed to an accident or other traffic issue. New Jersey transportation officials say they are unaware of any such instances in that state or other areas.

In a bid to avoid potential problems, some communities have placed their blue lines in public areas, such as municipal parking lots or parks. But in many towns where lines were painted on roadways, officials said they plan to leave them in place.

James Pasco, executive director of the Washington-based Fraternal Order of Police, the largest law enforcement labor organization in the United States with more than 330,000 members, derided the letter from federal regulators as bureaucratic overreach.

“Any driver who gets confused by the color of the line is a confused driver,” Pasco said. “It’s a lot safer to have a blue line in the middle of the street than it is for police officers to get shot at.”