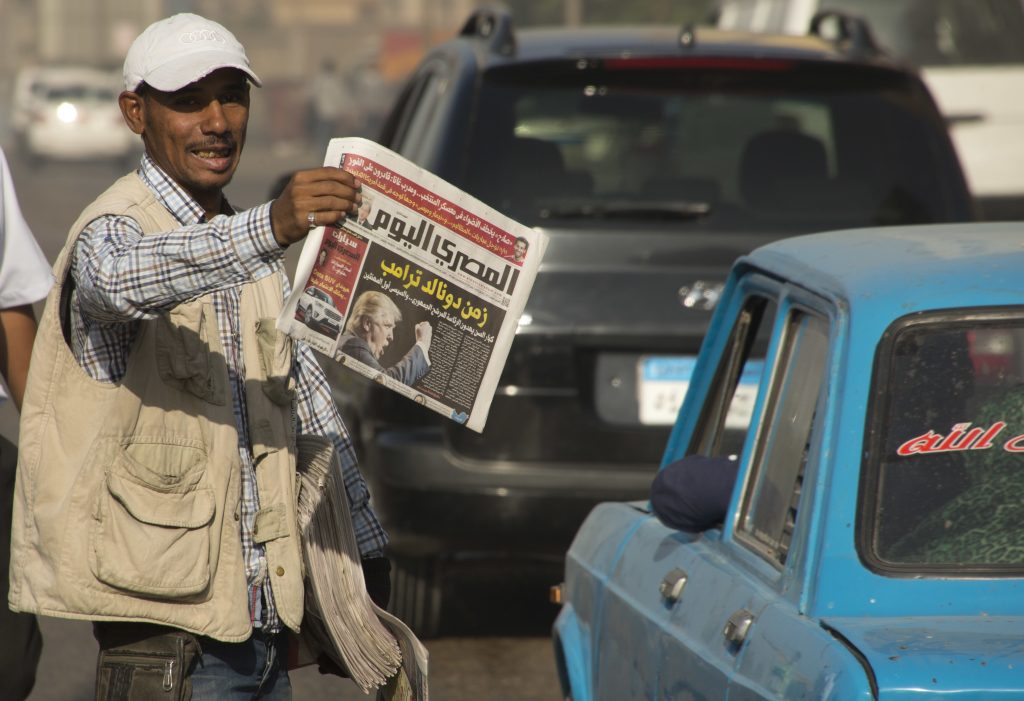 Donald Trump’s all-but-dismissal of human rights as a foreign policy principle could land like an earthquake across a Middle East landscape beset by warring factions and beleaguered governments, with some players eyeing the prospect of once unimaginable new alliances.

Syria is the foremost test of Trump’s promise of a return to a hard-headed realpolitik and could quickly show whether America is truly abandoning promotion of democracy and the rule of law in a way that could reshape much of the region’s post-Cold War, post-9/11 order.

Trump has raised the possibility of a broad new U.S. partnership with Vladimir Putin’s increasingly authoritarian Russia and has even hinted at aligning with Syrian President Bashar Assad, which would amount to a dramatic reversal from years of the Obama administration calls for Assad’s ouster. Trump seems to calculate that their shared enemy in the Islamic State terror group is more important than shared values.

“When it comes to civil liberties, our country has a lot of problems, and I think it’s very hard for us to get involved in other countries,” Trump explained last July as Turkey was punishing tens of thousands of people seemingly unconnected to a failed coup attempt. “We need allies,” Trump said in a New York Times interview. “I don’t know that we have a right to lecture.”

When Barack Obama declared a new beginning with the Muslim world in a landmark speech eight years ago, he mentioned democracy six times and broached the subject of human rights on a dozen occasions. Trump has barely mentioned these as foreign policy principles, extolling instead deal-making, diplomatic and economic, and championing the fight against IS.

“Human rights will not be his top priority,” concluded Mustafa Alani, the director of the security and defense department at the Geneva-based Gulf Research Center.

Some believe the change will in the end be largely a matter of style, noting that Obama has fought jihadism all over the region as well. Aaron David Miller, a Mideast adviser under five American presidents, expects Trump to prove “risk- averse” and remain consistent with Obama’s own reluctance to interfere in other countries’ affairs, use military force, remain engaged in Iraq or get truly involved in Syria’s civil war.

But it’s clear that several long-standing allies in the Middle East are relishing an end to what they saw as moralizing rhetoric, confused signals and unfulfilled red lines, and favoring a Trump pivot to counterterrorism and security.

Egypt’s President Abdel Fattah el-Sisi is still waiting for a White House invitation, having been shunned by Obama for his bloody crackdown on the Muslim Brotherhood. Saudi Arabia is expecting a renewed push from Washington on its arch-rival Iran, instead of Obama’s more neutral stance and its accompanying criticism of the kingdom’s treatment of women and killing of civilians in Yemen. And Israel’s nationalist leadership has made almost a public celebration of Trump’s imminent arrival, confident that its grief for how it treats the Palestinians is over.

Here’s a look at how Trump’s policies could shake up the Middle East:

The U.S.-led campaign against IS, more than 60 nations strong, has lacked in Syria the one thing it needs most: a partner on the ground capable of reclaiming and holding territory, as the Iraqi government is doing in its areas. Widespread evidence of torture, chemical weapons attacks and even war crimes by Assad’s forces had made a partnership unfeasible to Obama and most of America’s foreign policy establishment.

Meanwhile, Russia’s intervention since September 2015 has dramatically shored up Assad’s position. If Assad and Putin now take on IS in its strongholds in northeastern Syria, it is less difficult to imagine Trump accepting perhaps a tacit partnership.

Trump has said Assad may be “bad” but the rebels fighting to topple him “could be worse.” He has said the U.S. has no idea who its allies in the country are and has appeared most concerned about containing the exodus of Syrian refugees, fearing they’ll spread terrorism.

Assad recently suggested the U.S. and Syria could be “natural allies.”

Such a shift would have consequences. America’s Sunni allies in the Persian Gulf will chafe at any outcome they see as strengthening the hand of Assad’s other main partner, Shiite Iran.

Years of contentious relations between Obama and Prime Minister Binyamin Netanyahu culminated last month in a U.N. Security Council resolution declaring Israel’s construction of settlements as illegal. Obama’s decision to not veto the resolution followed bitterness in Israel over the 2015 nuclear deal with Iran.

Trump has vowed to heal the wound, apparently by embracing parts of Netanyahu’s nationalist agenda. He has appointed a rightwing ambassador, vowed to move the U.S. embassy from Tel Aviv to Yerushalayim and spoken of renegotiating and even dismantling the Iran deal.

Whereas much of Obama’s disapproval of Netanyahu was expressed in moral terms, Trump has steered wide of any such thing.

Many fear overreach by Israel that could trigger a new Palestinian uprising. And some note the situation could turn if the confident Netanyahu ever provoked the mercurial Trump as he did Obama. “Within a year, they’ll be annoying […] each other,” predicted Miller.

THE GULF AND IRAN

If there is one authoritarian country unlikely to enjoy the fruits of Trump’s human rights-free foreign policy, it’s Iran. The president-elect regularly chastised Obama for agreements that provided new funds to a U.S.-designated terror sponsor and left it only several years away from potentially returning to nuclear weapons capacity.

Beyond the talk of a nuclear renegotiation, Trump also has promised to get American prisoners released and threatened to shoot Iranian boats out of the water if they provoke U.S. Navy vessels in and around the oil-rich Persian Gulf.

Ayatollah Ali Khamenei, Iran’s supreme leader, has said if the U.S. tears up the nuclear accord, “we will light it on fire.” But Iranian President Hassan Rouhani on Tuesday dismissed the possibility that Trump could undo the nuclear deal, likening it to turning a finished shirt back into cotton. The president-elect’s tough talk on the deal is “mainly slogans,” he said.

Officials in Saudi Arabia, Iran’s regional rival, are nonetheless pleased with a president who might focus more on Iran than its own human rights violations. Although its rights record routinely ranks among the world’s worst, Rex Tillerson, Trump’s choice for secretary of state, wouldn’t call the key U.S. ally a rights violator.

El-Sisi, Egypt’s general-turned-president, isn’t hiding his hopes in Trump: “There is appreciation (by Trump) for Egypt’s regional role and there will (be) more coordination with the United States going forward,” he said this week.

Government circles in Cairo widely see Obama as naive about the true intentions of political Islam and excessively idealistic about liberal democracy. Championing the popular protests of the 2011 Arab Spring, Obama urged the stalwart U.S. ally Hosni Mubarak to step down and welcomed the ascendancy of the country’s first elected president, Islamist Mohammed Morsi.

After el-Sisi led a 2013 coup replacing Morsi, Obama’s administration struggled for months over whether to call it a coup and later suspended some arms sales to Egypt. It has routinely criticized the government’s police brutality, mass trials of Islamists and the crackdown on liberal dissent, drawing charges from el-Sisi that the U.S. supports Morsi and other religious hard-liners.

Under Trump, “there will be a lot of capacity for less friction and more engagement,” said Michael W. Hanna, an Egypt expert at the New York-based Century Foundation.

But given Egypt’s dire economic condition and internal instability, el-Sisi may have little to offer a deal-oriented U.S. president in return. How important that turns out to be will help show whether the new American compass will truly be about the quid pro quo.