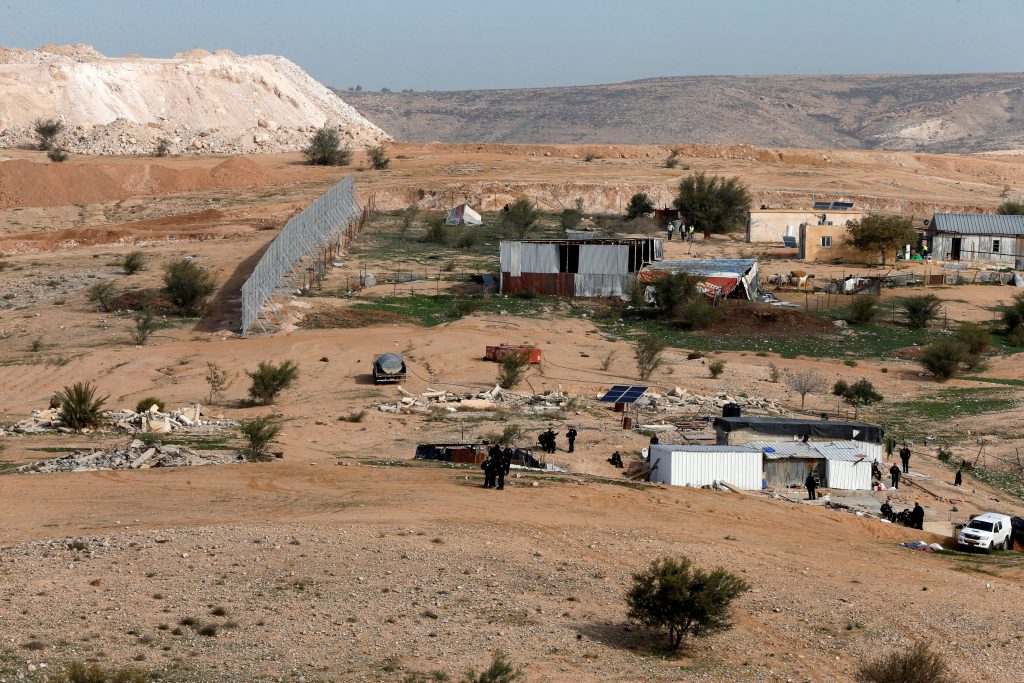 A police officer was killed and several people were wounded – including Arab MK Ayman Odeh – in riots that broke out Wednesday morning in the Bedouin town of Umm al-Hiran in the Negev. Also killed was the terrorist who undertook the attack. Another police officer was injured as well.

The deaths were the result of an apparent attempted car-ramming attack against a group of police officers, who were trying to keep the peace in the face of riots by residents, as authorities sought to demolish illegal structures. A jeep sped in the direction of a group of police officers, whereupon officers opened fire on the vehicle, killing the driver and a second individual. One rioter was injured and taken to a Be’er Sheva hospital for treatment. Police said that the driver was a member of an Islamist group, but this was denied by family members.

The buildings that were demolished were among thousands for which demolition orders have been issued. The buildings were constructed on state land, without permits. Residents attempted to stop the demolitions, throwing rocks and firing shots at workers. Police responded by firing rubber bullets at the rioters.

United Arab List head Odeh was lightly injured in the riot, and was taken to a hospital for treatment. Speaking on Army Radio, he said that the government had “acted traitorously” by sending in forces to demolish the buildings. “We were negotiating with them until midnight, following a court decision that talks should proceed with residents before a final decision was made,” he said. “Those people were there legally.”

Police said that Odeh and other Arab politicians and activists had organized the riots, but Odeh denied this. “We did no such thing,” he said, adding that an increase in demolitions of illegally built homes in the Arab sector in recent days was connected to the police investigation into alleged scandals Prime Minister Binyamin Netanyahu is involved in. “The deeper the investigation, the higher the level of incitement against Arabs,” Odeh said, the better to deflect Israelis’ attention from Netanyahu’s legal problems.

Public Security Minister Gilad Erdan said that Wednesday was “a difficult morning for all of us. I hope that this does not signify a worsening of relations with the Arab sector, but if it does, it will be thanks in no small part to the activities of Aymen Odeh today.” The demolitions in the Arab sector, said Erdan, were completely legal, and backed up by orders of the High Court, just like in Amona and other places in Yehudah and Shomron. “Police cannot pick and choose where to enforce the law. That’s the way it is in a country with laws. Odeh does not believe in the rule of law, and seeks to continue to increase tensions between Jews and Arabs.”