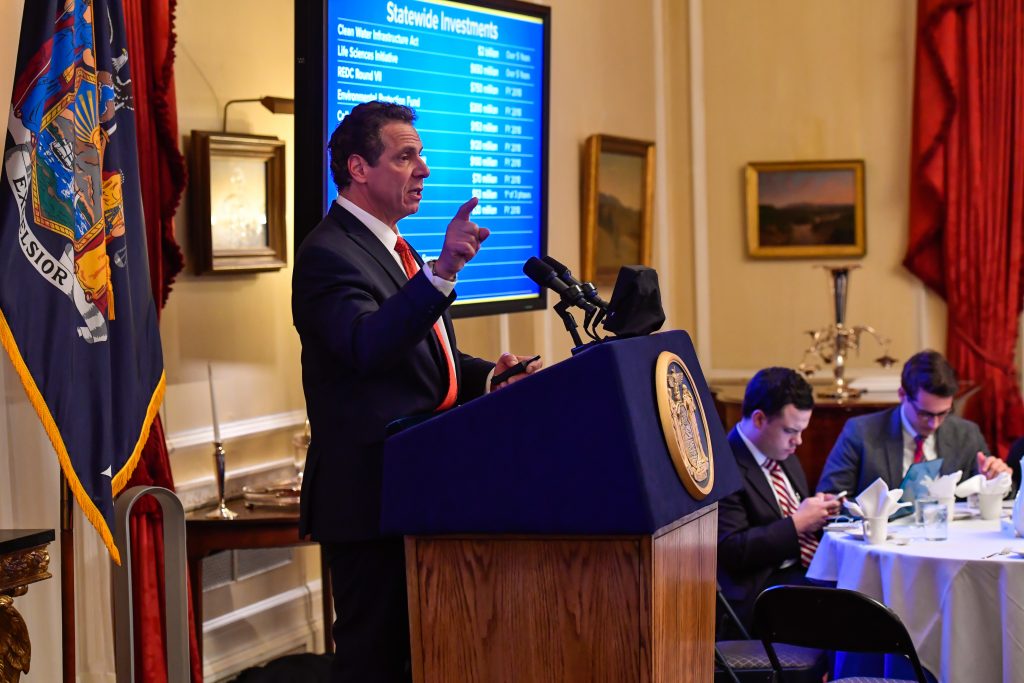 Big-ticket items in the budget plan include Cuomo’s $163 million proposal to make tuition at state colleges and universities free for students from families making $125,000 a year or less, $2 billion over five years for pipes and water quality and his plans to boost education spending and expand a child care tax credit.

“This is about helping the middle class,” Cuomo said during a Tuesday night budget briefing at the governor’s mansion. “They’ve gotten hit on every front, and the government that’s supposed to help them has become disconnected.”

Other highlights: $1 billion in new spending on public education, funding for the first phase of a new trail traversing the state and a plan to require counties to look for cost saving measures intended to reduce local property taxes.

The budget also contains some non-fiscal initiatives. They include proposals to authorize Uber and Lyft to expand outside New York City and to end the state’s practice of prosecuting and incarcerating nonviolent 16- and 17-year-old offenders as adults.

Lawmakers will spend the next several weeks studying the $152 billion budget before making their own recommendations. Cuomo and the Legislature hope to approve the budget before April 1, the start of a new state fiscal year.

“The college tuition price, it sounds fantastic,” said Senate Leader John Flanagan (R-Long Island). “But, again, how do you pay for it? What does it mean for private college and universities?”

Cuomo called his tuition plan “the best $163 million in the budget” and said it could serve as a national model.

The next state budget will be tighter than last year’s, with a projected $3.5 billion deficit that must be closed.

“We want to make sure we have the ability to pay for these things,” said Assembly Speaker Carl Heastie (D-Bronx).

Lawmakers are likely to take a close look at changes in the budget intended to address government corruption. Cuomo’s budget would tighten campaign finance rules and includes two proposed constitutional amendments that, if approved by voters, would impose term limits on lawmakers and statewide officials and restrict lawmakers’ outside income. Both ideas face strong opposition in the Legislature.

The budget does not make significant changes to taxes and continues an already approved plan to lower income taxes for New Yorkers with annual incomes between $40,000 and $300,000.

The spending plan also does not contain contingencies for the possibility of federal funding cuts to Medicaid, housing or other programs pushed through by President-elect Donald Trump and Republicans in Congress.

“There is no contingency plan for eliminating $3 billion in the budget,” he said.