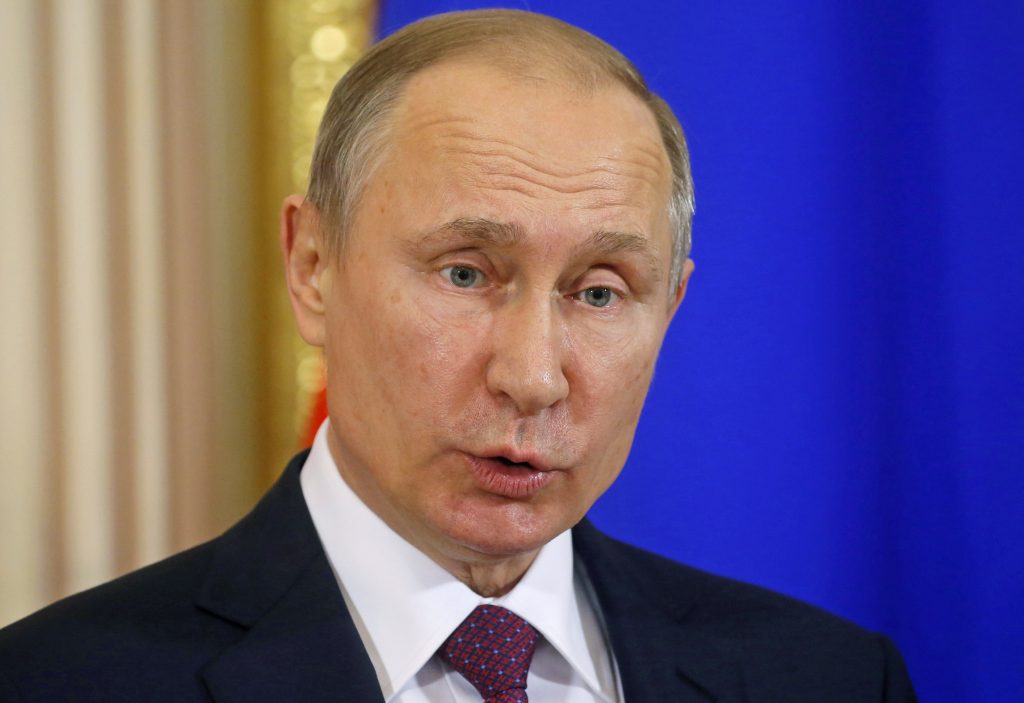 Russian President Vladimir Putin took a parting shot at the Obama administration Tuesday, accusing it of trying to undermine President-elect Donald Trump’s legitimacy with fake allegations and “binding the president-elect hand and foot to prevent him from fulfilling his election promises.”

In his first public remarks about an unsubstantiated dossier outlining unverified claims about Trump, Putin dismissed the material as “nonsense.”

“People who order such fakes against the U.S. president-elect, fabricate them and use them in political … have no moral restrictions whatsoever, and it highlights a significant degree of degradation of political elites in the West, including in the United States,” said Putin.

The statements by Putin and Lavrov reflected the Kremlin’s deep anger at President Barack Obama’s administration in a culmination of tensions that have built up over the crisis in Ukraine, the war in Syria and allegations of Russian meddling in the U.S. election.

Putin said the allegations were part of efforts by the Obama administration to “undermine the legitimacy of the president-elect” despite his “convincing” victory.

Asked about Putin’s remarks, White House press secretary Josh Earnest said it “was not the first time the intelligence community has had some uncomfortable things to say about Russia.”

“These are the kind of things I’m sure the Russians would rather not to hear, but ultimately, and this is something that the next administration is going to have to decide, there’s a pretty stark divide here,” he added.

Putin voiced hope that “common sense will prevail” and Russia and the United States will be able to normalize relations once Mr. Trump takes office Friday.

“I don’t know Mr. Trump,” Putin said. “I have never met him and I don’t know what he will do on the international arena. I have no reason whatsoever to assail him, criticize him for something, or defend him.”

Putin ridiculed those behind the dossier for alleging Russian spy agencies collected compromising material on Mr. Trump when he visited Moscow in 2013.

“He wasn’t a politician. We didn’t even know about his political ambitions,” Putin said at a news conference. “Do they think that our special services are hunting for every U.S. billionaire?”

Putin said Mr. Trump’s foes are ready to go as far as to “stage a Maidan in Washington to prevent Trump from entering office” — a reference to the alleged U.S. role in organizing protests in the Ukrainian capital’s main square, Maidan, that forced the nation’s Russia-friendly president from power in 2014.

“People who are doing that are inflicting colossal damage to the interests of the United States,” Putin said. “How can you do anything to improve U.S.-Russian relations when they launch such canards as hackers’ interference in the election?”

Russia and the United States can reach common ground on nuclear arms control and other issues if each country proceeds from its national interests and shows respect for the other side, Foreign Minister Lavrov said.

He voiced hope that Trump’s team will consist of pragmatic people “who will not engage in moralizing and will try to understand the interests of their partners just as they clearly uphold their own interests.”

Lavrov denounced the foreign policy of the Obama administration and its allies as “messianic” attempts to impose Western values on the rest of the world, which has led to instability and conflicts in the Middle East and elsewhere.

He said Moscow is inviting representatives of the Trump administration to talks Monday on Syria in Kazakhstan — discussions brokered by Russia, Turkey and Iran. He voiced hope that Russian and U.S. experts could discuss fighting terrorism in Syria.

Asked about Trump’s recent remarks in which he indicated he could end sanctions on Russia for its 2014 annexation of Crimea in return for a nuclear arms reduction deal, Lavrov said Moscow was ready to hold nuclear arms talks with Washington.

Lavrov noted he didn’t see Trump’s words as an offer to cut arms in exchange for canceling the sanctions, rather as an expression of readiness to look at reviewing the sanctions while engaging in negotiations on arms control, among other issues.

Like Putin Lavrov rejected allegations of Russian meddling in the U.S. election as “absurdities” and “fakes” intended to hurt Trump.

He said U.S. intelligence agencies have failed to produce any evidence to back those claims, adding that officials who engaged in the effort “deserve to be fired, as they receive their salaries for nothing.”

Lavrov described the allegations of Russian election meddling in the U.S. vote as the final “spasms of those who realize that their time is coming to an end.”

“The time of foreign policy demagogues is over, and, feeling hurt, they fabricate all kinds of fakes,” he said. “First, officials leak fakes to the media, then media start spinning them and, finally, officials comment on them as facts.”

Lavrov also accused U.S. officials of repeated attempts to recruit Russian diplomats in the U.S. as spies, including a deputy chief of mission.

In her final speech as U.S. ambassador to the United Nations, Ambassador Samantha Power accused Russia of pursuing a policy of “deny and lie” to raise doubts about its actions in Syria and Ukraine, to undermine international institutions and, citing U.S. intelligence analysis, repeated allegations that Moscow used a well-crafted, multipronged attack to disrupt the U.S. election through hacking and misinformation.

“I know some have said that this focus on Russia is simply the party that lost the recent presidential election being ‘sore losers,’“ Ambassador Power told the Atlantic Council, a Washington think tank, “but it should worry every American that a foreign government interfered in our democratic process.”

She said the U.S. must reassure its allies that Russia will pay a price for interfering in other nations’ sovereign affairs, and that means maintaining sanctions on Russia for its actions in Ukraine as well as meddling in U.S. politics.