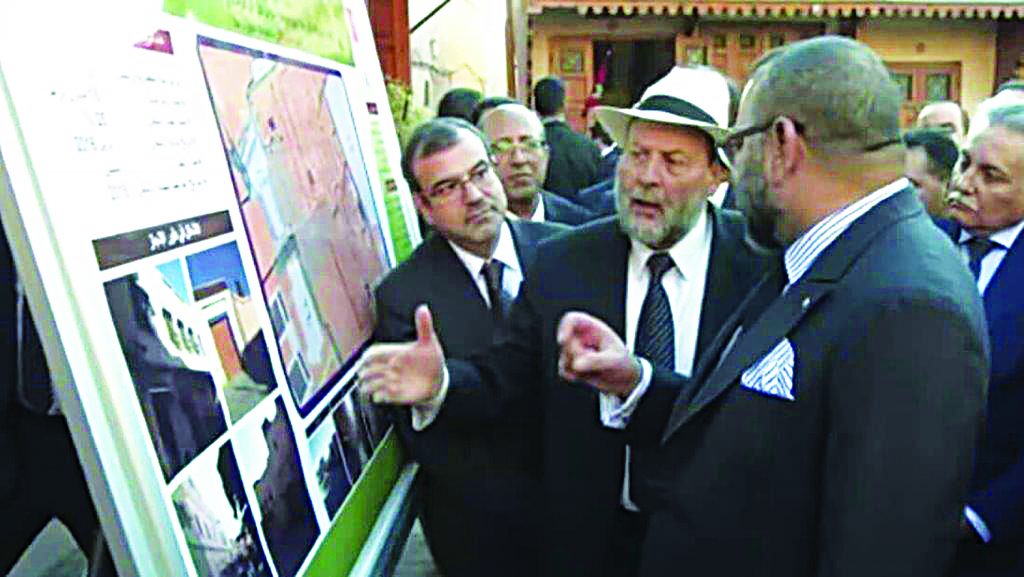 Against a backdrop of efforts by Morocco’s King Mohamed VI to preserve Jewish heritage in his country, the monarch has ordered that streets of Marrakech’s mellah, or Jewish Quarter, should revert to their original names.

The city once boasted the country’s largest Jewish population, estimated at 25,000 in the 1940s. The community declined dramatically in the 1960s and ’70s due to mass emigration to France, Israel and the United States. Thirty years ago, a movement began to decrease the heavy French influence in the country, and the names of many neighborhoods and streets were changed to Arabic. Marrakech’s mellah was one of many areas that were affected by the trend.

During a visit to the city a few weeks ago, the king was given a tour of renovations that have been made in the Quarter. The day after, he issued a directive renaming the neighborhood, which had been called Essalam, “El Mellah,” and told local officials to begin restoring street names to their original Jewish ones.

The move was the result of years of advocacy by the president of Marrakech’s Jewish community, Mr. Jacky Kadosh.

“Almost everybody in the neighborhood is very happy about it, the non-Jews as well. These are the names they grew up with,” he told Hamodia. “When I became president of the community 13 years ago, I said that b’ezrat Hashem, I want to bring back the old names of the mellah, and now, baruch Hashem, it finally happened.”

In recent years, the Moroccan government has made historic preservation of Jewish sites a priority. Last year, a major project to restore and protect cemeteries around the country was completed. In December, the king attended a rededication ceremony at the Ettedgui Synagogue. Restoration efforts for Marrakech’s mellah were estimated to cost $20 million.

For years, Mr. Kadosh has been lobbying local officials to restore the neighborhood’s original Jewish names, but to no avail. The day following the king’s tour of the mellah, the community leader was called to meet personally with the monarch at his hotel.

“The day before, I kept thinking that I wanted to ask the king about the streets, but you don’t say something to the king unless he asks you first,” said Mr. Kadosh.

At the meeting, the king said that he had heard of the issue of street names and told Mr. Kadosh that he is instructing the city’s governor to initiate the process of changing them immediately.

“The king asked why I did not bring it up the day before and I said that there were so many things to show during the tour that I did not have a chance, but [the king] told me, ‘Don’t hesitate to tell me the things you need for your community. I am here to serve my people; no difference if they are Muslims or Jews, they are all my people.’”

The term “mellah,” Arabic for salt, is used to refer to all of Morocco’s walled Jewish quarters. There are multiple explanations for the name, but many say it is based on early ghettos being constructed on top of salt marshes. Today, Marrakech has fewer than 200 Jews.

Morocco, which maintains a heavy European influence even decades after decolonization, has largely resisted the wave of Islamist fundamentalism that has swept much of the Arab world. While only an estimated 3,000 members of its Jewish population, numbered at over 250,000 in 1948, have remained, the community is an affluent and influential one.

Morocco’s King Mohammed VI is outspokenly supportive of his country’s Jews and has dedicated significant funding to protecting their institutions.

Morocco is a constitutional monarchy, but the king maintains significant power. Mr. Kadosh said that maintenance of the monarchy has been the key to sustaining the country’s unique path.

“The fact that it stayed a kingdom saved Morocco from what is going on in the rest of the Arab world. It is a real meluchah of chessed. Even our neighbor Algeria has terrible problems now, but we still have a booming tourist industry even from Israel.”