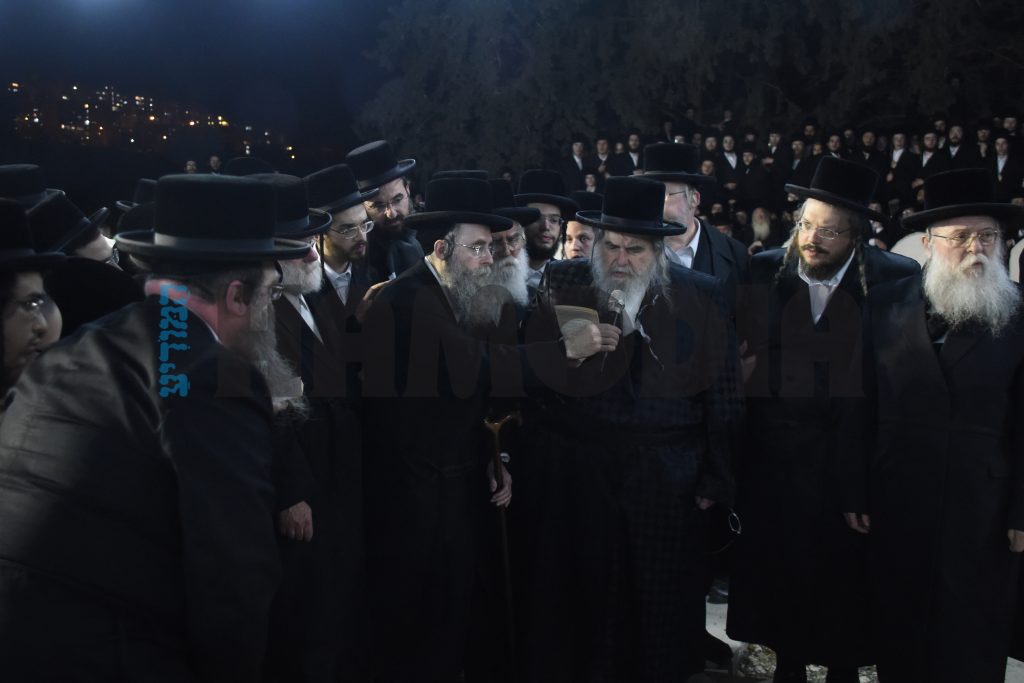 The sad news came from Yerushalayim on Monday afternoon, about the passing of Rebbetzin Miriam Rokeach, a”h, the Bilgorayer Rebbetzin, at the age of 96. She was descended from a prestigious lineage, and is the mother of the Belzer Rebbe, shlita.

The Rebbetzin lived a life of holiness, nobility and sterling middos. She was the Rebbetzin of Harav Mordechai of Bilgoray, zy”a, the son of Harav Yissachar Dov of Belz, zy”a. Masses accompanied her on her final journey, which began at the Belzer beis medrash in Yerushalayim, led by the Rebbe, shlita. She was buried in the Machzikei Hadas section of Har Hamenuchos.

Rebbetzin Miriam was born on 12 Sivan 5681/1921 in the city of Chust, to Harav Tzvi (Hershel) Glick, Hy”d, the son of Harav Yaakov Yitzchak, zt”l, Av Beis Din of Shegshvar, and her mother, Rebbetzin Golda, Hy”d, the daughter of the famed Harav Yechizkiyahu Greenwald, Hy”d, of Chust. He was also one of the leading yoshvim and Rabbanim in the holy court of Belz during the time of the Rebbes, Harav Yehoshua, Harav Yissachar Dov, and Harav Aharon, zechusam yagen aleinu.

Her father, Reb Tzvi, zt”l, was a talmid chacham and masmid, and one of the eminent talmidim of the Keren L’Dovid, zt”l, and received semichah from him. He was the one who suggested the shidduch to his brother, Harav Yaakov Yechezkiyah Greenwald, zt”l, a brother of the Arugas Habosem, zt”l. Rav Yaakov Yechezkiyah Greenwald was an ardent Belzer Chassid. He was honored at the tischen in Belz by being seated among the eminent Rabbanim. He was also honored with an aliyah each Shavuos. Many years later, he merited to have the Belzer dynasty resurrected and perpetuated through his granddaughter, the daughter of his son-in-law Rav Tzvi, when her son became the Rebbe, shlita.

After the war, during which the Rebbetzin’s parents and many relatives perished, she resolutely picked herself up from the ashes and traveled to Eretz Yisrael.

In Shevat 5707, she became engaged to the Bilgorayer Rav. Harav Aharon of Belz remarked when speaking of the kallah’s yichus: ‘The Arugas Habosem was not only a Chassid of my grandfather Harav Yehoshua, and my father, but he also submitted himself to them like a talmid mamash.’ The wedding took place on Friday, 6 Nissan, 5707. The Rav of Petach Tikva was honored with Siddur Kiddushin, and Harav Aharon of Belz read the kesubah and recited six of the brachos. The Shatzer Rebbe, zt”l, who made the trip from London for the simchah, was honored with the final brachah.

Chareidi Yidden in Petach Tikva were very uplifted by the simchah, and they hoped and prayed that the joy would leave an impression on the city’s residents for many days to come. Belzer Chassidim all over participated in the simchah by holding seudos in the shtieblach.

On 25 Cheshvan 5710, her husband, the Bilgorayer Rav passed away, leaving ybl”c his only son, a two-year old orphan, and the only descendent of the Belzer dynasty, the Rebbe, shlita. She kept herself strong, and with tremendous fortitude, continued in the path of her revered husband, whose avodas ha’kodesh she had supported, and maintained a strong bond with Belz, becoming Imah shel Malchus, raising the Rebbe, shlita.

The Belzer Rav, Harav Aharon, took the orphaned boy under his wing, and cared for him like a father. He was mechanech him with fatherly compassion as though he was his child. This lofty period continued until the passing of the Rebbe on 21 Av 5717.

The Rebbetzin always lived near her only son and worried about him constantly. Despite her eminent status, she was extremely modest and humble, and she was deeply revered for her sterling middos that emanated from her lofty soul.

Fifteen years ago, she moved into the Rebbe’s home in Kiryat Belz, Yerushalayim. The family and her grandchildren were always there for her, doing everything they could to make her comfortable. They also imbibed from her spiritual wellsprings and values of yiras Hashem, modesty and middos that she brought with her from previous generations, and from her prestigious forbears.

She experienced many trials and tribulations in her life, but she was encouraged by, and offered encouragement to, others, and displayed a strong faith in Hashem. She worried about her family to no end.

She also davened fervently for the revival of the Belzer dynasty, as she watched the establishment of Kiryat Belz and the Chassidus, under the leadership of her son, who succeeded Harav Aharon of Belz, zy”a.

She closely followed the progress as Belz grew and thrived, and reaped much nachas from it. Of all the Belzer institutions, she had a special place in her heart for the kiruv mosdos. She always aspired to reach out to our errant brethren and draw them back to the eternal faith of Am Yisrael. She was overjoyed when she saw her son, the Rebbe, shlita, working with these Jews and bringing them into the fold in the various frameworks of Belz for baalei teshuvah and kiruv.

She was recently hospitalized in Shaare Zedek Hospital in Yerushalayim. On Monday afternoon, her condition deteriorated and her family hastened to her beside. They recited Nishmas, Shema Yisrael and pesukei hayichud as she returned her soul to its Maker.

The news spread quickly among Belzer Chassidim all over the world, who were grieved to hear of the loss. The levayah departed from the Belzer beis medrash in Kiryat Belz, headed by her son, the Rebbe, shlita.

It continued to the Shamgar funeral home, and from there to Har Hamenuchos, where she was buried in the Machzikei Hadas section.