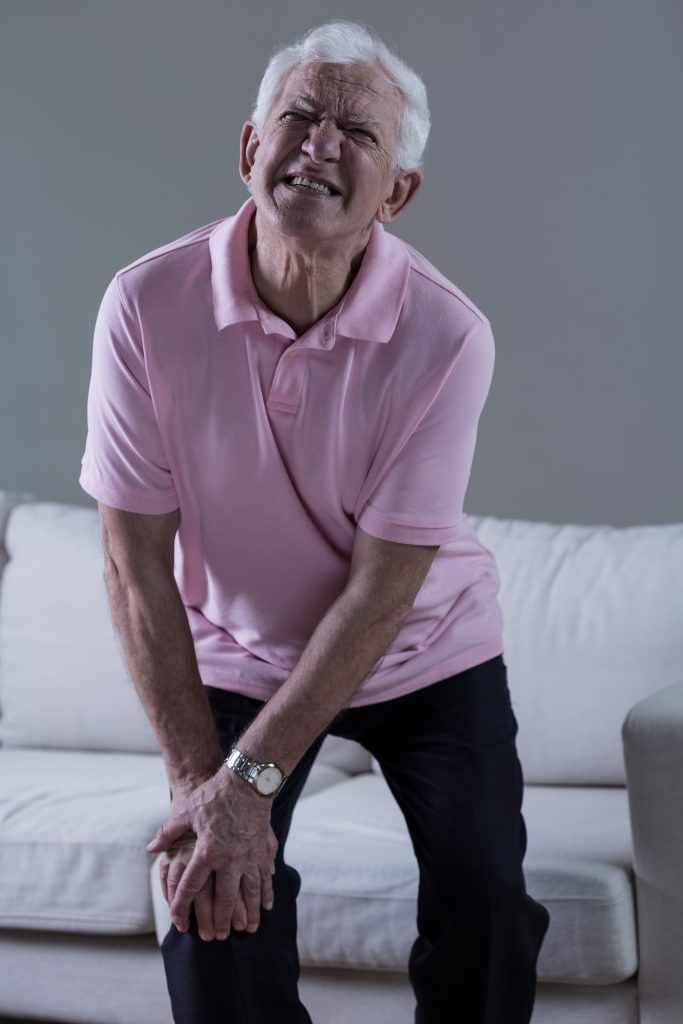 The first hint of trouble came just a week after I had knee-replacement surgery. I was rearranging the bedclothes over my new knee when I realized the down comforter felt like lead, and lifting it felt like doing a bench press.

That seemed curious, but I was so bent on getting the new knee to work properly that I ignored my sore arms as well as a stubborn stiffness in my neck and hips. Physical therapy was my focus, and the goal was to get back to my favorite pastime – rowing. It had kept me in shape for years, and I was missing early mornings on the Potomac.

Months later, I still hadn’t picked up an oar. Instead, I’d endured anemia, weight loss, fevers, stiffness and sometimes excruciating pain in my hips and legs. I felt as if I’d been hit by the flu, or maybe a truck. Getting out of bed was painful, and getting into a boat again seemed an impossible task.

The culprit: polymyalgia rheumatica, or PMR, an autoimmune disease that spreads painful inflammation through most of the body’s joints.

Never heard of it? Neither had I. Yet it strikes many older Americans, usually in their 70s and 80s, more women than men. The afflicted are more often of Northern European extraction, indicating to researchers that genetics may be at work.

Fortunately, PMR responds quickly to the steroid drug prednisone. The important thing is to recognize, not ignore, the symptoms and seek help. I felt better within a day of finally seeing my doctor, being diagnosed and taking my first dose of prednisone. In most cases, the condition can be cured, although slowly over months, sometimes years. And in some situations it can be complicated by a more serious disease.

Why and how PMR strikes is mysterious, although researchers are looking at viruses or stress as triggers for the disease. But undeniably, it is associated with aging, and particularly the aging immune system.

With the first wave of baby boomers heading into their 70s this year, America’s elderly population will swell, and doctors think there will almost certainly be more cases of PMR.

Basically, polymyalgia rheumatica tricks the immune system into attacking its own body – sending antibodies and immune cells into the hundreds of fluid-filled sacs called bursae that lie throughout our joints and surrounding soft tissue. In the healthy body, those sacs – some no wider than a dime, others the size of a silver dollar – keep our joints moving smoothly. But when inflamed by PMR, they cause pain and stiffness. PMR also impedes the bone marrow’s ability to make red blood cells, causing anemia.

Such an inflammatory response is like a complex cascade, according to Marcy O’Koon Moss, director of consumer health for the Arthritis Foundation, which counts PMR among more than 100 diseases it focuses on.

“It’s not one thing that happens. The cells involved signal each other and communicate,” she said.

Many people stricken with PMR confuse their symptoms with aging and just soldier on. But as the disease progresses and becomes more debilitating, most figure that something beyond old age is at work.

Phil Ringo, 74, of Haverford, Pennsylvania, couldn’t imagine what was wrong four years ago when he began feeling sore and ill.

“I thought I’d gone from a pretty vigorous 70-year-old to an old, old man,” he said. “Grandchildren were saying, ‘What’s wrong with Papa?’ ”

Unable to get out of a chair or into a cab without a struggle, he got no answers from his doctors. And when he tried for an appointment with one of the nation’s top diagnostic clinics, “they basically said, ‘You’re an old guy.’ ” Ringo said. ” ‘ Just get used to it.’ ” He was finally diagnosed and treated after a friend with the disease convinced him to see a rheumatologist.

“A definitive test does not exist for PMR,” said rheumatologist Rebecca Manno, a Johns Hopkins School of Medicine faculty member and researcher. “And there are other conditions that mimic PMR,” such as rheumatoid arthritis, various infections and even some forms of cancer.

So the diagnostic process can be torturous. Leslie Kermath, 70, of Whitefish, Montana, spent almost a month undergoing tests before her doctor felt confident that PMR was causing her pain, stiffness and fever.

Along the way, she got antibiotics for an existing urinary tract infection, was sent to the hospital for a chest X-ray and a CAT scan after a test flagged a possible blood clot. Later she had another CAT scan of her abdomen and pelvis, because her hips were terribly painful. A Lyme disease test came back negative.

Eventually, her blood tests, which showed increasing levels of inflammation, plus her symptoms and age, nailed the diagnosis for Kermath’s doctor, who started her on prednisone.

“How many women of Caucasian origin, who are older, think they’re just aging and can’t do everything they used to – when they actually have this disease?” said Kermath, who is an avid hiker.

Most doctors suspecting PMR order several blood tests, almost always two that look for inflammation: the erythrocyte sedimentation rate, known as the ESR test, and another for CRP, or C-reactive protein. Doctors also check for antibodies associated with rheumatoid arthritis, to rule out that disease.

When I finally dragged myself to my internist three months after my symptoms showed up, she immediately suspected PMR. Given my age – 73 – my symptoms and lab results showing considerable inflammation and anemia, she started me on prednisone and sent me to a rheumatologist. After eight weeks of prednisone, my inflammation numbers had fallen to near normal and my anemia was under control.

My rheumatologist has reduced my steroid dose, but only very gradually because rebounds do happen. The hope is that I can be steroid-free – a sign of a cure – sometime in 2017.

“Treating PMR is one of the more gratifying parts of my practice,” said my doctor, Joseph P. Laukaitis. “In my experience, about 95 percent of patients fully recover.”

For a PMR patient, prednisone feels like a miracle drug because it so quickly attacks inflammation and banishes the pain and stiffness. But in fact, prednisone is “wonderful, wicked” in Manno’s words. The side effects that some people experience are considerable: a thinning of the bones (already a problem for many older women), high blood pressure, weight gain, high blood sugar, insomnia and a distinctive addition of facial fat known as “moon face.”

Most patients who take prednisone for PMR will also be prescribed a drug to slow bone loss, and that medication, too, has side effects.

Although diagnosing PMR can be difficult, doing so is crucial because a much more serious disease, giant cell arteritis, strikes about 10 to 20 percent of people with PMR. Giant cell arteritis causes inflammation and damage to blood vessels in the head and elsewhere. Untreated, it can cause blindness, stroke, even death. PMR patients can expect their doctors to look for symptoms of GCA: severe headaches, tender scalp, jaw pain and blurred vision.

Any one of those can indicate that the arteries of the head are inflamed. The diagnosis often requires a biopsy of one of the arteries in the scalp to confirm inflammation. Again, prednisone is the treatment.

Much of today’s research into PMR and GCA looks for alternatives to prednisone.

Biologics – drugs made from living organisms – hold promise, because some can “inhibit an inflammatory response as it picks up steam,” the Arthritis Foundation’s O’Koon Moss said. “It’s like interrupting a chain reaction.”

“There are also promising clinical trials of drugs that treat rheumatoid arthritis and have FDA approval for that. And they may be effective for PMR,” Manno said.

Until other drugs become available, prednisone will remain the preferred treatment despite all its of downsides.

As I face months of treatment for polymyalgia rheumatica, taking smaller and smaller doses of prednisone each month, I hope to avoid remission and eventually regain my strength. Exercise is key, as it so often is when ill health strikes, so you’ll find me on the stationary bike or walking or, if not rowing, at least beginning to build up stamina on the indoor rowing machine.