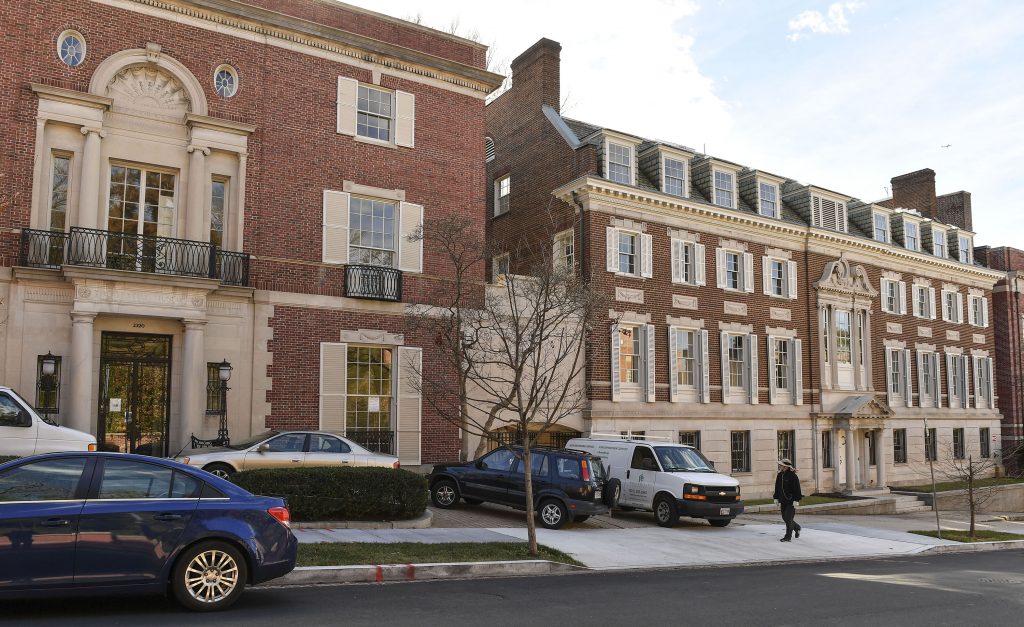 In the coming days, Sally Berk will be able to say that she lives in the same Northwest Washington neighborhood as Barack and Michelle, Jared and Ivanka, and a billionaire named Jeff.

What’s another president in the ’hood when five others have already resided in Kalorama, Washington’s very own version of Beverly Hills?

Can you blame the soon-to-be first daughter for wanting to live a 13-minute, chauffeur-driven glide path to her father at the White House? And where else can a tech magnate find a 27,000-square-foot crash pad just 1.8 miles from his new media company?

“We’re just so used to it,” said Berk, who 36 years after moving to Kalorama is accustomed to the motorcades, Secret Service retinues and hovering helicopters that come with sharing sidewalks with Washington royalty.

Yet, despite the neighborhood’s history as a turret-happy crib for the country’s elite, it is not every day that three of the world’s most powerful names decide, at virtually the same moment, that Kalorama is the place for them.

Jeff Bezos, Amazon’s founder and owner of The Washington Post, became the latest A-lister known to plant a flag in the neighborhood, paying $23 million in cash for a 10-bedroom mansion.

A bit more than four blocks away, Ivanka Trump and Jared Kushner and their three children are moving into a six-bedroom, five-fireplace manse that was listed last year for a relatively reasonable $5.5 million.

Around the corner, behind a newly constructed Secret Service guard booth on Belmont Street, President Barack Obama and first lady Michelle Obama are set to relocate to their post-White House rental — a nine-bedroom, 8.5-bathroom house owned by Joe Lockhart, who served as press secretary to President Bill Clinton.

“Famous people have always lived here,” said Penn Lupovich, 81, a retired doctor, as he stood outside his house on Tracy Place, defiantly nonchalant about living across the street from Ivanka Trump’s new address.

No, Lupovich said, Kalorama’s residents are not holding meetings to prepare for the arrival of their new neighbors. No one, he insisted, is sweating the prospect of security checkpoints and hordes of gawkers.

“It’s Washington — if you don’t like it, don’t live here,” Lupovich said of his neighborhood of 42 years. “I came here to change the world, and that’s the way it has always been. That’s what we do here. Change the world!”

A majestic mix of mansions, townhouses, apartment buildings and embassies northwest of Dupont Circle, Kalorama is like any other neighborhood, residents insist — albeit one that requires a minimum of several million dollars to buy into.

The neighborhood includes no place to buy a cup of coffee, not to mention eggs or a quart of milk, though the bare essentials can be acquired at the 7-Eleven on Wyoming Avenue NW, a bit less than a mile from the Obamas’ place.

Sure, the neighborhood’s residents may be a bit more prominent — a former congressman over here, Bloomberg Media’s chief executive over there — but they want trash picked up and streets swept just like anyone else.

“We have potluck dinners; someone says, ‘You bring the dessert, I got the dead cow on the grill,’” said Mario Castillo, a lobbyist who has lived on Belmont for 20 years. “To me, they’re all just neighbors, and then they happen to be the Jeff Bezoses, the Kushners and the Obamas.

Jim Bell, a Sotheby’s International real estate agent who describes himself as “the king of Kalorama,” predicts that the neighborhood will regain its quiet rhythms after an inevitable spasm of excitement greets the arrival of the famous new residents.

“Ted and Vickie were neighbors of mine,” Bell said, referring (of course) to the late Sen. Edward Kennedy and his wife. “Donald Rumsfeld lived here……., and then once in a while you’ve got someone who gets more press. And then it dies down. Everyone says, ‘Enough is enough.’ At the end of the day, they’re just people. They have dogs and kids and they go to sleep at night.”

A sloping landscape of rolling knolls, the neighborhood in the late 1700s was defined by a single estate, known as Belair, which was built by a local commissioner before it was taken over by a diplomat who renamed it Kalorama, the Greek word for “fine view,” according to the D.C. Office of Historic Preservation. Thomas Jefferson was a regular visitor.

After the Civil War, as Washington’s population grew, developers began dividing Kalorama’s land and constructing massive homes that evoked a variety of architectural styles, from Victorian-style villas to Beaux-Arts apartment houses and Colonial and Federal mansions.

Before Obama, Woodrow Wilson was the only president to move to Kalorama immediately after leaving the White House. At varying points, William Howard Taft, Warren G. Harding, Franklin D. Roosevelt and Herbert Hoover also resided in the neighborhood.

Wilson’s house, now a museum, is on S Street, next door to the mansion purchased by Bezos, a sale that was cheered by residents who feared that the property — the former Textile Museum — would be turned into condos.

“Bravo!” someone shouted at a neighborhood meeting last week after Bezos’s architect announced that the property was bought by a family who intended to restore it as a home, according to the Current newspaper.

But the architect, Anthony “Ankie” Barnes, declined to identify the buyer, said David Bender, chair of the Advisory Neighborhood Commission, who is not unaccustomed to such secrecy.

No one from the president’s orbit, for example, notified the ANC that several guard booths would be built outside the house on Belmont — the kind of exterior construction that the commission typically approves.

“We heard nothing,” Bender said.

Nor has he received many complaints, though parking is a concern, as is a recent uptick in the presence of reporters and photographers in the neighborhood (“Absolutely not! We don’t talk about our neighbors!” a woman walking her dog near the Kushner-Trump house said when asked about their impending arrival).

Councilman Jack Evans, D-Ward 2, whose district includes Kalorama, said the Secret Service is planning to install gates on both ends of the portion of Belmont that encompasses the Obama residence.

“It will certainly be safe over there,” he said.

Castillo said a representative from the White House and Secret Service recently visited him to explain where the roadblocks would be set up and how residents would receive visitors.

“I have gardeners, and what about the paperboy? How do we make arrangements to get him in and out?” he said. “They were very professional. It’s not going to be as draconian as you might think.”

When he arrived in Kalorama in 1996, Castillo recalled, his neighbor sent over a housekeeper with a note on a silver tray that read, “Welcome to the neighborhood.” Castillo plans no such greeting for the Obamas, preferring to allow them a respite after “eight years of a hectic life. I have the sense that they are a little exhausted.”

Lupovich said Kalorama is more transient than it was when he first moved in, and that he doesn’t know too many of his neighbors anymore. He’s not expecting to interact with Kushner or Ivanka Trump, though he has already benefited by their presence, wandering across the street to hire their house painter to put a new coat on his living room (Ivanka ordered the rooms in her house to be painted “simply white,” the painter said).

As for Obama, the retired doctor said he plans to extend an invitation to both the outgoing president and the new president to join him in his living room for what he hopes would be consequential policy discussion.

“I want the president and Don Trump to come over and talk health care,” he said. “That’s the way we did it in the old Washington.”