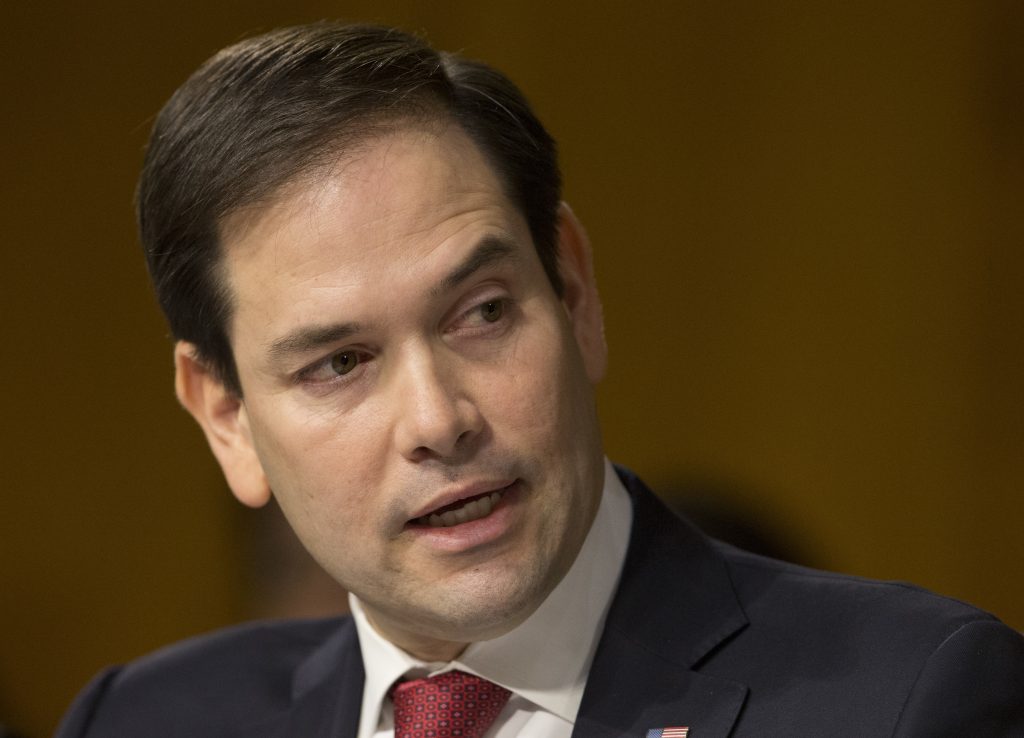 For a guy who didn’t want to be in the Senate anymore last year, Florida’s Marco Rubio is certainly making a tall glass of lemonade out of the lemons he got running for president in 2016. With a single hearing in the Senate Foreign Relations Committee this week, Rubio went from being the Republican Most Likely to Miss a Vote, a distinction he earned on his way to losing the GOP nomination, to being the Republican Most Likely to Hold Donald Trump’s Feet to the Fire. It’s a role that holds both risks and immense power. That, for Rubio, could be more important than anything.

The hearing, of course, was to consider the nomination of Rex Tillerson to be Trump’s secretary of state. Although Sen. Jeff Sessions’ hearing to be attorney general was expected to have the most fireworks of the week, the Tillerson hearing went off-track as soon as Rubio began grilling the former Exxon Mobil CEO about the reams of accusations against Russian President Vladimir Putin of widespread corruption and human rights abuses.

“Is Vladimir Putin a war criminal?” Rubio asked Tillerson. “I would not use that term,” Tillerson said, carefully. “Are you aware that people who oppose Vladimir Putin wind up dead all over the world? Poisoned, shot in the back of the head? Do you think that was coincidental?” Rubio later followed up. When Tillerson said he’d need more information to make up his mind about Putin, whom Tillerson knows well enough to receive an award from, Rubio concluded, “None of this is classified, Mr. Tillerson, these people are dead.”

Critics of Rubio’s have panned his performance as political theater, but the single swing vote he holds on the committee deciding Tillerson’s fate is very real. Real, too, were Tillerson’s answers to Rubio and others’ questions, when he seemed to still be a multinational CEO hunting oil and profits, and less a potential diplomat advancing American values.

Rubio wouldn’t say after the hearing if he would support Tillerson or not. It’s possible that he could extract some concessions from the incoming administration to vote for Tillerson, or he may oppose him altogether. But the fact that a question exists at all marks a new era for Rubio in the Senate.

It turns out that Rubio didn’t have to win the White House for his vote to matter again. With an 11-10 split on the Foreign Relations Committee between Republicans and Democrats, Rubio holds the crown jewel of Trump’s Cabinet in his hands. Suddenly, the man Trump derided as “Little Marco” isn’t so little anymore.

And he also isn’t alone. More than a few rising Republican voices in Washington seem poised to speak out against Trump when they oppose him or stand up to Trump when they disagree, which many will. On the House side, conservative Republicans have already passed the REINS Act to require congressional approval for any regulation that costs more than $100 million, which is nearly all of them. That means, unlike the days of the Obama phone and pen going around Congress, President Trump will have to get Congress’ permission to write almost any new regulation.

On the Senate side, several of Rubio’s fellow sophomores from the Tea Party class of 2010 could give Trump headaches when the promises they’ve made to their constituents diverge from the promises Trump’s been making, especially when it comes to federal spending.

On Thursday, Kentucky Sen. Rand Paul voted against the budget resolution setting up the Obamacare repeal because he insisted a replacement exist for the health care bill first. Sen. Pat Toomey won re-election in Pennsylvania last year, outperforming Trump by a point, and will remain a fiscal hawk over Trump even when he just wants Republicans to let him pass his bills through Congress. Sen. Mike Lee outperformed Trump by more than 20 points in his home state of Utah last November, and was one of the few Republicans to call for Trump to drop out of the presidential race.

And of course, there’s Lee’s best friend, Sen. Ted Cruz. The Texan’s own re-election race in 2018 may keep Cruz close to the GOP tent during Trump’s first two years. But Cruz also made up with South Carolina Sen. Lindsey Graham on Thursday, even after Graham said Cruz should be murdered on the Senate floor, so it seems anything is still possible with Ted Cruz.

One-party rule in Washington is often full of unpleasant surprises for the president coming to town. Although he thinks the other party, in this case the Democrats, will be his opposition, the reality is almost always different. It will be members of Trump’s own party, potentially led by Rubio, Paul, Toomey and others, who will have the power, and oftentimes the incentive, to stop him in his tracks.

Rubio’s next step on the Tillerson nomination will send a message for him and other Republicans about the role they’ll play in Trump’s Washington. Will they be yes men in the Trump Party or fighters for what’s left of a conservative Republican Party? Maybe there is a way to be both at the same time.

For Rubio at least, it’s clear that 2017 is already different from the years he has spent in the Senate before. He hasn’t missed a single vote.