Agudah Yarchei Kallah Off to Exhilarating Start in Bnei Brak 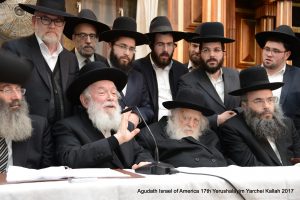 It was a breathtaking day filled with inspiration and energy as over 200 people gathered at the Lederman shul in Bnei Brak in a prelude to the Agudath Israel of America’s 17th Yerushalayim Yarchei Kallah.

The participants traveled directly from Ben Gurion airport to Malon Vizhnitz where they were hosted by the Municipality of Bnei Brak for a reception. They were warmly greeted by Bnei Brak Mayor Rabbi Chanoch Zeibert and Deputy Mayor Rabbi Avraham Rubinstein.

From there they traveled to the Lederman shul to have the incredible zechus of participating in an event graced by the presence of Harav Chaim Kanievsky, shlita. 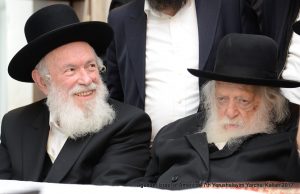 Harav Yitzchok Zilberstein, Rosh Kollel, Beis Dovid, Cholon and Rav, Ramat Elchanan, Bnei Brak, addressed the assembled with words of chizuk. He spoke movingly about the privilege to receive a brachah from a Gadol Hador upon whom the Shechinah rests, and concluded with a call for heartfelt tefillah and vitur bein adam l’chaveiro as a segulah for hatzlachah in life.

The Agudah’s Yarchei Kallah has evolved significantly from its humble beginnings when fewer than 50 participants took part in the inaugural program. Each year, more and more men from all over the world flock to Eretz Yisrael, eager to immerse themselves in four solid days of limud Torah. 2017 is already proving to be a historic year with the largest attendance ever. 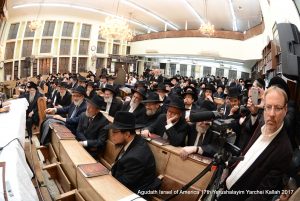 This year’s Yarchei Kallah will delve into the third perek of Maseches Sukkah, addressing the topics of lulav hagazul and hilchos arbaah minim. It will include daily Daf Yomi, lomdus shiurim, limud b’chavrusa and divrei machshavah from more than two dozen prominent Roshei Yeshivah and maggidei shiur. A truly international event, the Agudah Yarchei Kallah attracts participants from all over, including the greater New York area, as well as Lakewood, Los Angeles, Chicago, Cleveland, Toronto, Montreal, England, Switzerland, Australia and Eretz Yisrael. While some are businessmen and professionals and others involved in klei kodesh, all are united in their quest to spend four days delving deeply into limud HaTorah. The group also includes fathers and sons who have come to learn together and several tri-generational groups of grandfathers, fathers and sons! 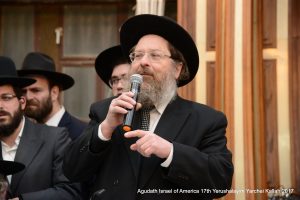 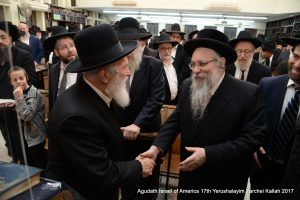 “It was very gratifying to see so many new faces at this Agudah Yarchei Kallah and the obvious excitement that they bring to the table. Passing the 300 mark creates a beis medrash where the intensity of learning is greater than ever. We are confident that both seasoned and newcomers will spend a week that will resonate for a long time,” said Rabbi Avrohom Nisan Perl, director of Torah Projects for Agudath Israel, and one of the organizers of the event. The Yarchei Kallah is a project of Agudath Israel of America’s Torah Projects Commission.