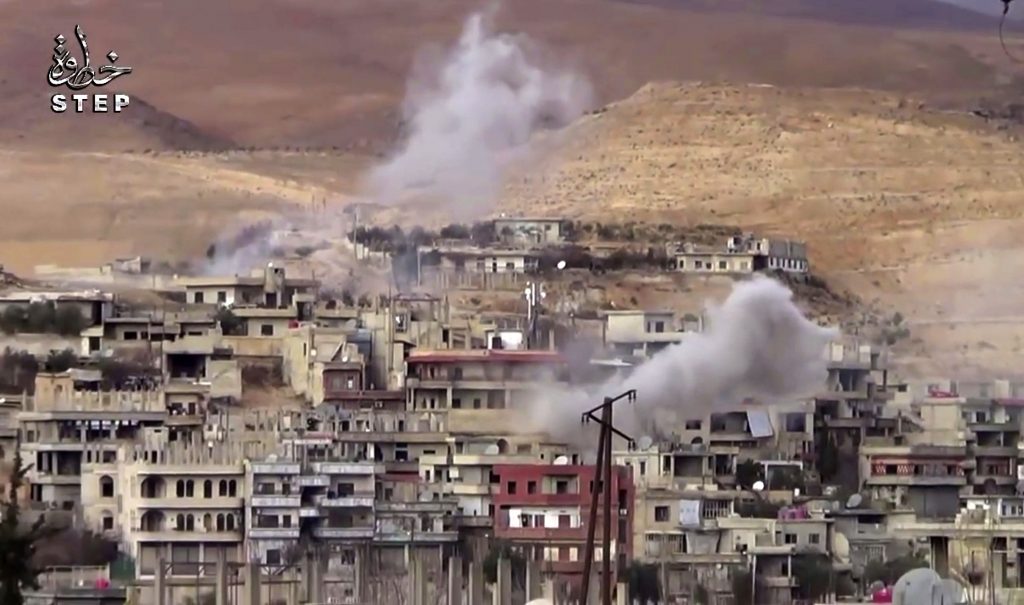 Pro-Syrian government troops shelled a village in a rebel-controlled area near Damascus on Sunday, killing at least 12 civilians and injuring several others who were taking shelter in a banquet hall.

The violence in the water-rich Barada Valley, which has raged since Dec. 22, has tested the country’s fragile ceasefire and restricted the flow of water to the capital. Despite an agreement to allow maintenance workers in to fix the water facility in the rebel-controlled valley, the violence continued, also trapping an estimated 100,000 residents.

On Sunday, shells fell on al-Reem banquet hall in Deir Qanoun village in the valley that houses hundreds of civilians who had escaped the intensified fighting. The activist-operated Wadi Barada Media Center said 12 were killed and more than 20 were injured. The group posted pictures of the bloodied floors of the hall, some of them showing bodies with severed limbs.

Fuad Abu Hattab, an exiled resident of Barada Valley and an activist with the group, said medical teams have been unable to move around the valley because of the fighting and it is not clear if the dozens of injured are getting any immediate care.

Abu Hattab said the center has served as a shelter for many displaced civilians who escaped the ongoing violence in the valley and other parts of rural Damascus. The hall has an area for weddings, as well as a restaurant and a number of rooms. It had largely been spared the intense fighting, Abu Hattab said.

The Syrian Civil Defense, a team of volunteer first responders in the rebel-held parts of Syria, also put the death toll at 12, saying the shelling hit a displaced people’s center.

The Britain-based Syrian Observatory for Human Rights put the death toll at seven but said it was likely to rise because some of the injured are in critical condition.

Fighting has raged in the valley that provides the Syrian capital with most of its water supply. In recent days, government and allied troops have been advancing in the valley despite talks to stem the violence.

The Lebanese Hezbollah group, which has terrorists on the side of the Syrian government, said pro-government troops seized a hill overlooking the water source in the valley Sunday.