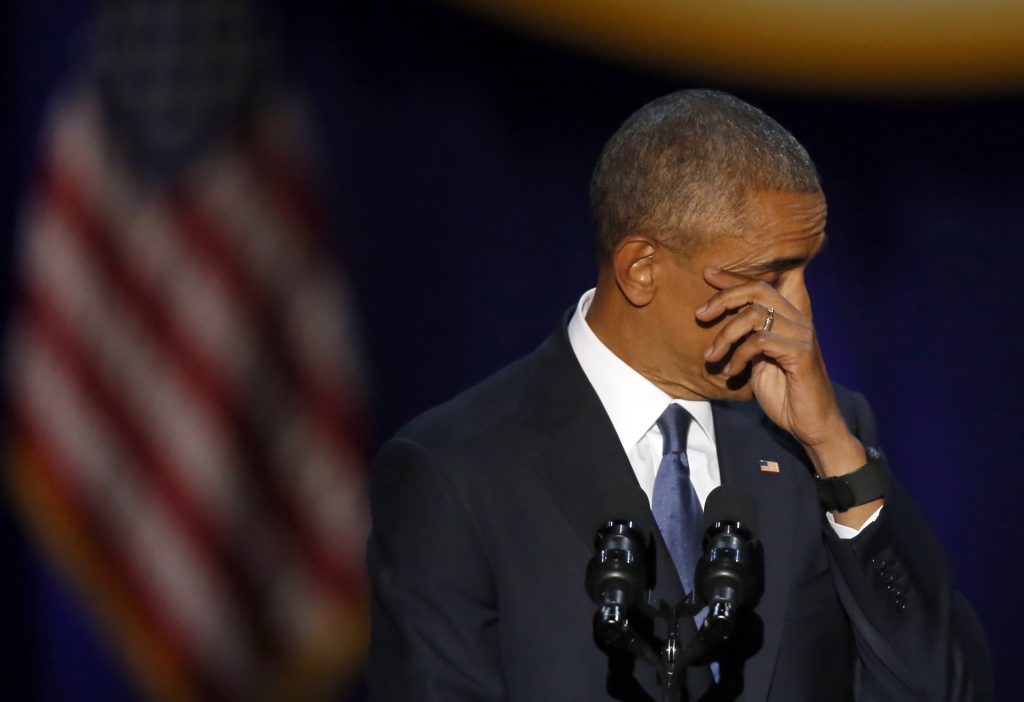 Tuesday night, exactly 2,899 days after his 2008 election victory speech in Chicago’s Grant Park, President Obama returned to his adopted hometown to give his farewell speech to the nation.

The president who promised to fundamentally transform the country, ticked off a list of what he deemed as his administration’s accomplishments. Interestingly, he neglected to explain why such accomplishments ultimately led to Democrats losing the White House, Congress and elected offices up and down state ballots over the past eight years.

Here are several other facts he didn’t include:

On his watch, there was an unparalleled expansion of the regulatory state. Since taking office in 2009, more than 200 new major regulations have increased the regulatory burden by $108 billion annually. And these burdens fall directly onto the shoulders of everyday Americans.

Heritage Foundation economists predict that Obama’s regulations to counter climate change alone will kill hundreds of thousands of jobs and also increase what American households spend on electricity by 13 to 20 percent over the next 20 years.

And then there is the president’s signature policy, the Affordable Care Act, which has proven to be anything but affordable. Contrary to what he originally promised, many Americans have not been able to keep their doctors.

So far, more than half of the 23 co-ops have failed, costing taxpayers $1.2 billion and forcing more than 740,000 people in 14 states, at last count, to scramble to find new health insurance.

Premiums did not go down, they went up. And by 2025, the Congressional Budget Office predicts that employment-based coverage will cost about 60 percent more than it does today because of Obamacare.

When it comes to fighting poverty, instead of building on successful measures, such as requiring able-bodied adults on welfare to work, prepare for work or do a job search, the Obama administration gutted work requirements. And though unemployment has dropped in recent years, the food stamp program has grown dramatically. In 2008, fewer than 30 million Americans were receiving food stamps. By 2014, that number had risen to 46.5 million.

Then there was his tendency to act like an imperial president.

Granting amnesty to millions of illegal immigrants, the Obama administration showed a complete disregard for Congress and the people’s elected representatives, using executive orders to get its way.

And, as Obama comes to the end of his two terms in office, is the world a better place? Is it safer?

By any objective, transnational terrorist threats are far greater today than when Obama took office in 2009. There have been more than 90 Islamist-related terror plots aimed at the United States since 9/11 and most of them have occurred on his watch.

The Iran nuclear deal can already be deemed a failure as Iran is now more aggressive than ever. It is accelerating its ballistic missile program, has escalated its military intervention in Syria, and continues to stoke the sectarian divisions in Iraq.

Our relations with China are worse and we’ve done nothing to stop its attempts to lay claim to the South China Sea in defiance of international norms. Obama clearly feels that getting the Chinese to sign the Paris agreement on climate change, matters more than their island-building and tests of new ballistic missiles in that region.

The president promised to reset relations with Russia and signed the New START agreement. The result? Russia continues to modernize nuclear weapons. It seized Crimea and continues to conduct a proxy war in Ukraine and support genocide in Syria.

And closer to home, there is little evidence that Obama’s normalizing of relations with Cuba has done anything but strengthen the Castro regime. Violent beatings against pro-democracy activists have escalated, and the number of political dissidents being detained is on schedule to break previous records.

But perhaps one of the most concerning outcomes of Obama’s policies is that the state of our military has deteriorated — primarily as a result of inadequate funding, which led to a shrinking force that possesses aging equipment and modest levels of readiness for combat. The Heritage Index of U.S. Military Strength now grades the state of the military as marginal — not exactly a term that puts fear in the hearts of those who might seek to challenge us.

Despite the president’s attempt to suggest otherwise, America is not better off and the world is not a safer place after his eight years in office.

I doubt this was the “hope and change” most Americans were counting on. And Americans followed his “Yes, we can” mantra by electing a completely new direction for the country in November 2016.

Genevieve Wood is the senior fellow in communications at the Heritage Foundation and the senior contributor for the Daily Signal.