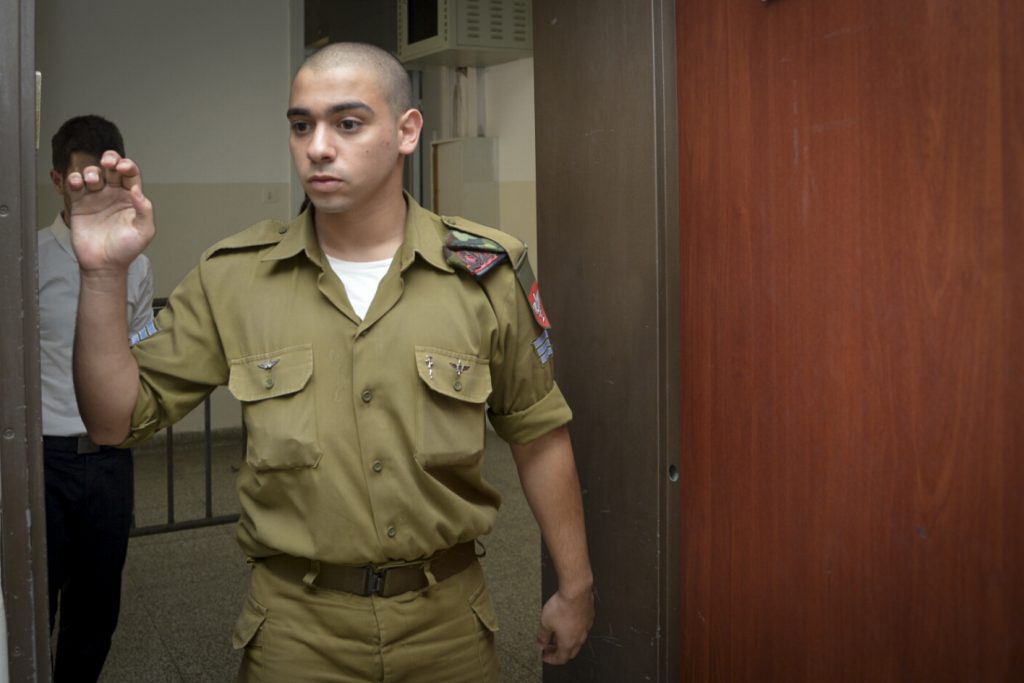 Attorneys for IDF soldier Elor Azaria are charging military prosecutors with unfair interference in the legal process their client is facing, in the wake of a conversation held by the commander of Azaria’s unit and his parents. According to attorney Yoram Sheftel, the attempt by the commander – apparently at the behest of military prosecutors – to convince the family not to appeal their son’s conviction is “a serious compromising of the legal process,” sufficient to prompt a mistrial.

At the meeting last week, the commander reportedly discussed with the family a variety of options to censure the soldier, who was convicted of manslaughter for killing a terrorist who was shot and neutralized after he attacked IDF soldiers with a knife on Purim in Chevron. Azaria claimed that he feared that the terrorist had been carrying a bomb that he intended to explode even while he was on the ground.

Among the options was a deal that would forgo jail time for Azaria altogether, IDF sources were quoted as saying. “An appeal could end up sending the soldier to jail for an extended period, and requesting a pardon will require a year or more,” said the source. “The best alternative is to work with the system to lighten his punishment. A deal like that could result in Azaria’s being sentenced to time served in detention over the past half year, with no further jail time.”

Reports of the meeting generated rumors that a deal had been made to release Azaria, but military prosecutors stressed that despite the rumors, no deal was offered and none agreed to. “We deny the report on Channel Two that the soldier was offered a deal in which he would receive an easier punishment if the family would promise not to appeal,” a spokesperson for the prosecutor’s office said.

It turned out, however, that the soldier’s father, Charlie Azaria, had recorded the conversation, and the commander is clearly heard trying several times to convince him not to appeal the younger Azaria’s conviction. “To convince a convicted person not to appeal is a serious impediment to the legal process,” said Sheftel. “It is apparent that the military prosecutors realize that they have a very weak case and are fearful of our ability to respond to the conviction at appeal, with the entire country seeing and hearing how removed from reality the prosecution’s case really is.” Sheftel has requested that the military prosecutor’s office be investigated for obstruction of justice.