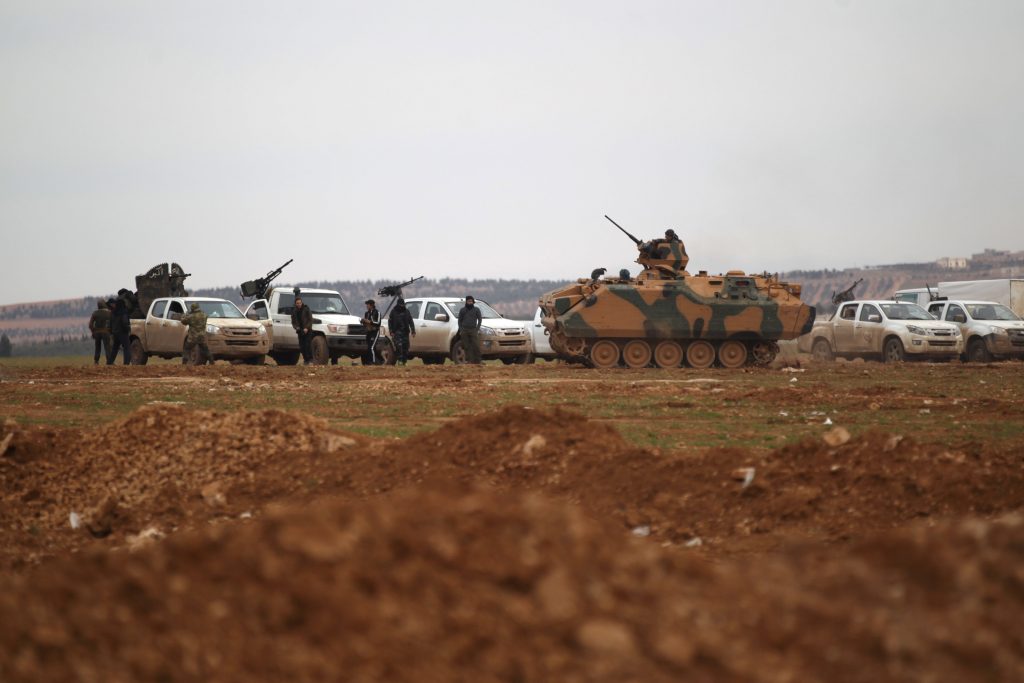 Islamic State terrorists launched their biggest assault in a year on government-held areas of the contested city of Deir el-Zour Saturday, attacking from several fronts and triggering intense fighting in the eastern region bordering Iraq, the Syrian government and opposition activists said.

Syrian state media said three people were killed and nine were wounded in IS rocket attacks on several neighborhoods of the city.

Intense fighting broke out between Syrian troops and the group’s terrorists both inside the city and around the vicinity of a nearby terrorist airport controlled by government forces. The terrorists had launched their multi-pronged attack starting from the area of Baghaliyeh near the northwestern tip of the city. Deir el-Zour carries strategic significance for IS as it links the group’s Iraq territory to its de facto capital of Raqqa in Syria.

Loud explosions that shook the city were reported. Activists said Syrian warplanes were taking part in the battles.

The Deir Ezzor 24 news network reported ongoing clashes since the morning near Deir el-Zour military airport and other fronts in the city and said Syrian warplanes targeted Baghaliyeh and Ayash areas and the vicinity of an army base known as Brigade 137 west of the city.

The extremist group, which controls most of Deir el-Zour province, has kept the provincial capital under siege since 2014. Government forces have withstood the encirclement thanks to air-dropped humanitarian assistance and weapons and ammunition flown into the airport. Remaining residents have reported malnourishment and starvation amid severe shortages of food, water and fuel.

IS has tried to capture the government-held neighborhoods of Deir el-Zour and the city’s suburbs over the past months without much success.

The Syrian Observatory for Human Rights said Saturday’s offensive was the most intense since mid-January 2016, when the group killed dozens of people, most of them pro-government militiamen, in wide-scale attacks on the city that saw the group make significant advances. Most of those casualties took place in Baghaliyeh, and the killings — many people were shot dead or beheaded — were some of the worst carried out by the terror group.

The Observatory said the group has recently brought in reinforcements, including large amounts of ammunition and fuel, in preparation for the battle. It said at least 32 people were killed in Saturday’s fighting, including 12 soldiers and allied militiamen and 20 IS terrorists.

The Islamic State group, which in 2014 seized large parts of Iraq and Syria and established a so-called Islamic “caliphate” straddling both sides of the border, is under intense pressure in both countries where it has lost significant territory in recent months.

Meanwhile in northern Syria, opposition activists reported a series of government airstrikes on Idlib province over the past 24 hours, including an attack that killed at least 11, mostly civilians, in Maaret Misrin.

In Damascus, the government maintained its offensive to uproot rebels in control of a nearby valley that provides the capital with the majority of its water supply, further threatening a fragile ceasefire that appeared to be fraying.

State-run news agency SANA reported later Saturday that “terrorists” had assassinated Ahmad al-Ghadban, who was appointed by the government to coordinate with rebels in the opposition-held Barada Valley to stop the fighting and allow maintenance workers to fix the water facility there.

For days negotiations have stalled and failed to restore the water flow to the capital — restricted since Dec. 22 — and to end the government offensive to uproot the rebels in the valley. The U.N. says the capital has suffered a water shortage that has affected nearly 5.5 million residents. The fighting has trapped nearly 100,000 residents of the opposition-held valley.

The ceasefire brokered by Russia and Turkey, who support opposing sides in the Syrian civil war, went into effect on Dec. 30. It excludes terror groups such as the Islamic State group.