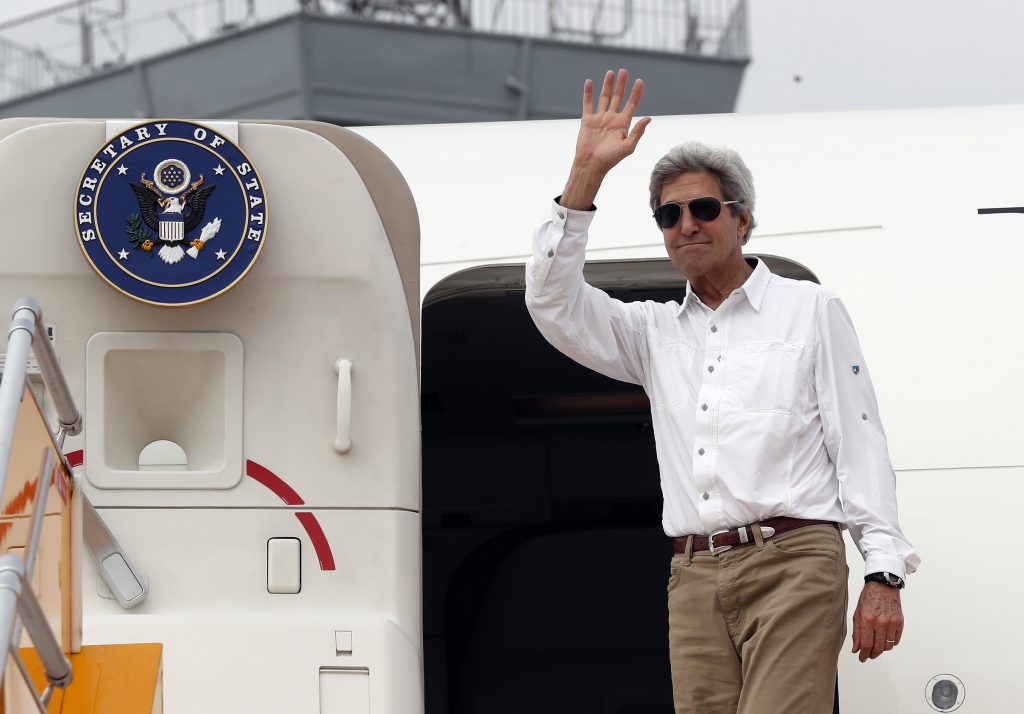 The Obama administration’s eight years of unsuccessful Israeli-Palestinian diplomacy will come to a crashing end this weekend, with chances for a Mideast peace deal at perhaps their lowest ebb in a generation. A Paris peace conference attended by Secretary of State John Kerry – without representatives of Israel, the Palestinians or the incoming U.S. government – isn’t expected to produce any tangible progress.

At a time when President-elect Donald Trump’s administration is promising a fundamental shift toward Israel, the State Department said Kerry was only participating in the French-hosted event to ensure America’s interest in a two-state solution to the conflict is preserved. The blunt statement reinforced the dwindling hopes for a diplomatic breakthrough.

No one expects a plan to emerge that could lead to new Israeli-Palestinian negotiations. While more than 70 countries are attending, but including neither Israel nor the Palestinians, the U.S. is primarily focused on shielding Israel from unfair criticism and ensuring concerns about Palestinian incitement to violence aren’t ignored.

But the administration may find its voice ignored. While the U.S. received credit from close allies in Europe and elsewhere for abstaining from a December U.N. Security Council resolution condemning Israeli building on land liberated in the Six-Day War, America’s partners have grown tired with its leadership on the peace process. Obama’s efforts in 2009-2010 and 2013-2014 both failed.

But Kerry and other administration officials fear an even worse scenario emerging: the incoming Trump administration moving the U.S. embassy from Tel Aviv to Yerushalayim, and ending Washington’s long-standing opposition to Israeli building on land liberated in the Six-Day War.

The embassy relocation would be the symbolic gesture. Trump and his choice to be ambassador to Israel have telegraphed the commitment, which would ostensibly recognize Yerushalayim as Israel’s capital after decades of insisting that the city’s status must be determined by direct negotiations between the Israelis and Palestinians.

Kerry’s biggest decision in Paris may be a political one: whether to sign the concluding document if it includes a specific warning to Trump against moving the embassy. The Palestinians, Arab nations and others are pushing the issue, fearing the U.S. move could spark a new conflagration. French officials say the warning could be in the document.

Kerry’s signature would be a shot across the bow of Trump’s foreign policy and further undercut President Barack Obama’s promises for a smooth transition of power. Republicans and even many Democratic lawmakers reacted angrily to the administration’s U.N. vote in December and a subsequent speech by Kerry on the Israeli-Palestinian impasse. The House of Representatives even condemned the Security Council resolution.

Israel is bracing for a new U.S. policy. On Friday, the Shomron Council said it will send a delegation to Trump’s presidential inauguration next week after receiving an invitation.

In his Senate confirmation hearing this week, Trump’s choice to succeed Kerry as secretary of state, former Exxon Mobil CEO Rex Tillerson, voiced support for a two-state solution, but said it may be unrealistic. The sides haven’t even negotiated indirectly since the process Kerry led collapsed in 2014.

Given the stalemate and the U.S. changes that may be coming, even preserving the concept of two states living side-by-side and in peace could prove difficult.

Nevertheless, the Paris conference aims to make that a priority.

In a clear message to Israel and the Trump administration, the dozens of countries attending are expected to reiterate their opposition to Israeli settlements and call for the establishment of a Palestinian state as “the only way” to ensure peace in the region.

A draft of the final communique statement obtained by The Associated Press urges Israel and the Palestinians “to officially restate their commitment to the two-state solution.” It tells Israel that no changes to its pre-1967 borders will be recognized if the Palestinians aren’t in agreement.

Prime Minister Binyamin Netanyahu has ruled out a return to Israel’s 1967 lines, and many members of his coalition oppose Palestinian independence. He also has derided the Paris get-together, claiming it is “rigged” against his country.