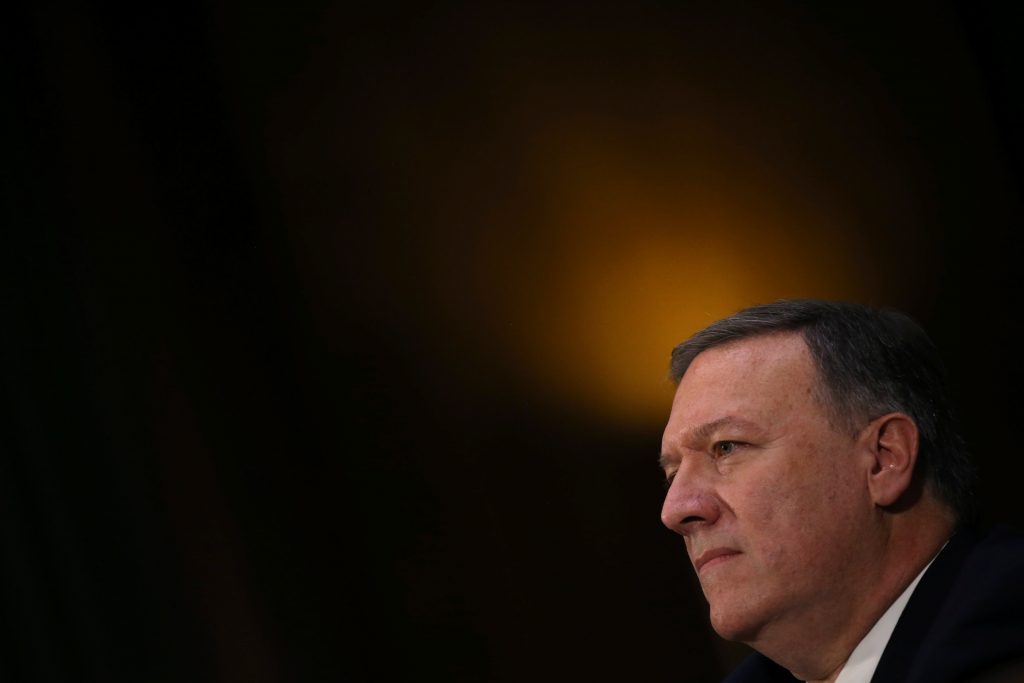 During his confirmation hearing, Pompeo told senators that as CIA director, he would not only commit to cross Trump, but that the president-elect would expect him to do so.

Pompeo said that “you have my commitment that every day, I will not only speak truth to power, but I will demand that the men and women … who live their life doing that will be willing, able, and follow my instructions to do that each and every day.”

If he survives his grilling from Congress on Thursday, Trump’s nominee for CIA director could soon inherit one of the most difficult jobs in Washington: liaison between the country’s intelligence analysts and a president who has repeatedly derided their work.

Pompeo’s confirmation hearing comes on the heels of the president-elect launching another broadside at the intelligence community, dismissing as “nonsense” a classified report summarizing allegations that Russia had gathered damaging personal information about him. Trump suggested that intelligence officials might have deliberately leaked the uncorroborated report to smear him, adding: “That’s something Nazi Germany would have done.”

Pompeo told senators that he considered the intelligence community’s report on Russia to be “sound” as an analytical product.

“It’s pretty clear about what took place about Russian involvement in efforts to hack information,” Pompeo continued, saying he was “very clear-eyed” about the intelligence report’s findings, and promising to relay his take “not only to the president, but to the team around him.”

In response to questions, Pompeo also distanced himself from Trump’s previous indications that he was open to resurrecting “enhanced interrogation techniques” such as waterboarding. Pompeo said he would “absolutely not” comply with any orders from the president to start using such techniques again.

Trump has indicated since the election he is reconsidering those comments.

Committee ranking member Mark Warner, D-Va., told Pompeo that he would “need your public assurance that you will always seek to provide unbiased and unvarnished and timely assessments” of intelligence, and for him to “reassure CIA employees” that their work was valued — both a reaction to recent Trump questioning of the veracity of intelligence reports and denigrating personnel.

Pompeo offered several words of praise to the intelligence community personnel, noting that he has “seen their morale through tough times … I have seen them walk through fire.”

Pompeo will have to win over two disparate audiences on Thursday: the senators who will vote on whether to confirm him for the CIA job and thousands of CIA employees who will hang on his every word.

In his opening statement, Pompeo praised the CIA as “the finest intelligence agency the world has ever known.”

He said his focus as director would be to ensure that the agency “remains the best in the world at its core mission: collecting what our enemies do not want us to know.”

“I will lead the Agency to aggressively pursue collection operations and ensure analysts have the time, political space, and resources to make objective and sound judgments,” Pompeo said.

Pompeo has said little publicly in response to Trump’s harsh criticism of the intelligence agencies that traditionally serve as the U.S. president’s window to the world. The 53-year-old Kansan served a stint on the House Intelligence Committee, where he won widespread respect for his intellect while also cementing his reputation as a fierce partisan, leading the attack against the Obama administration on the Benghazi affair and the Iran nuclear deal.

Pompeo will likely face sharp questioning over his past statements defending the use of enhanced interrogation methods by the CIA against suspected al-Qaida operatives after the Sept. 11, 2001, terrorist attacks. Pompeo, reacting to a 2014 Senate report critical of the CIA’s methods, said the interrogation program was “within the law, within the Constitution and conducted with the full knowledge” of congressional leaders.

Anticipating that, Pompeo told senators in his opening statement that “having been a member of the House Intelligence Committee and an overseer of our nation’s intelligence enterprise, I understand full well that my job, if confirmed, will be to change roles from the centrality of policymaking to information provider …,” adding that the CIA director must “stay clearly on the side of intelligence collection and objective analysis of our national security challenges — presenting factual intelligence and sound judgments to policymakers, including this committee.”

He raised the Iran nuclear deal as an example, pledging to lead an agency that makes “objective, sound judgments,” despite his opposition to the nuclear pact. Pompeo listed Iran, as a state sponsor of terror, among the greatest threats he sees to America — a list that included the Islamic State, a resurgent Russia, and mounting cyber threats.

Senators are likely to press Pompeo on his views about Trump’s recent diatribes against the intelligence agency. Since his election, Trump has disparaged and even mocked the intelligence community’s consensus that Russian officials ordered a cyber campaign to undermine Democratic challenger Hillary Clinton and tilt the election in his favor.

Pompeo did not address Trump’s comments in his opening statement. But he did share an anecdote about a woman he met on his first tour of CIA headquarters, as an example of the respect he has for the long hours and hard work intelligence personnel dedicate to their jobs.

Current and former intelligence officials have expressed concern about the effect of Trump’s comments on thousands of analysts and operatives, some of whom routinely risk their lives in dangerous assignments overseas. Trump’s comments likening the actions of intelligence agencies to the Nazis struck some former officials as particularly egregious — a “third rail” of American political discourse, according to John A. Rizzo, the CIA acting general counsel under Bush.

“Pompeo, if asked, must walk that repellent slander back,” said Rizzo, who authored a memoir about life inside the CIA. “CIA people over the years, including me, have been accused harshly in personal terms by segments of Congress and the media. We are used to that. But never has the word ‘Nazi’ been hurled by any government official, let alone an incoming president.”