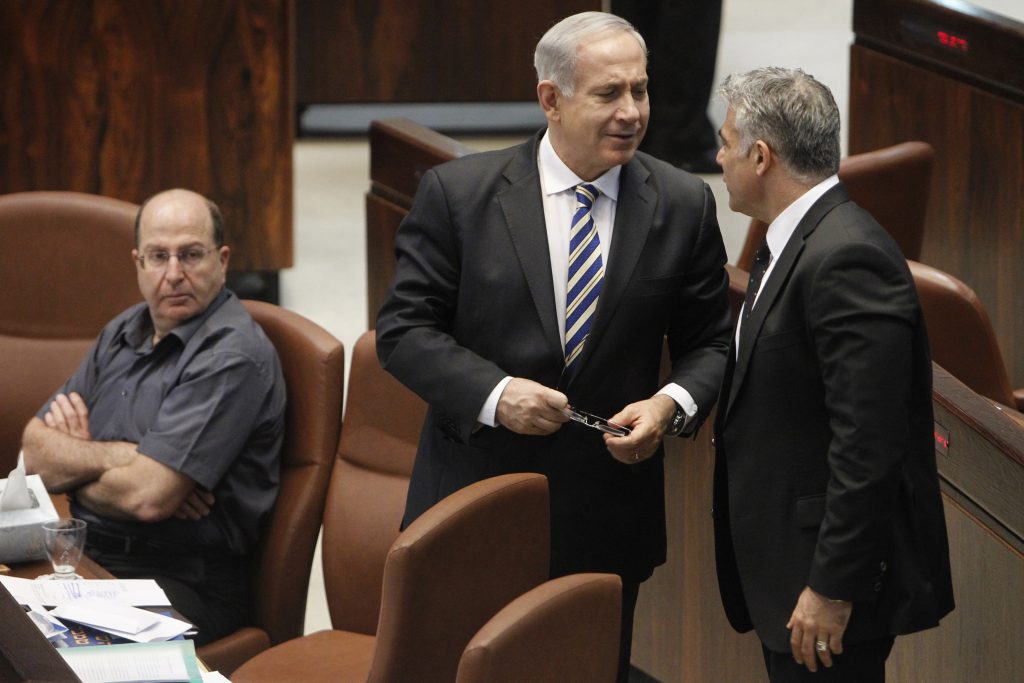 If elections were held today, Yesh Atid would be the largest party in the Knesset, a new poll by Channel Ten and Walla News claims. The poll has the party led by Yair Lapid garnering 27 Knesset seats, with Binyamin Netanyahu’s Likud coming in second, with 24 seats.

While Lapid’s party may be more popular, Netanyahu is still the people’s choice for Prime Minister – but just barely. In response to the question of whom they wanted to see lead the country politically, 37 percent of Israelis said they preferred Netanyahu, but 33 percent said Lapid would be a better choice. “I don’t know” as a choice came in a close third, with 30 percent of respondents responding to the question in that manner, indicating that the field was wide open for either of the candidates.

Coming in third is Naftali Bennett’s Jewish Home, with 13 seats, followed by the United Arab List, with 12. The current number two party in the Knesset, Zionist Camp, falls to the single digits, with 9 seats, tied with Avigdor Liberman’s Yisrael Beytenu. Shas and United Torah Judaism get 7 seats each. Meretz and Moshe Kachlon’s Kulanu close out the list with 6 each. With that, 27 percent of respondents said that they were not ready to choose.

This is the first poll taken after the recent revelations of Netanyahu’s legal troubles in two high-profile cases – one in which he is accused of receiving “favors” worth hundreds of thousands of shekels from Israeli-American businessman Arnon Milchan, who investigators believe provided Netanyahu with expensive cigars over many years, and a second in which Netanyahu and Yediot Acharonot publisher Arnon Mozes supposedly discussed a deal to soften the newspaper’s coverage of Netanyahu in exchange for favors.

While the President would give Lapid first crack at forming a government if the elections result panned out like this, the Yesh Atid leader would probably have a hard time doing that. The “national camp” coalition currently led by Netanyahu would retain its majority in the Knesset, with the parties currently in the government garnering a total of 66 seats, very similar to the numbers in the current Knesset.

To form a government, Lapid would be ten seats short, even if he were to include Yisrael Beytenu and Kulanu (it’s assumed he would not include Meretz and UAL). That means he would have to include either Jewish Home or the chareidi parties – both very unlikely scenarios, as neither the chareidi parties or Lapid would be prepared to sit in the same government, while the falling out between Lapid and Bennett a year and a half ago shows no signs of improving. He could try to bring the Likud into his government, but in that case the best he could do would be to form a version of a national unity government, with Netanyahu and he taking turns leading the country.

The poll of 597 Israelis was a reliable representative sample of the Israeli electorate, include Jews, Arabs, and various ethnic, religious, and age groups, said Dr. Ariel Ayalon of the Midgam Project, which conducted the poll on behalf of Channel Ten and Walla.