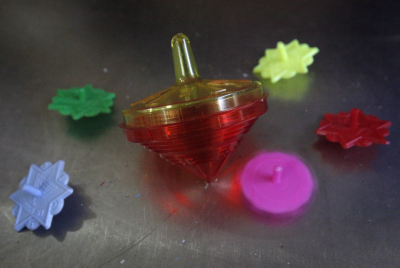 More than a week after Chanukah, doctors were able to successfully remove a dreidel from the stomach of a child who had swallowed it during the holiday. Doctors at Shaare Zedek Hospital put the five-year-old under sedation and pulled the dreidel out through the boy’s gullet. The patient is reported to be doing fine.

According to his parents, the Yerushalayim youth was playing with a dreidel when it suddenly disappeared. After a few minutes, his mother noticed that it was missing and asked her son what happened to it. He told her that he had swallowed it. The panicked mother rushed the child to her local doctor, and an x-ray clearly identified the dreidel in the child’s stomach. He was immediately sent to the hospital, where doctors recommended that the parents wait for several days. But when the child started complaining of a stomachache, they returned to the hospital, where doctors successfully removed the item.

It was nothing less than a post-Chanukah nes, said Dr. Rav Lev-Zion, a top doctor in the hospital’s endoscopy division. “When swallowed, sharp items can damage the windpipe and cause death within moments, especially in children. Parents need to be extremely aware, and if their children tell them they swallowed something, or if they appear to be choking or coughing suddenly, or if they complain of stomach or chest pains and have trouble swallowing, they need to immediately contact medical services for emergency help.”