Politics It Was a Mad Day in American Politics
Politics 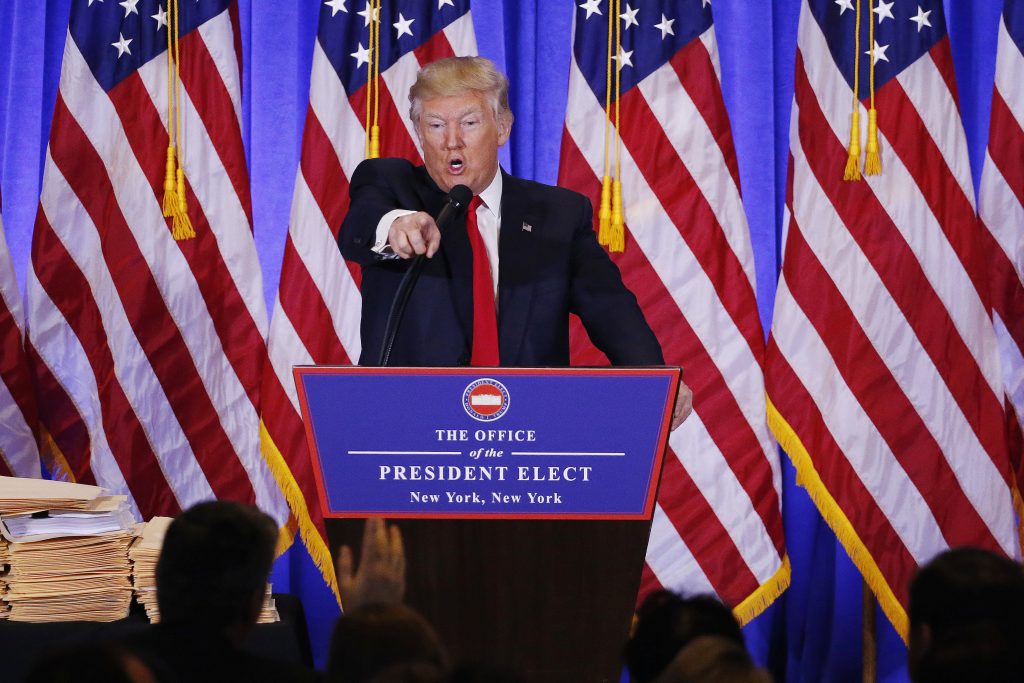 It was a frenzied decathlon of a day in American politics, and so Sen. Christopher Coons (D-Del.) pulled his cellphone out of his pocket as he power-walked the halls of the U.S. Capitol. Coons’s wife had installed a step counter. The step counter would now be put to the test.

“Twenty-eight hundred,” he read out loud. It was not yet 11 on Wednesday morning, and democracy was just getting started.

Wednesday was a big, weird moment in the lurching transition of federal power. Did it reach peak weirdness when a group of protesters began to march around the U.S. Capitol in dinosaur costumes? Or was it reached only when President-elect Donald Trump, in Manhattan, denied new allegations about himself ?

Three major Senate confirmation hearings, a “vote-a-rama,” and the first news conference held by the president-elect since he claimed the Republican nomination nearly six months ago: Wednesday was business as unusual, with bureaucratic Washington adjusting to the age of Trump and to a newborn administration.

At 9:15 a.m., Rex Tillerson, the nominee for secretary of state, took his seat in hearing room 106 (moved from room 423). This was followed at 10:15 by the confirmation hearing of Transportation Department nominee Elaine Chao in room G50 (moved from room 253). These accompanied the hearing (continued from the previous day) for Sen. Jeff Sessions (R-Ala.), the nominee for attorney general, but excluded the hearings for nominee for CIA director, Rep. Mike Pompeo, and education secretary nominee Betsy DeVos, which had been postponed at the last minute when Senate Democrats argued that the schedule was already a deluge.

The day became a confirmation shell game — Senate committee members could question the nominees, but only if they could figure out which room they were in.

“Did you go to Chao?” a young woman asked her friend, as they both searched for seats at one confirmation hearing in the Dirksen office building.

At the front of the room, Chao took her seat, introduced her proud father to the panel and withstood a joke from her husband, who happens to be Senate Majority Leader Mitch McConnell (R-Ky.), who promised the committee that his wife had “great judgment.”

Meanwhile, one flight up, the admission line for Tillerson’s hearing stretched out the door and around the corner, with Capitol employees acting as ushers for people seeking available seats. As committee members questioned the former ExxonMobil chief executive about his potential conflicts of interest and his ties to Russia, the entrance door opened and a chorus of voices could be heard chanting: “Reject Rex! Reject Rex!”

It was the dinosaur people — not the actual ones in costumes, which were too unwieldy for the madhouse corridors of the Senate, but some of their civilian-dressed cohorts, who came in to protest that the nominee’s beliefs were as outdated as a tyrannosaurus rex.

Meanwhile, one building over and outside of Jeff Sessions’s hearing, Khizr Khan, the Gold Star father who campaigned for Hillary Clinton and became the target of a Trump rampage on Twitter, quietly browsed his phone. “I have no illusion that this nominee will not be confirmed,” he said to a reporter. “But we are going to continue to hold him accountable. It was very heartening to hear this nominee say that he does not stand for a Muslim ban, and I hope that was genuine and it wasn’t for the expediency of getting confirmed.”

Expediency was both the rule of the day and the fear of it, as committee members attempted to vet would-be appointees, some of whose nominations had been controversial. Tillerson was the country’s would-be chief diplomat, with no political experience. Sessions was the country’s would-be chief attorney, whose appointment had been protested by civil rights groups. Less than 18 hours before, news had broken that the president-elect had been briefed on unconfirmed claims that Russia had gathered compromising information about him.

At 11:15 or so, Trump himself appeared — in person at Trump Tower, on screens everywhere else — stealing the thunder of even his own nominees, revisiting some of his favorite topics: the “crooked” media, the losers who didn’t support him, the tax returns he hasn’t released and says aren’t important.

“Did you watch the press conference?” one Republican congressman asked another as they got on an elevator back in Washington.

“No,” said the second. “That’s time in your life you never get back.”

Through the day, the conductor of the underground subway that connected buildings on the Capitol complex had been piloting shuttles nonstop (“I love busy days,” she confided cheerfully), and senators were Fitbitting through underground tunnels to get from hearing to hearing.

“I was on ‘Morning Joe’ earlier,” explained Coons, the senator from Delaware, as he rushed out of one session and onto an elevator. “And then 9 a.m. was Tillerson. And then I had to run to Sessions to introduce my old friend William Cornell Brooks,” president of the NAACP.

And then Coons had to run back to Tillerson. And now he was running back to Sessions. Coons got off the elevator, and he cut through the cafeteria and pressed the button for another elevator. He was limping a bit because of a weekend injury — “I’m not going to talk about it. Old man plus ice,” he said — and before he got back to Sessions, he had to stop off and be interviewed by NBC’s Andrea Mitchell.

“And then, of course,” Coons continued, “Tonight is the vote-a-rama.”

Have we mentioned the vote-a-rama? Wednesday at 5 p.m. (moved from 11 a.m.), a voting blitz in which legislators could offer a parade of amendments relating to the repeal of Obamacare. The vote-a-rama was set to potentially include more than 100 amendments. The vote-a-rama, it was said, could go on all night.

Just as Coons slipped back into the Sessions session, a protester was ejected out of it — an older woman, brandishing a sign reading “No Torture Cabinet.”

In the hallway, she instructed the security guard on the correct way to arrest her. “If you cuff me, you are going to injure my shoulder,” she explained.

“Well, that’s OK. I’ve been here before, and I never resist arrest. Just, be careful if you cuff me because I have a bad shoulder.”

Sen. John Thune (R-S.D.) told Chao that he had “probably the toughest question of the day” for her and then asked whether she preferred [certain] basketball teams.

Sen. Marco Rubio (R-Fla.) pressed Tillerson to label Vladimir Putin a “war criminal,” and Tillerson replied, “I would not use that term.”

And a maintenance worker at the Capitol, already looking ahead to the inauguration, leaned against an elevator wall, holding a vacuum cleaner in one hand. As the quiet elevator arrived at a floor bustling with congressional staffers, the man turned to tell his co-worker, wearily: “You might as well enjoy it. Next week, it’s going to be hard to get in this building at all.”