California officials opened a Sacramento dam for the first time in more than a decade and thousands of people remained under evacuation advisories in Sonoma County as another storm swept into Northern California and Nevada on Tuesday after a torrential weekend drenching.

Snow was falling heavily in the Sierra Nevada with more expected through Thursday. A blizzard warning was in effect through Wednesday. 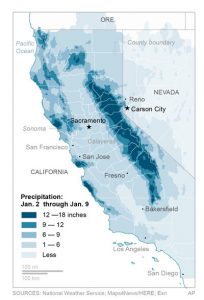 The heavy rains prompted California’s Department of Water Resources to open about a half dozen of the Sacramento Weir gates around 4:30 a.m. Tuesday to prevent flooding from the swollen Sacramento River.

The dam is nearly 2,000 feet in length and consists of 48 gates that are removed manually. They were last opened in December 2005.

“They were a little bit rusty,” department spokesman Ted Thomas said, “but they were able to open them fine.”

Evacuations are still advised for about 3,000 people living in low-lying areas of the small communities of Guerneville and Monte Rio, the Santa Rosa Press Democrat reports.

Parts of Northern California were soaked by more than a foot of rain over a 72-hour period that ended early Monday, forcing hundreds to evacuate and leaving thousands without power.

The heavy rains forced rivers out of their banks and toppled trees, among them the famed “Pioneer Cabin” giant sequoia in Calaveras Big Trees State Park that had a drive-thru tunnel carved into its base more than a century ago.

Emergency crews in rescue boats and helicopters took advantage of a one-day respite from the rains later Monday to rescue stranded people and assess damage after what authorities said was the heaviest rain in a decade.

In the Sierra Nevada mountains, a winter storm warning was in effect until Thursday morning with the potential for blizzard and white-out conditions, said Scott McGuire, a forecaster for the National Weather Service based in Reno, Nevada.

Four to 8 feet of snow are forecast through Thursday above 7,000 feet, and the Lake Tahoe area could get between 2 to 5 feet of snow, he said.

“People need to avoid traveling if at all possible,” said McGuire.

In the San Francisco Bay Area, a coastal flood advisory was in effect from Tuesday through Friday, with a forecast for up to 7-foot “king tides” that could pose a flooding risk for coastal roadways, said Steve Anderson, a National Weather Service forecaster in Monterey, California.

Flood warnings and a high-wind watch were also in effect Tuesday for the Russian River, which rose to its highest level since 2006 and spilled over its banks early Monday, flooding roads and vineyards and forcing schools to close.

“It’s been about 10 years since we’ve experienced this kind of rainfall,” Anderson said Monday. He said the storm system arriving Tuesday was not as potent as over the weekend but could still cause problems. “The big concern is flash flooding, rapid rises on creeks and the Russian River coming out of its banks again.”

Parts of California’s wine country in Sonoma County were among the hardest hit, receiving up to 13 inches of rain. Rolling hills and vineyards along the scenic route known as River Road were submerged Monday with just the tips of the vines visible in completely flooded fields.

Melba Martinelli, who lives in the Russian River town of Guerneville, was wading through her yard Monday in knee-high rain boots, surrounded by flooded streets.

“I’m watching the water come up higher and higher, and my boots are almost going underwater now,” Martinelli said. “The river is coming up the street now. It’s pretty scary.”

The back-to-back storms that hit California and Nevada since last week are part of an “atmospheric river” weather phenomenon that draws precipitation from the Pacific Ocean as far west as Hawaii and its impact can be catastrophic for areas hit by the heaviest rain.

After closing over the weekend, Yosemite National Park planned to reopen the valley floor to visitors Tuesday morning after a storm-swollen river forced its closure through Monday, park spokesman Scott Gediman said.

Emergency workers in Nevada voluntarily evacuated about 1,300 people from 400 homes in a Reno neighborhood as the Truckee River overflowed and drainage ditches backed up.

After touring the two cities, Nevada Gov. Brian Sandoval said no serious injuries were reported during the flooding, which authorities had feared might be the worst in a decade.

In Colorado, snow and strong winds worked together to set off an avalanche up to 15 feet deep that closed Interstate 70 at Vail Pass in Colorado early Tuesday.

A tractor-trailer carrying mail was caught in the slide, but the driver wasn’t injured, the Colorado State Patrol reported.

The avalanche risk for most of Colorado’s mountains is expected to remain high through at least Wednesday.