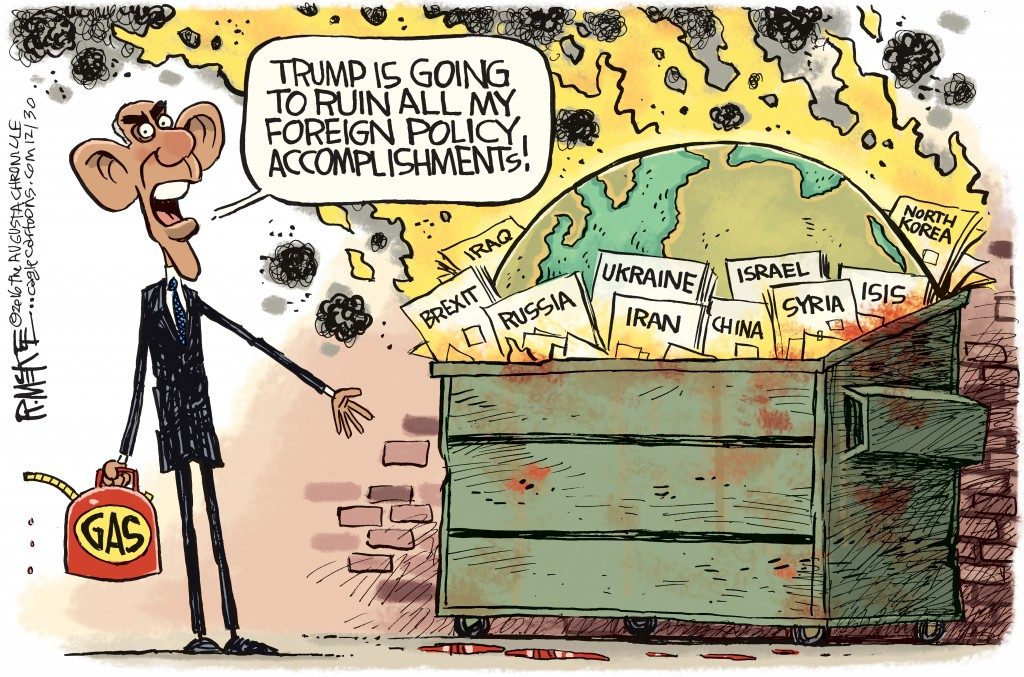 When President Obama moves two miles from 1600 Pennsylvania Avenue to 2446 Belmont Road in Washington’s Kalorama neighborhood, he will live half a mile from 2340 S. Street, where Woodrow Wilson spent his three post-presidential years. Wilson’s embittering foreign policy failure was the Senate’s rejection of U.S. participation in the embodiment of Wilsonian aspirations, the League of Nations. The president leaves office serene because, as he put it, “almost every country on Earth sees America as stronger and more respected today than they did eight years ago.”

Two seemingly unimpressed nations are Russia, which is dismembering a European nation (Ukraine), and China, which is shredding international law by turning the world’s most important waterway, the South China Sea, into militarized Chinese territory.

President Obama’s policies that brought America to a pinnacle of admiration, as he sees it, were an amalgam of Wilsonian and anti-Wilsonian elements. Wilson’s grand ambition for the United States was to reorder the world in a way that would make it unnecessary for America to have grand ambitions. He thought America could lead a restful life after strenuous diplomacy had written rules for the game of nations.

Many progressives believe — they take this from the Founders’ favorite philosopher, John Locke, while rejecting his natural-rights teaching — in humanity’s natural sociability. This disposes them to believe that peace among nations is natural and spontaneous, or it would be if other nations would cleanse their minds of the superstitions that prevent them from recognizing the universal validity and demonstrable utility of American principles. These, said Wilson, are shared by “forward looking men and women everywhere” and “every modern nation.” He also said, inconsistently, that “every nation of the world needs to be drawn into the tutelage of America.”

President Obama seemed to doubt that America has much to teach the world, beyond post-Iraq modesty — herewith his Wilsonian dimension — and the power of diplomacy’s soft power to tame the world. Although neither the English nor the American nor the Russian nor the Spanish nor the Chinese civil war was ended by negotiations, President Obama thought the especially vicious and complex civil war in Syrian’s sectarian and tribal society could be ended diplomatically. Russian President Vladimir Putin picked a side and helped it win.

The fact that the world is more disorderly and less lawful than when Obama became president is less his fault than the fault of something about which progressives are skeptical — powerful, unchanging human nature… They are desirous and competitive, and hence are prone to conflict.

And to causing progressives to furrow their brows in puzzlement. In 2014, when Russia annexed Crimea, Secretary of State John F. Kerry was disappointed with Putin, saying, more in sorrow than in anger: “You just don’t in the 21st century behave in 19th-century fashion.” If you do, you place yourself on (in one of Obama’s favorite phrases) “the wrong side of history.”

Make that History, which, in the progressives’ lexicon, is a proper noun, an autonomous thing with a mind, or at least a logic, of its own. Kerry’s reprimand of Putin expressed a progressive’s certitude about progress: The passage of time should ineluctably improve the comportment of nations. Which is why in 1911, the renowned 11th edition of the Encyclopedia Britannica, in its entry on torture, said “the whole subject is one of only historical interest as far as Europe is concerned.” The Dachau concentration camp was opened in March 1933.

President Obama’s foreign policy presumed the existence of “the community of nations.” But that phrase is worse than hackneyed and sentimental, it is oxymoronic: Different nations affirm different notions of justice; a community consists of people made cohesive by a consensus about the nature of justice.

President Obama’s second-worst unforced error, second to declaring and then abandoning a “red line” about Syrian chemical weapons, was involving the U.S. military in regime change in Libya. Perhaps this venture appealed to him because it was untainted by any discernible connection with American national interest. He conducted it by “leading from behind,” which he described as U.S. forces “being volunteered by others to carry out missions” in Libya. As George Orwell said, “The great enemy of clear language is insincerity.” …
(Washington Post)