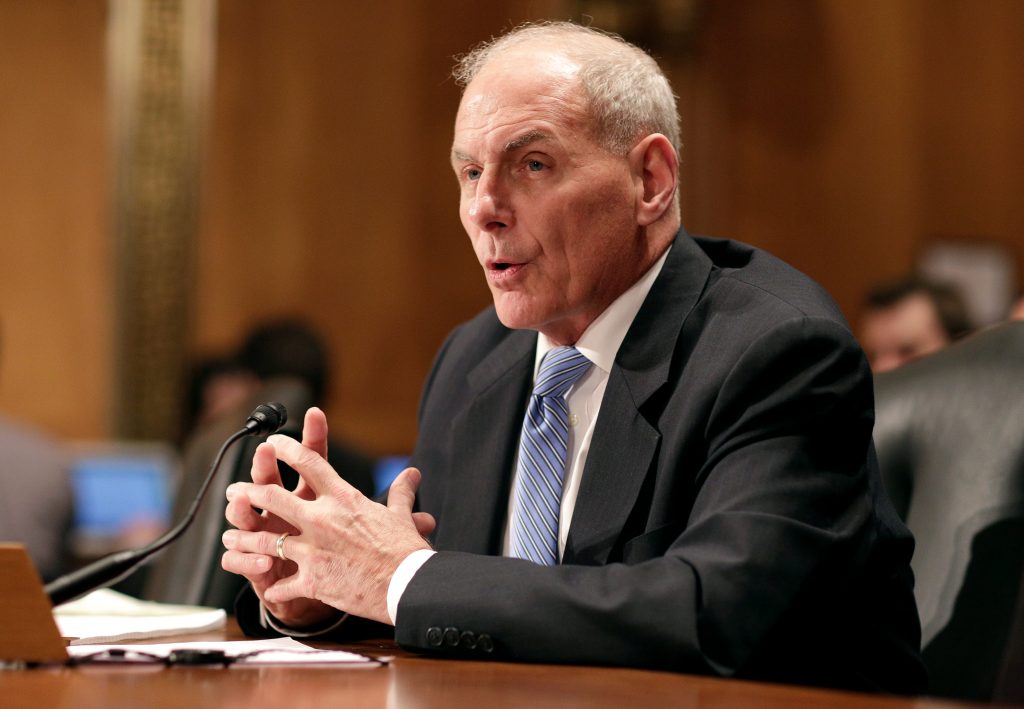 Donald Trump’s choice to lead the Department of Homeland Security favors a wall to secure the border with Mexico but said Tuesday that such a structure alone won’t be enough.

“A physical barrier in and of itself will not do the job,” retired Marine Corps Gen. John Kelly told members of the Senate Homeland Security and Governmental Affairs Committee during a confirmation hearing. “Certainly it has to be a layered approach.”

Kelly said in a lengthy questionnaire to senators that if confirmed as the fifth Homeland Security secretary his top priority would be stopping the “illegal movement of people and things.”

Kelly’s confirmation is almost assured — a reality expressed by both Republican and Democratic senators Tuesday — but members of the committee nonetheless pressed him to specify his stances on immigration enforcement, border security and some of Trump’s more controversial suggestions during the campaign, including the possibility of a registration system for Muslim immigrants.

Kelly told lawmakers he does not support any registration of people in the United States based on ethnicity or religion. He also said he accepts with “high confidence” reports from the intelligence community that Russia attempted to interfere in the 2016 presidential election.

The normally blunt-talking Marine walked a fine line in his answers about how Trump’s Homeland Security Department will carry out efforts to find and deport immigrants living in the country illegally. Asked about the fate of young immigrants protected from deportation by President Barack Obama, Kelly told Democratic Sen. Kamala Harris of California that “the law would guide him” in every decision he will make if confirmed.

He added that he did not anticipate young immigrants who have not committed crimes in the United States being a top enforcement priority.

“There’s a big spectrum of people who need to be dealt with,” Kelly said. “Those categories would be prioritized. I would guess this category might not be the highest priority for removal.”

Kelly is one of several retired generals tapped for top positions by Trump. That has raised some concerns about undue military influence in his administration, weakening the American tradition of civilian control of government.

But Kelly is widely respected by Democrats and Republicans alike. As the former head of the military’s Southern Command, based in South Florida, he routinely worked with the Department of Homeland Security to combat human trafficking and drug smuggling.

In the questionnaire, Kelly said he is committed to telling “truth to power.” The commitment addresses concerns that some lawmakers have about the president-elect’s willingness to take in points of view that clash with his own.

Kelly told the committee that his greatest successes during 40-plus years in the military are “taking care of my people, speaking ‘truth to power,’ and successfully completing every mission I have ever been assigned.” He said he has worked with many senior U.S. officials during his career.

“I never hesitated to disagree with any of them, or make difficult recommendations when appropriate,” Kelly said.

Sen. Claire McCaskill of Missouri, the panel’s ranking Democrat, said his answer was “music to my ears” and promised that Kelly would hear from her often if she didn’t think he was following through on the pledge.

In newly released ethics disclosures, Kelly said that if confirmed he will resign positions with multiple consulting and government contractor firms and defense contractor DynCorp. Kelly listed his salary with DynCorp, a company awarded a 2016 contract from DHS to train Immigration and Customs Enforcement agents, as more than $166,000.

Kelly joined the Marine Corps in 1970. He is a battle-hardened veteran who served three tours in Iraq. He was also the highest-ranking officer to lose a child in combat in Iraq or Afghanistan. His son, Marine First Lt. Robert Kelly, was killed in November 2010 in Afghanistan.