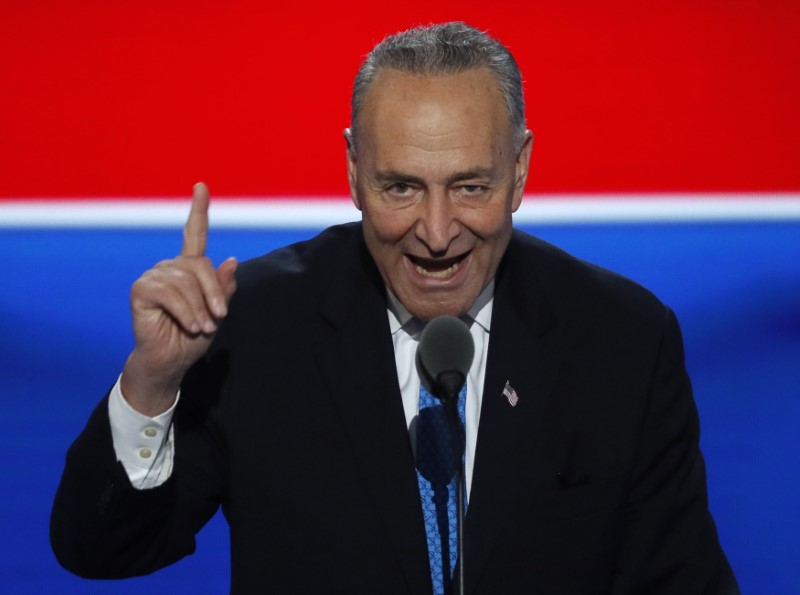 The Senate is moving full steam ahead on President-elect Donald Trump’s Cabinet nominees, and Democrats are clamoring for a fight.

Senate Democrats led by Minority Leader Charles E. Schumer have been calling for ample time before and between hearings so senators can review financial and ethics materials and have enough time for questioning.

“Jamming all these hearings into one or two days, making members run from committee to committee, makes no sense,” Schumer said in a speech Monday. “It is only fair that they are given a thorough and thoughtful vetting.”

Schumer and other Democrats are also calling for hearings to be delayed if the nominees have not filed all of their paperwork with the Office of Government Ethics beforehand.

The OGE on Saturday raised concern about nominees who have not yet completed their ethics review process, though the office did not specify those nominees.

Of the eight nominees with confirmation hearings this week, the OGE has released the ethics agreements and financial disclosures for two of them: Alabama Sen. Jeff Sessions, the attorney general nominee, and Rex Tillerson, the secretary of state pick. The OGE has released transportation secretary-designee Elaine Chao’s ethics agreement but not her financial disclosure report.

Connecticut Democratic Sen. Christopher S. Murphy said it was difficult to know how to approach Trump picks with potentially vast conflicts of interest that have not been fully disclosed.

“This is an unprecedented set of nominees, and we don’t even have the information to make an informed decision yet,” Murphy said. “I think we’re going to make a strong case against some of these nominees, but first they have to tell us … about their huge conflicts of interest.”

Senate Majority Leader Mitch McConnell suggested Sunday that Democrats “grow up and get past that” when asked about the confirmation process on CBS.

“We need to have the president’s national security team in place on Day One. And papers are still coming in,” the Kentucky Republican said. “And so, I’m optimistic that we’ll be able to get up to seven nominees on Day One, just like we did eight years ago.”

McConnell said he would wait to hold a confirmation vote on the floor until all of a nominee’s paperwork had been filed.

Schumer and McConnell have been in talks regarding the timetable for hearings that also accommodate lawmakers’ schedules. For Democrats, these hearings could be their chance to showcase nominees’ financial conflicts of interests or areas where they diverge from Trump’s stated positions.

Democrats will not be able to block any nominee from being confirmed if the 52 Senate Republicans remain united. In 2013, Senate Democrats, led by Minority Leader Harry Reid, changed the Senate rules to eliminate the filibuster for most executive branch nominees, meaning only a majority of senators are necessary to move the nominations forward.

Schumer said questions about whether Democrats may be able to convince a few Republicans to block any nominees are “premature,” noting last week, “We have to have the hearings first.”

Senate Majority Whip John Cornyn was confident last week that all of Trump’s picks would be approved.

“No, thanks to Harry Reid,” the Texas Republican said, when asked if he was worried about any particular nominee’s confirmation prospects. “We’re going to confirm all of them.

“So I think our Democratic friends, they’re going through the stages of grief. First, it was denial and then it’s anger,” Cornyn said. “I just think they need to work through this because they can’t stop the confirmations. All they can do is slow them down and I don’t think that serves the country’s best interest.”

Cornyn said the GOP majority could conduct late-night or weekend sessions if Democrats employ those tactics. He also suggested that slowing down confirmations could become a campaign issue.

“It is also the fact that (in) 2018, a number of Senate Democrats are running for re-election in red states that were carried by Mr. Trump,” Cornyn said. “And if they want to stay here and demonstrate that they’re obstructionists rather than try and work in good faith and get the work done, I think they’ll pay a price for that.”

But Sen. Chris Van Hollen, who chairs the Democrats’ Senate campaign arm, said those senators are demanding transparency and accountability.

“I think everyone expects people to ask questions of people who are going to lead agencies that affect the lives of every American,” the Maryland Democrat said. “So people are going to do their job, which is asking the questions that need to be asked. And also asking, for starters, that people provide the information and records that all of Obama’s nominees provided.”