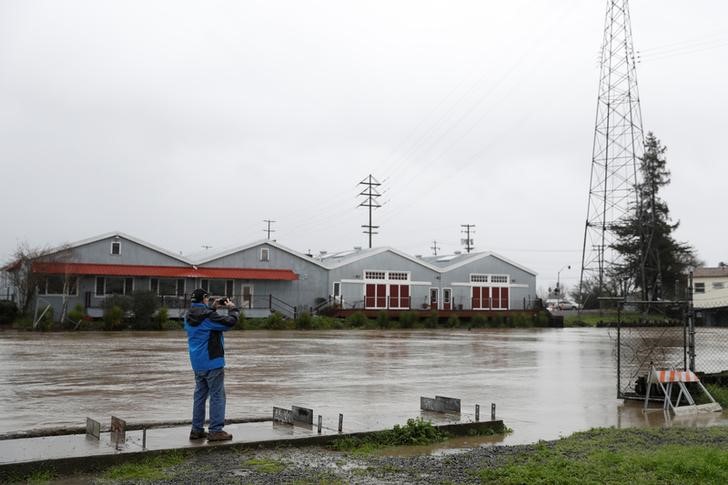 Some California ski areas closed for the second day Monday in the Sierra Nevada over avalanche concerns and power outages, with forecasters warning that more snow and rain was on the way.

In Nevada near Reno, Nevada National Guard high-water vehicles were deployed to help people evacuate from a town.

Over the weekend, toppled trees crashed against cars and homes and blocked roads in the San Francisco Bay Area, and officials rescued stranded motorists from cars stuck on flooded roads.

A giant tree fell across a highway in Hillsborough to the south of San Francisco, injuring a driver who couldn’t break in time and drove into the tree. And a woman was killed Saturday by a falling tree while she took a walk on a golf course.

In California’s famed wine country, the Napa River jumped its banks and flooded vineyards. Rivers in Sonoma Valley north of San Francisco and in Reno, Nevada, both overflowed their banks late Sunday with officials saying the waterways could remain at flood stage for days.

Schools were canceled in Sonoma County, where homes were evacuated, thousands were without power and many roads were unpassable. To the south near Los Angeles, commuters were warned of possible highway flooding and mudslides in hilly areas.

Emergency workers in Nevada voluntarily evacuated residents of 400 homes with about 1,300 residents in a Reno neighborhood as the Truckee River overflowed and drainage ditches backed up.

In the city of Sparks neighboring Reno, Bob Elsen said he never expected so much rain in Nevada’s high desert where only 8 inches of precipitation normally falls each year. He had moved to Sparks from perpetually wet Bremerton, Washington.

“I don’t think I’ve seen this much rain since I moved here six years ago,” Elsen said, watching the Truckee River’s waters rise. “It’s why I moved out of Washington to get away from this stuff.”

The worst flooding in Sparks was expected to send several feet of water early Monday into an industrial area where 25,000 people work.

The back-to-back storms that have hit California and Nevada since last week are part of a so-called “atmospheric river” weather system that draws precipitation from the Pacific Ocean as far west as Hawaii with potentially catastrophic consequences for areas hit with the most rain.

“For forecasters who’ve been here a decade or more, this is one of the most impressive atmospheric setups that we have seen in a long time for potential flooding in the region,” said Chris Smallcomb, a National Weather Service meteorologist in Reno. “If you had to write a textbook on how to get a flood in the region, you would use a scenario just like this.”

Schools were also canceled in Reno and Sparks, and Gov. Brian Sandoval told all non-essential state government workers to stay home on Monday after he declared a state of emergency.

In California’s Calaveras Big Trees State park, a well-known giant sequoia tree known for the huge tunnel carved through its trunk, which cars once passed through, came toppling down, the San Francisco Chronicle reported.

Park volunteer Joan Allday said the tree had been weakening and leaning severely to one side for several years.

“It was barely alive; there was one branch alive at the top,” she told the newspaper.

Farther north, two major highways across the Sierra Nevada were partially closed because of mudslides and roads leading to Yosemite National Park’s valley floor remained were closed amid fears that the Merced River could overflow and cause major flooding.